In Figure 2, a typical reflection spectrum of the fabricated epoxy Bragg grating with a grating period of = 990 nm is depicted employing dynamic Bragg wavelength interrogation. A low signal baseline of about −58 dB is obtained consistently over the considerably broad interrogation range from 1460 nm to 1620 nm. A pronounced fundamental mode as well as higher order mode reflections can clearly be observed around 1550 nm due to the multimode nature of the ~10 µm wide and ~4.5 µm high rectangular strip waveguide. Both fundamental and higher order mode reflections exhibit a distinct peak splitting into TE (transverse electric) and TM (transverse magnetic) modal reflection signals indicating severe birefringence effects inside the polymer material combination. Considering the huge mismatch of thermal expansion coefficients (CTE) between TPX™ (CTETPX ≈ 117 ppm/K) and EpoCore (comparable CTE value of similar epoxy-based photoresist SU8 CTESU8 ≈ 52 ppm), this remarkable peak splitting is—beside inherent material birefringence—most likely due to mechanical stresses introduced during fabrication which expresses in the form of stress induced birefringence. The differing effective refractive index values for the fundamental TE and TM mode reflection amount to neff (TE) = 1.57295 and neff (TM) = 1.57221. All observed signals turn out to be detectable in a highly stable and reproducible way even in mechanically strained condition. Consequently, all existing Bragg grating peaks and their mechanically induced wavelength shifts in time (by changing and ) may be utilized as optomechanical sensor signals in combination with a dynamic Bragg interrogation system for versatile mechanical measurement purposes such as acoustic vibration, acceleration as well as vital sign monitoring as illustrated in Figure 3.

3.2. Sensor Application as an Optical Pickup for Acoustic Instruments

The sensor pad’s TPX™ substrate backside is equipped with a conventional double-sided scotch tape to establish a firm connection to the flat top of a steel-string acoustic guitar body (Art & Lutherie Cedar Dreadnought). In this way, an efficient mechanical transfer of the acoustic vibrations to the Bragg grating is ascertained. The guitar strings are precisely tuned to standard tuning (E2-A2-D3-G3-B3-E4). All six strings are plucked individually, which characteristically stimulates acousto-mechanical oscillations of the guitar’s flat top and the resultant Bragg wavelength shifts of the sensor’s fundamental mode Bragg reflection are recorded. In Figure 4a, the temporal sensor signals for each string are shown together with an enlarged view in Figure 4b illustrating the recorded audio signals. The applied sensor’s signals show typical sinusoidal response with distinct maximum deflections around ~100 pm confirming exact and delicate recording capabilities. Fast Fourier transformation (FFT) of every single audio signal reveals the precise frequencies for the fundamental tone as well for the associated harmonic overtones (in terms of integral multiple of the fundamental frequency).

3.3. Sensor Application as an Optical Accelerometer

In order to acquire the precise sensitivity to acceleration, the sensor pad is clamped unilaterally on top of a mechanical testing machine providing exactly calibrated acceleration values. In response to a sinusoidal acceleration stimulus, the freehanging sensor end is deflected equivalently, thus generating measurable Bragg wavelength shifts by altering and . Thereby, the reproducible peak splitting effect due to the present birefringence is fully utilized to obtain corresponding sensitivity curves for both the fundamental TE and TM mode reflection.
Figure 5 summarizes the pronounced and consequent sinusoidal shifts of the Bragg wavelengths for fundamental TE (Figure 5a) and TM (Figure 5b) modal reflection exemplarily on 15 g, 10 g and 7 g acceleration stimulation with a frequency of 50 Hz attesting the sensor pad a fast and meticulous response. Direct comparison of the two modal sinus signals evidently displays a significantly higher sensitivity of the TM mode Bragg reflection to acceleration. Figure 5c corroborates immaculate, non-interfering signal resolution between TE and TM modal reflection even at a comparably high acceleration impact of 15 g. In Figure 5d, the sensor pad’s modal-dependent sensitivity is expressed in terms of averaged peak-to-peak values (PPV) of the sinusoidal response curves. Both TE and TM mode indicate linear reaction to acceleration with a sensitivity of 107 pm/g and 141 pm/g, respectively. We attribute the intriguingly higher acceleration sensitivity of the TM mode signal to the severe birefringent mechanisms of the waveguide design.

In order to employ the sensor pad for vital sign monitoring purposes in an easy-to-apply way, the TPX™ substrate backside, in turn, is equipped with a double-sided surgical tape to facilitate full skin contact to the test person’s body part of interest. In principal, for medical pulse sign recording several sensor positions near specific major arteries such as aorta, radial artery, carotid, and femoral artery may be considered to cause a change of the effective refractive index and the grating period.
The developed optomechanical sensor’s performance in pulse measurement of a test person is depicted in Figure 6. At first, the sensor pad is placed at the center of the torso for aorta pulse measurement. After that, the radial artery pulse signal is recorded likewise for comparison. The fundamental TE mode reflection is tracked by the dynamic interrogation system. Both observed pulse wave forms agree with the expected shape from a medical point of view. Most notably, all pulse signals in both diagrams are featured with the characteristic dicrotic notch in the pulse wave from heart valve activity indicating accurate sensor operation. The frequencies of the exemplified pulse measurements amount to 90 bpm (aorta) and 75 bpm (radial artery), which may be temporally monitored by continuous averaging.
Aiming at simultaneous vital sign monitoring of both respiration and pulse, the sensor pad is placed below the left chest side in the xiphoid level area enabling additional mechanical sensing of the abdominal wall movement. The sensor’s special position is schematically depicted in Figure 7. Accordingly, the resulting recorded Bragg wavelength signal comprises the respiration wave as well as the superimposed pulse wave from aorta blood pressure. The huge change of the Bragg wavelength in the order of hundreds of picometers represents the test person’s respiration cycle. The typical form of the periodic pulse wave can be clearly recognized in the enlarged inset. Consequently, by the use of suitable filter algorithms the pulse frequency as well as the respiration frequency can be determined independently and monitored concurrently in a single measurement.

We thank Maiko Girschikofsky and Stefan Belle (both from the applied laser and photonics group Aschaffenburg) for fruitful discussions. 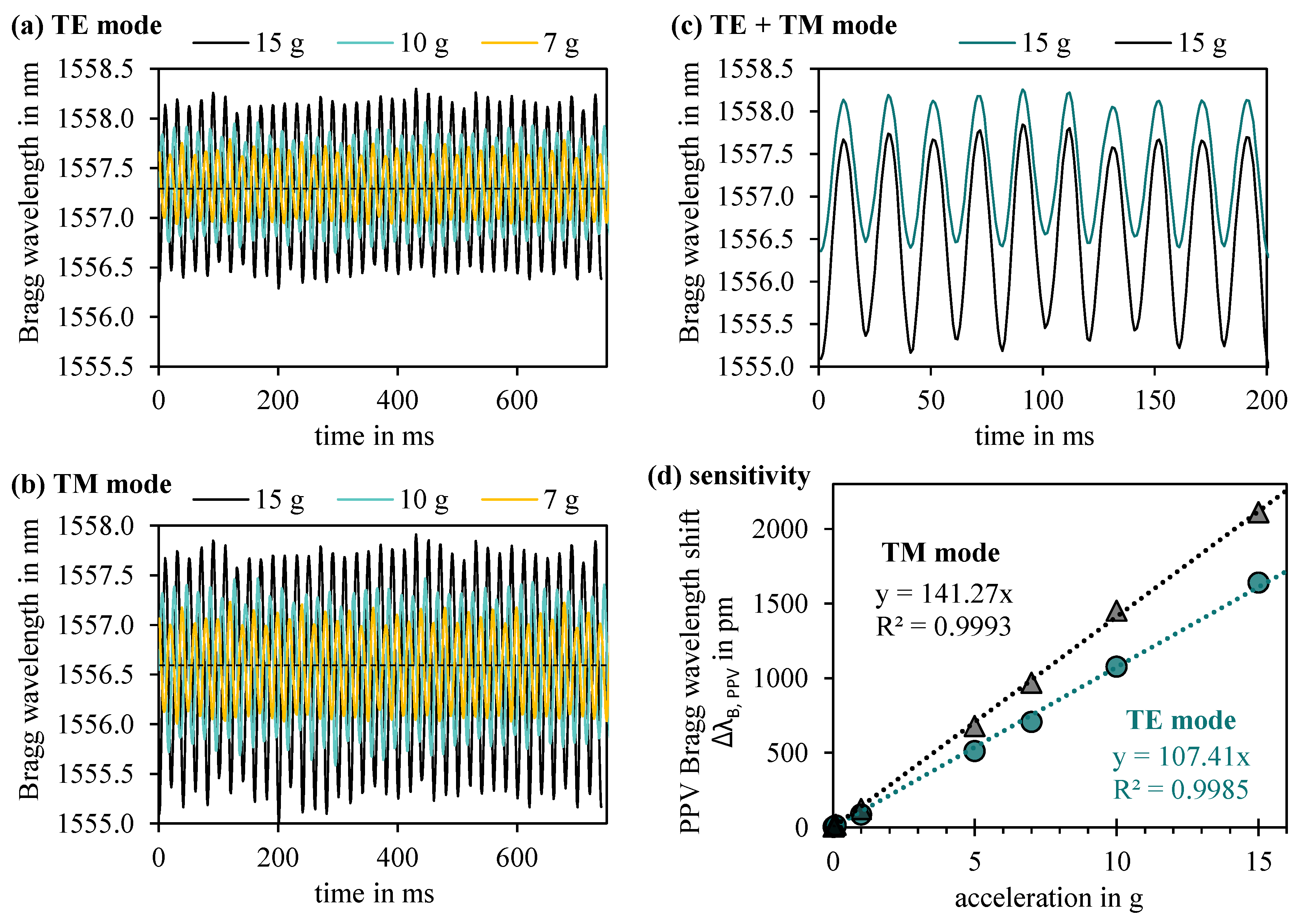 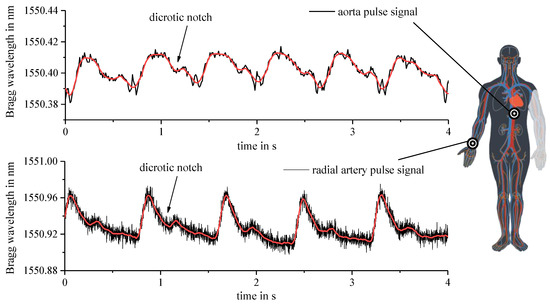