This paper proposes a new two-stage machine learning approach for bridge damage detection using the responses measured on a passing vehicle. In the first stage, an artificial neural network (ANN) is trained using the vehicle responses measured from multiple passes (training data set) over a healthy bridge. The vehicle acceleration or Discrete Fourier Transform (DFT) spectrum of the acceleration is used. The vehicle response is predicted from its speed for multiple passes (monitoring data set) over the bridge. Root-mean-square error is used to calculate the prediction error, which indicates the differences between the predicted and measured responses for each passage. In the second stage of the proposed method, a damage indicator is defined using a Gaussian process that detects the changes in the distribution of the prediction errors. It is suggested that if the bridge condition is healthy, the distribution of the prediction errors will remain low. A recognizable change in the distribution might indicate a damage in the bridge. The performance of the proposed approach was evaluated using numerical case studies of vehicle–bridge interaction. It was demonstrated that the approach could successfully detect the damage in the presence of road roughness profile and measurement noise, even for low damage levels. View Full-Text
Keywords: drive-by; bridge; damage detection; machine learning; artificial neural network drive-by; bridge; damage detection; machine learning; artificial neural network
►▼ Show Figures 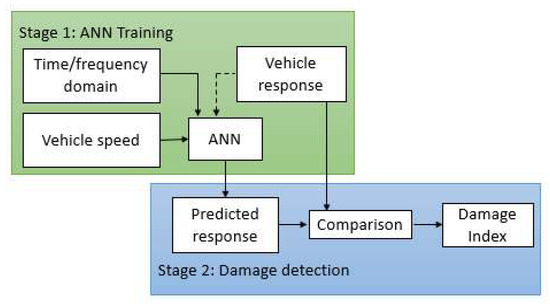