Modeling the Influence of Oil Film, Position and Orientation Parameters on the Accuracy of a Laser Triangulation Probe

Due to the advantages of high speed, high accuracy, and full light field, fringe projection profilometry (FPP) based on structured light sensor [1,2,3] has become the most promising three-dimensional (3D) data acquisition technique in many fields, such as quality control [4,5,6], reverse engineering [7,8], and others [9,10,11]. Generally, the system of fringe projection profilometry consists of one camera and one projector. There are three steps to obtain the 3D data of the object measured by FPP. First, the designed fringe patterns are projected onto the surface of measured object one by one and the deformed fringes are captured by the camera simultaneously. Secondly, the phase information can be calculated by the deformed fringes. Finally, the 3D point cloud of the measured object can be reconstructed accurately with the calibrated parameters of the system [1,2,3]. The 3D data can provide an effective evaluation mean for surface inspection, precision manufacturing, automatic assembly, and other fields. The literature [1,2,3,6] shows that FPP is more suitable for diffuse reflective surfaces and the surface reflectance changes little. However, when objects with high dynamic range (HDR) were measured directly by FPP, some saturated regions will appear in fringe images, which challenge the completeness of phase information and measurement accuracy.
Addressing that it is difficult to improve the dynamic range by hardware for the most camera sensors [6], many experts have carried out a series of approaches to solve the HDR measurement problem. The methods can be divided into several categories: multi-exposure method [12,13,14], light intensity adjustment method [15,16], color invariance method [17,18,19], polarization method [20,21,22], adaptive fringe pattern method [23,24,25,26,27], and others [28,29]. Considering that the dark regions and bright regions of the fringe image require different exposure times, multi-exposure method becomes a way for HDR problem [12,13,14]. Zhang [12] proposed an HDR scanning technique. The brightest but not saturated pixels were chosen from a set of fringe images with decreasing exposures to generate the new fringe images. Song [13] proposed an active reflection suppression method by multiple exposure image fusion to achieve high-precision 3D measurement. However, for the multi-exposure method, the required number of exposures and each exposure time depend seriously on human experience, and there is still a lack of quantitative way to choose an appropriate exposure time. The light intensity adjustment method is another way applied for HDR problem [15,16]. Kofman [15] projected a series of fringe patterns with decreasing maximum input gray value onto the object surface. The maximum gray value but not saturated pixels were used to synthesize the fringe images. For improving the signal-to-noise ratio for low reflective surface, Babaie [16] proposed a method to improve the dynamic range of fringe projection system to measure the objects with varying surface reflectivity. Similar to the multi-exposure method, this method needs to project a large number of different intensities, so the projection efficiency is very low. Color invariance method has also been proposed to solve the HDR measurement [17,18,19]. Benveniste and Ünsalan [17] applied color invariant method to solve the problem of scanning bright surfaces under different ambient illuminations. Chen [18] proposed a fringe pattern projection method by fusing different color patterns from multi-viewpoints. However, the accuracy of color invariance method is limited [29]. The polarization methods have been developed to handle the shiny surface problem [20,21,22]. In [24], epipolar images with speckle patterns were utilized to eliminate the effects of inter-reflections. The authors of [22] presented a specularity removal method based on polarization imaging through global energy minimization. Obviously, polarization methods require additional hardware and are time-consuming. The adaptive fringe pattern method is another solution, which computes the optimal illuminations according to the correspondence of camera–projector [23,24,25,26,27]. For the problem of strong internal reflection, Xu and Aliaga developed an adaptive corresponding algorithm [23], which may take hours to inspect an unknown scene. Li and Kofman [24] proposed an adaptive fringe pattern projection method by adapting the maximum input gray level. Lin presented a fast 3D shape measurement technique to improve the signal-to-noise ratio during the measurement [25]. Farahi [26] put forward an inverse projected-fringe technique for on-machine inspection, based on the correspondence of projector-part-camera. Zhang [27] studied a method to calculate several groups of fringe patterns with optimal light intensities generated based on the intensity response function of camera. However, when calculating the optimal light intensity, the threshold of reflectivity component must be set manually. From the perspective of projection efficiency, the adaptive fringe pattern method can achieve better results for HDR problem.
However, most methods mentioned above belong to monocular fringe projection system, which are sensitive to image saturation and projection non-linear gamma effect. In order to improve the projection efficiency and reduce the influence of image saturation and gamma non-linear effect, combining with the advantages of binocular vision and monocular fringe projection, we propose an adaptive binocular fringe dynamic projection method by adjusting adaptively the pixel-to-pixel projection intensity. First, the flowchart of adaptive binocular fringe dynamic projection method is presented in detail. Then, an adaptive optimal projection intensity method based on multi-threshold segmentation is presented to adjust the projection illumination. Finally, mapping correspondence of binocular saturation point and projection point is established to modify the projection gray-level of saturation point.
The organization is as follows. Section 2 introduces the basic principle of FPP. In Section 3, adaptive binocular fringe dynamic projection method is explained in detail. The experimental results are given in Section 4. Conclusions are presented in the last section.

In order to expand the application scope of fringe projection technology, this section explains the adaptive binocular fringe dynamic projection method (ABFDP) for the problem of image saturation in HDR measurement. In order to enhance the acquisition range of point cloud and reduce fitting error [31,32], the binocular vision with fringe projection is selected in this paper with the advantages of high precision and non-gamma effect of projector.

The flowchart of the proposed adaptive binocular fringe dynamic projection method is shown in Figure 1. The main steps are as follows.
Compared with other HDR methods [23,24,25,26,27], ABFDP method extends high dynamic range measurement from monocular fringe projection to binocular fringe projection. The intensity modification mask is calculated without pre-known geometry information. The proposed ABFDP method reduces the number of fringe patterns and the number of projection iterations, which avoids complex matrix calculation and improves the projection efficiency. The ABFDP method can adaptively calculate the optimal projection intensity through multi-threshold segmentation of surface reflectivity. The adaptive projection pattern can be automatically updated for different objects. The mapping relationship of binocular saturation point and projection point is established by binocular transformation and left camera–projector mapping.

In this section, we try to further evaluate the proposed method. All simulations listed here are implemented in Matlab R2018b on a laptop equipped with 2.50 GHz CPU and 4G RAM memory. To verify the performance of our method, we built a fringe projection system consists of a digital light processing (DLP) projector (model PDC03, Fuzhou Giant Vinda Photoelecyric Technology CO. LTD. China) with a projection speed of 30 fps and 1280 × 800 pixels, and two industrial CMOS cameras (model: IDS UI-3370CP-M-GL, produced by the company of IDS Imaging Development Systems GmbH in Obersulm, Germany). The cameras have a resolution of 2048 × 2048 pixels at a frame rate up to 80 fps. The fitting of point cloud data obtained to calculate the diameters in this experiment is processed by Geomagic Studio® 2013 which made by Geomagic, Inc., USA. A photograph of the experiment system is shown in Figure 4. This system was calibrated before the experiment. Experiments were conducted to verify the validity of the proposed method.

In this study, in order to solve the HDR measurement problem, an adaptive binocular fringe dynamic projection method was proposed to reduce the number of fringe patterns, which also avoids the complex matrix calculation. A novel adaptive optimal projection intensity method based on multi-threshold segmentation was established to reduce the projection gray-level according to the reflectivity information of saturated points. The mapping relationship between binocular saturation points and projection points was obtained by binocular calibration and camera–projection transformation relationship. Experimental results demonstrated that the proposed ABFDP method has the ability to precisely measure HDR objects.
The proposed method also shares some limitations, similar to most 3D reconstruction methods based on FPP. When the objects near specular reflection, the captured fringe images are always saturated even though a little light intensity, which should be addressed in the future.

This research is jointly supported by the National Natural Science Foundation of China (No. 51705485), and Key Pre-research Project of China Academy of Engineering Physics (No. TB11, TB23, K1156).

The authors would like to thank the anonymous reviewers for their valuable comments. 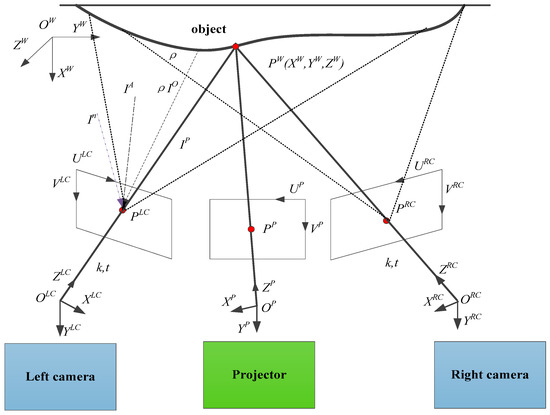 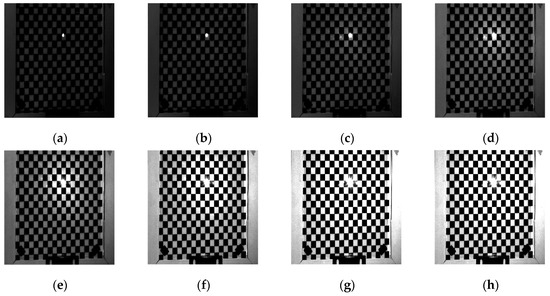 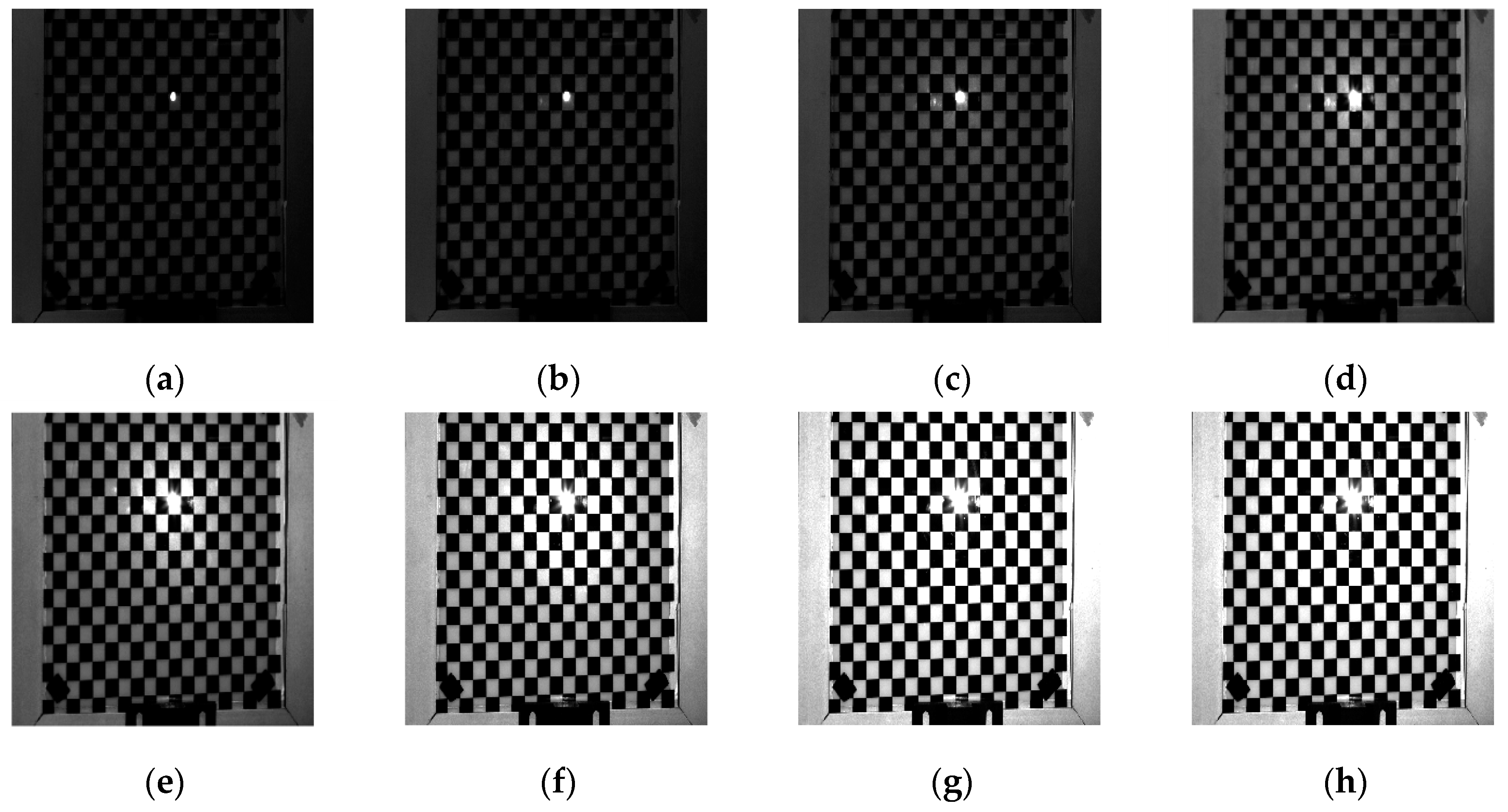 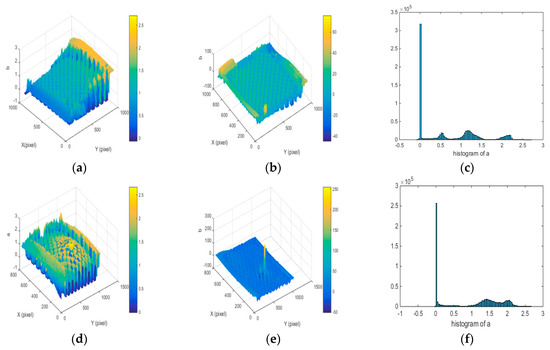 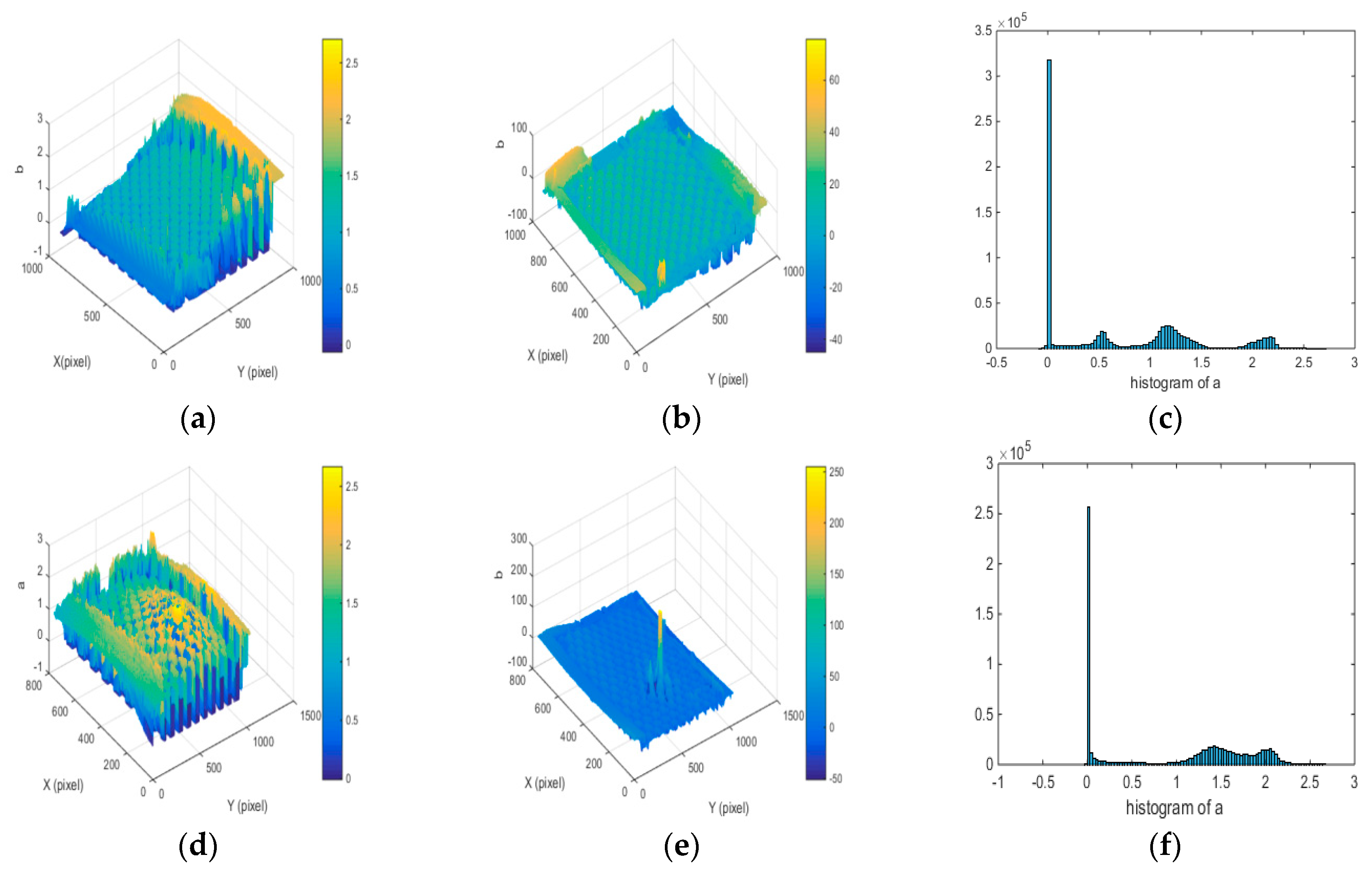 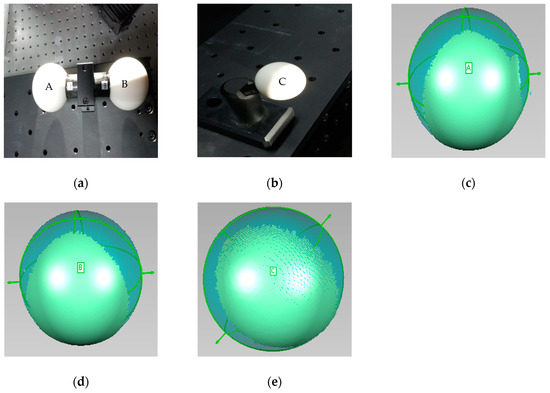 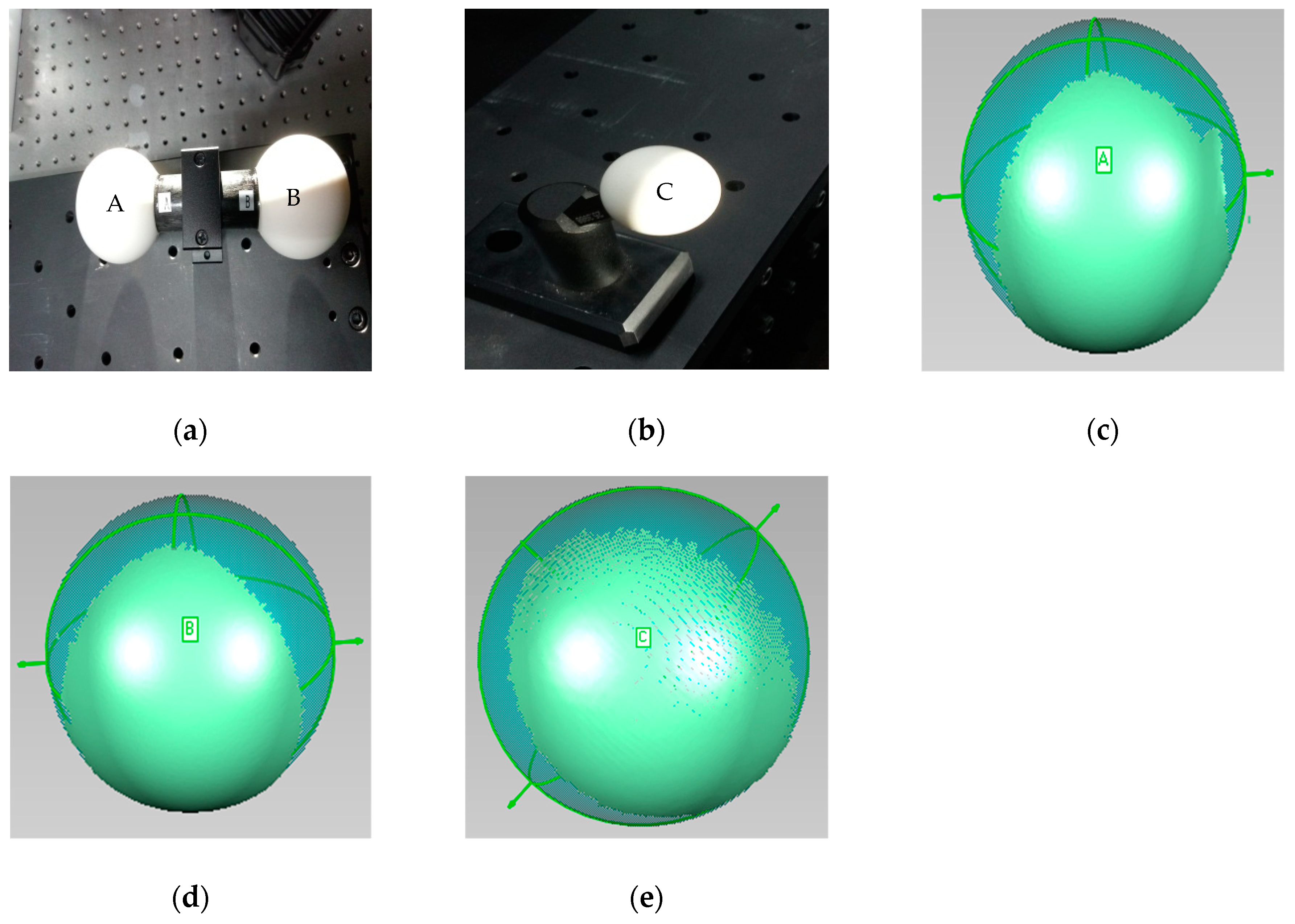