Have I Seen This Place Before? A Fast and Robust Loop Detection and Correction Method for 3D Lidar SLAM
Next Article in Special Issue

A complete picture of the deformation characteristics (distribution and evolution) of the geotechnical infrastructures serves as superior information for understanding their potential instability mechanism. How to monitor more completely and accurately the deformation of these infrastructures (either artificial or natural) in the field expediently and roundly remains a scientific topic. The conventional deformation monitoring methods are mostly carried out at a limited number of discrete points and cannot acquire the deformation data of the whole structure. In this paper, a new monitoring methodology of dam deformation and associated results interpretation is presented by taking the advantages of the terrestrial laser scanning (TLS), which, in contrast with most of the conventional methods, is capable of capturing the geometric information at a huge amount of points over an object in a relatively fast manner. By employing the non-uniform rational B-splines (NURBS) technology, the high spatial resolution models of the monitored geotechnical objects can be created with sufficient accuracy based on these point cloud data obtained from application of the TLS. Finally, the characteristics of deformation, to which the geotechnical infrastructures have been subjected, are interpreted more completely according to the models created based on a series of consecutive monitoring exercises at different times. The present methodology is applied to the Changheba earth-rock dam, which allows the visualization of deformation over the entire dam during different periods. Results from analysis of the surface deformation distribution show that the surface deformations in the middle are generally larger than those on both sides near the bank, and the deformations increase with the increase of the elevations. The results from the present application highlight that the adhibition of the TLS and NURBS technology permits a better understanding of deformation behavior of geotechnical objects of large size in the field. View Full-Text
Keywords: earth-rock dam; 3D visualization; deformation monitoring; terrestrial laser scanning (TLS); NURBS earth-rock dam; 3D visualization; deformation monitoring; terrestrial laser scanning (TLS); NURBS
►▼ Show Figures 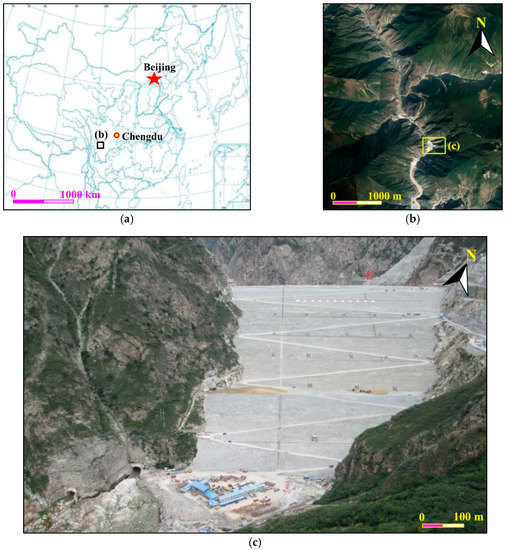