Electrocardiogram signal analysis is based on detecting a fiducial point consisting of the onset, offset, and peak of each waveform. The accurate diagnosis of arrhythmias depends on the accuracy of fiducial point detection. Detecting the onset and offset fiducial points is ambiguous because the feature values are similar to those of the surrounding sample. To improve the accuracy of this paper’s fiducial point detection, the signal is represented by a small number of vertices through a curvature-based vertex selection technique using polygonal approximation. The proposed method minimizes the number of candidate samples for fiducial point detection and emphasizes these sample’s feature values to enable reliable detection. It is also sensitive to the morphological changes of various QRS complexes by generating an accumulated signal of the amplitude change rate between vertices as an auxiliary signal. To verify the superiority of the proposed algorithm, error distribution is measured through comparison with the QT-DB annotation provided by Physionet. The mean and standard deviation of the onset and the offset were stable as ms and ms, respectively. The results show that proposed method using small number of vertices is acceptable in practical applications. We also confirmed that the proposed method is effective through the clustering of the QRS complex. Experiments on the arrhythmia data of MIT-BIH ADB confirmed reliable fiducial point detection results for various types of QRS complexes. View Full-Text
Keywords: electrocardiogram; QRS complex; fiducial point; polygonal approximation; dynamic programming; QT-database; MIT-BIH arrhythmia database electrocardiogram; QRS complex; fiducial point; polygonal approximation; dynamic programming; QT-database; MIT-BIH arrhythmia database
►▼ Show Figures 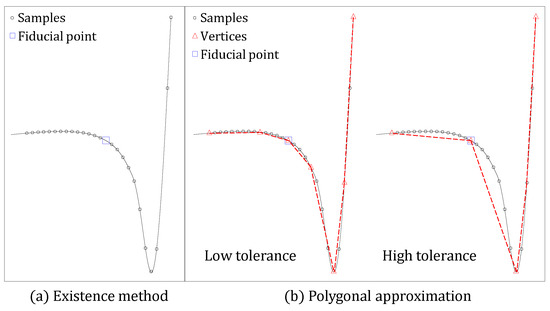