Cavity optomechanics exploring the radiation pressure force between the mechanical and optical modes have attracted considerable attention and progressed enormously over the past decades [1,2,3,4,5]. A typical optomechanical system consists of a high-Q Fabry–Perot cavity with one movable mirror that is treated as a mechanical oscillator. This novel subject has created a new perspective to investigate light–matter interaction via radiation–pressure coupling between the mechanical degrees of freedom and the optical cavity mode [3]. The development of cavity optomechanics has opened up avenues for providing a novel platform for many important applications, ranging from the ground-state cooling of mechanical motion [6,7,8] and manipulation of light propagation [9,10,11] to photon (phonon) blocking [12,13,14]. In particular, with the development of nanophotonics, cavity optomechanical systems provide a unique platform to explore new availability for the precision measurement of weak force due to their important properties of small mass and high integrability [15,16,17,18,19,20].
In recent years, investigations of optomechanical nonlinearity [21,22,23] have become a research hotspot, and many interesting phenomena have been revealed. As a fascinating nonlinear phenomenon, high-order sideband generation [24,25,26] is not only of great significance in studying nonlinear characteristics of photon–phonon interaction, but also plays an indispensable role in excavating the potential applications of optomechanical systems. The process of high-order sideband generation is analogous to Stokes and anti-Stokes Raman scattering processes. By pumping the cavity field at frequency , sidebands in the spectrum are created at due to the radiation–pressure coupling of the photons with the mechanical motion. Here, is the angular frequency of the mechanical oscillator and the integer n represents the sideband order. Specifically, if the pump is red-detuned such that the upper sideband frequency is matched with the resonance frequency , the anti-Stokes scattering is resonantly enhanced. Conversely, if the pump is blue-detuned such that the lower sideband frequency is matched with , the Stokes scattering is resonantly enhanced. In addition, the rate of the Stokes and anti-Stokes scattering per phonon is proportional to the number of photons in the optical cavity. Note that the optomechanical nonlinearity originating from radiation–pressure coupling between the cavity mode and the mechanical mode can be substantively strengthened by atomic assistance [27,28]. The physical mechanism can be explained as follows: under specific parameter conditions, stimulated by the two-level atoms trapped in the optical cavity, the photon number in the cavity field will be greatly increased. Simultaneously, the distribution of photon number in the cavity field will be modified, and the radiation pressure coupling between the photon and the mechanical mode will be strengthened. Ultimately, the higher-order sidebands generation output from the cavity field will be greatly reinforced [25].
Some previous studies [29,30] have shown that optomechanical nonlinearity is more sensitive to weak force, which have an attractive application prospect in precision measurement. In Ref. [31] the high-order sideband generation shows a strong dependence on Coulomb interaction, and a proposal of detecting charge based on a Coulomb-interaction-dependent effect is proposed. However, this Coulomb-interaction-dependent effect is non-monotonic and can only been observed when the charge number is large enough, which severely limits the measurement accuracy of the charge sensor. In the present work, we report on a novel detection method that allows us to measure the charge number with an unprecedented sensitivity. Here, two dependent effects of the high-order sideband generation (i.e., Coulomb-interaction-dependent effect [31] and atom-assisted-dependent effect [25]) are combined. We reveal that the high-order sideband generation can not only be dramatically strengthened by atomic assistance, but also reveals a strong dependence on charge number. Furthermore, the sideband cutoff order and the charge number satisfy a monotonically increasing relationship, which is more sensitive than the atom-free case discussed previously. Calculations show that the sensitivity of the charge sensor in our scheme is improved by about 25 times. In particular, based on the current experimental conditions, we believe that the proposed scheme of a highly sensitive charge sensor will be highly accessible in experiments.

The charge sensor model is based on a hybrid atom–cavity optomechanical system, as schematically shown in Figure 1, in which one mirror of the cavity is movable and is treated as a mechanical oscillator. N identical two-level atoms with the transition frequency are located within the cavity field, and the Hamiltonian of these two-level atoms can be written as = , where = for is the electronic projection operator and is the population operator of the i-th atom. In the present work, we presume that most of two-level atoms are originally prepared in the ground state. Therefore, the average number of the atoms in the excited state is a small fraction of the total atoms number N. Under the weak excitation, the condition of the Holstein–Primakoff approximation [32] is satisfied. Therefore, we can define as an effective transition operator [33]. represents the total coupling strength between the atomic en bloc and the cavity field, where g is the single-atom vacuum Rabi frequency. The mechanical and cavity modes are coupled as = , where G is the optomechanical coupling strength and () indicates the annihilation (creation) operator of the cavity field. In analogy to nanoelectromechanical systems, the Coulomb interaction can also be introduced to an optomechanical system. A typical configuration is shown in Figure 1, in which a tiny charged object is attached to the mechanical oscillator. In experiment [34,35], an ensemble of nitrogen-vacancy centers and electric charges can be embedded in a single crystal diamond nanobeam. In the same way, an ultra-miniature charged body can also be embedded in the movable mirror of the cavity in the lab. The Hamiltonian of the Coulomb interaction be written as = , with the electrostatic force constant, and respectively the charge number of the mechanical oscillator and the charged body, and r the distance between the mechanical oscillator and the charged object. For simplicity, we assume that the charge of the mechanical oscillator is changeless and the variation of can be written as = , with e the elementary charge and the charge number.
In this work, the system is driven by a strong control field with frequency and a weak probe field with frequency . Applying the rotating wave approximation, viz., , the evolutionary dynamics of this hybrid optomechanical system can be well depicted by the Heisenberg–Langevin equations as: where () is the momentum (position) operator of the mechanical oscillator with the effective mass m and angular frequency . = is the detuning of the cavity field and the two-level atoms with respect to the driving field, respectively. are the amplitudes of the input field with the power of the control field, and the power of the probe field. = + is the total decay rate of the cavity field containing an intrinsic loss rate and an external loss rate [3]. The decay rates of the mechanical oscillator and the two-level atom are introduced classically. The thermal noise of the mechanical oscillator satisfies the correlation function [37], with the Boltzmann constant and T the temperature of the mechanical oscillator. Additionally, the quantum noise of the cavity field and the two-level atom satisfy the correlation function , , respectively. Here, under the semiclassical approximation, the quantum noise can be dropped safely because their mean values are zero (i.e., , , and ). Here, we need to point out that the photothermal forces [38] in our scheme can be safely ignored because the delay time of the photothermal forces is much larger than the measurement time of the sideband spectrum in the laboratory [9]. All the operators can be reduced to their expectation values, that is, , , , and , because we focus on the average response of the system [1]. Using mean-field approximation, viz., , the Heisenberg–Langevin equations can be written as:
Equation (2) is a group of partial differential equations that can be numerical solved by using the Runge–Kutta method. The output field can be obtained by using the standard input–output notation , where are the effective driven fields. The output spectrum in the frequency domain can be acquired by performing the fast Fourier transform of , that is, , where is the spectrometer frequency of the output field [24]. The physical picture of this transform is that the output field of the system in the time domain can be formally expressed by , where is the n-th transmission coefficient of the output field. After the fast Fourier transform [39], the frequency spectrum of the output field will generate a component at frequencies in the frequency domain where n is referred to as the sideband order.
Note that if , our system is reduced to a traditional optomechanical system with Coulomb interaction, and a proposal for detecting charge based on a Coulomb-interaction-dependent effect has been proposed [31]. Under weak driven fields (about a few mW), the variation of the sideband spectrum is about 11.83% per charge, and the relationship between the sideband order and the charge number is non-monotonic. In this context, we propose a novel scheme for the precision measurement of charge number based on atom-assisted high-order sideband generation in a hybrid optomechanical system, which allows us to measure the charge number with an unprecedented sensitivity. In our scheme, a monotonic relationship between the cutoff order of the sideband spectrum and the charge number is obtained, and the variation of the sideband spectrum is about 300% per charge. Calculations show that the sensitivity of the charge sensor is improved by about 25 times with respect to the atom-free case discussed previously.

To conclude, we demonstrated that the atom-assisted optomechanical system can be employed as a charge sensor with an unprecedented sensitivity. We observed that a strong dependency between the high-order sideband generation and the Coulomb interaction could be greatly reinforced by atomic assistance, and a monotonous relationship between the cutoff order of the sideband spectrum and the charge number was obtained. In addition, the influences of system degrees of freedom on the sidebands generation (e.g., the atom–cavity coupling, the optomechanical coupling, and the atomic detuning) were investigated in detail. Compared to previous charge sensing proposals, our scheme proposed here has some obvious advantages. First, our scheme is expected to achieve accurate detection at the level of single charges because the variation of the sideband spectrum is about 300% per charge, which is improved by about 25 times with respect to the atom-free case discussed previously. Second, our solution is suitable for extremely weak charge measurement environments. A robust Coulomb-interaction-dependent effect arises as long as the charged object has a charge, rather than requiring that the amount of charges exceed approximately 30. Third, the power of the control field, about 0.5 mW, is quite weak. Therefore, our proposed charge sensor can operate in a low-power environment. Finally, we found that the effective adjustment of the sideband spectrum could also be implemented via phase manipulation, which may deepen our understanding of optomechanical nonlinear processes and may provide applications in phase-coherent measurement. Using the current experimental parameters, our results show that atom-assisted high-order sideband generation may provide a novel method to achieve a highly sensitive charge sensor.

Z.-X.L. finished the main work of this manuscript, including deducing the equations, compiling the program, plotting the figures, and drafting the manuscript. H.X. conceived of the idea, participated in the discussion, and provided some useful suggestions.

The authors declare that they have no competing financial interests. 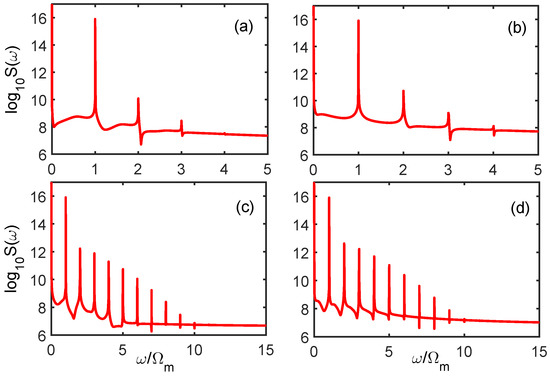 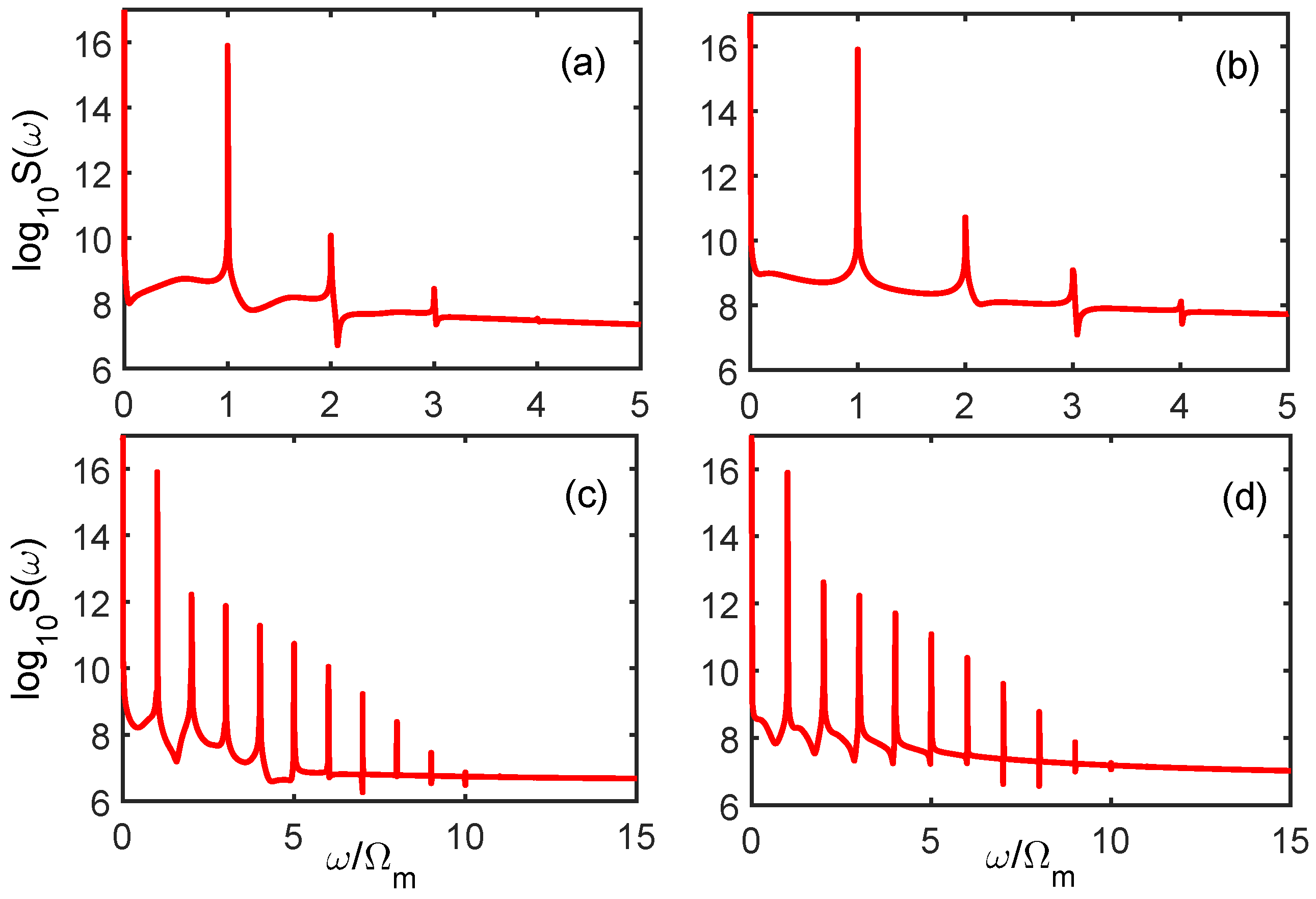 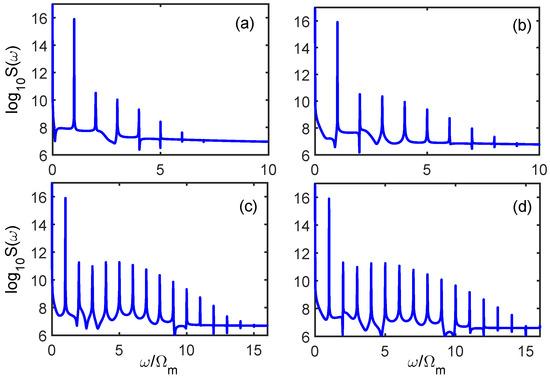 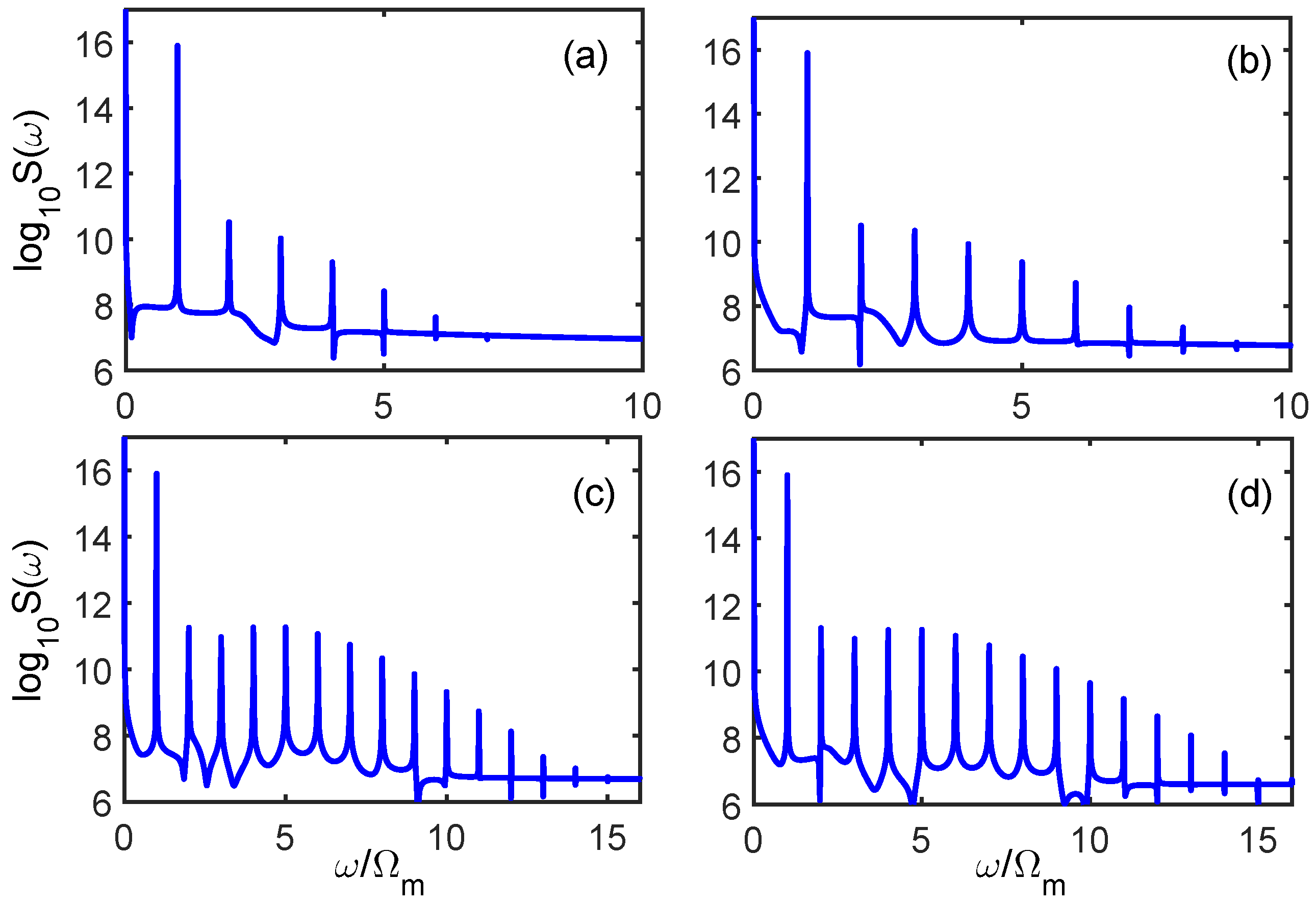 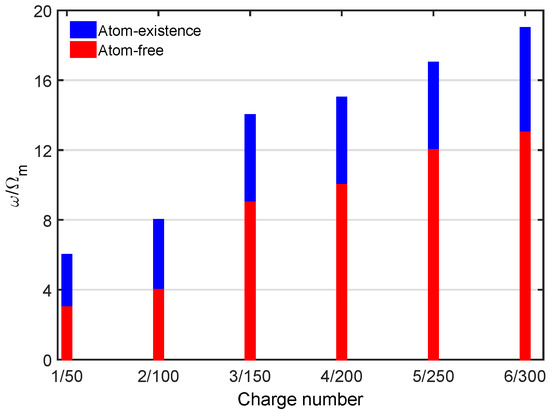 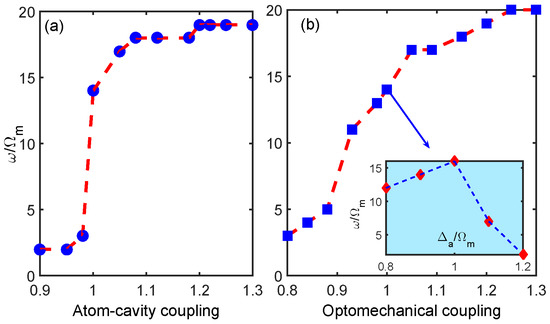 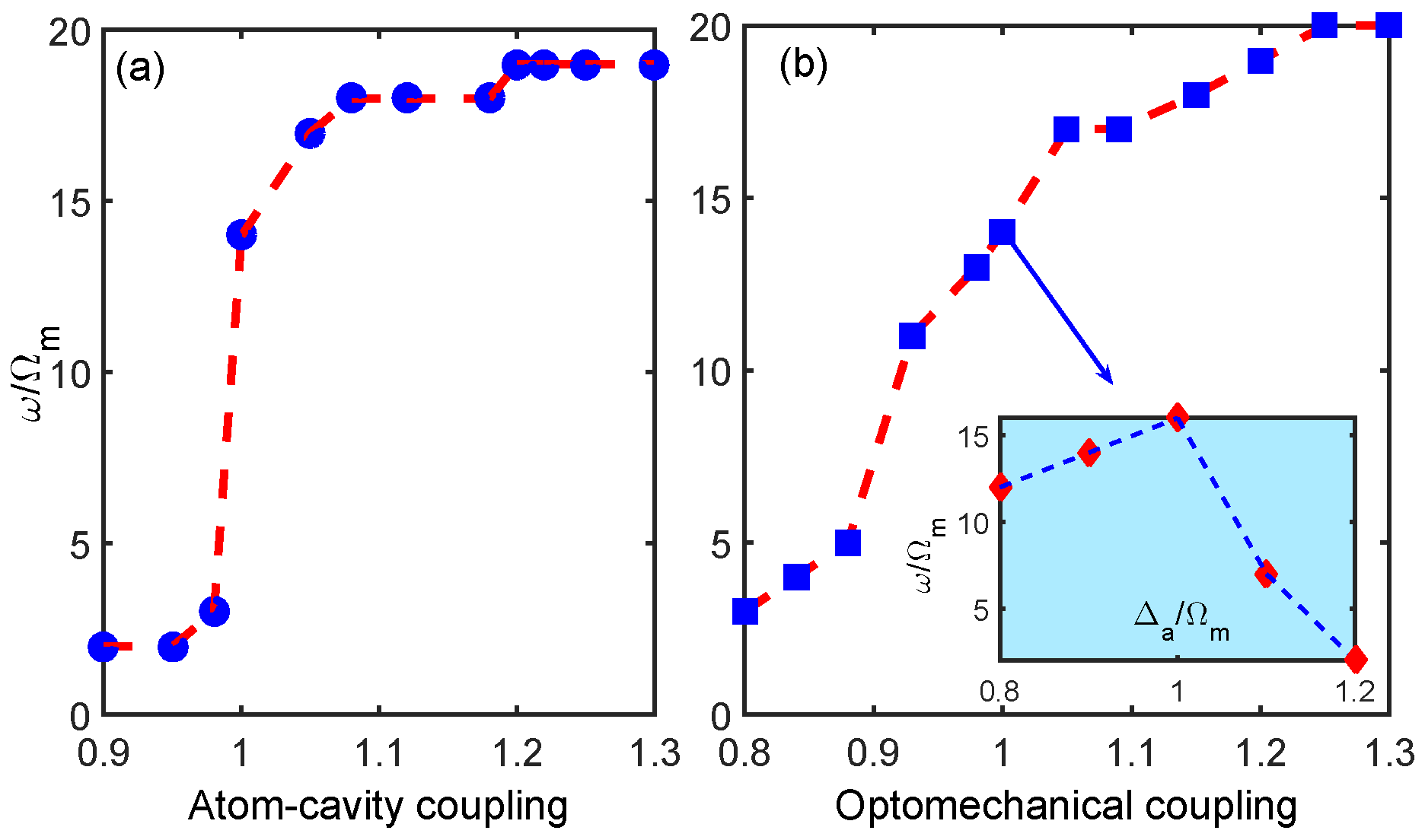 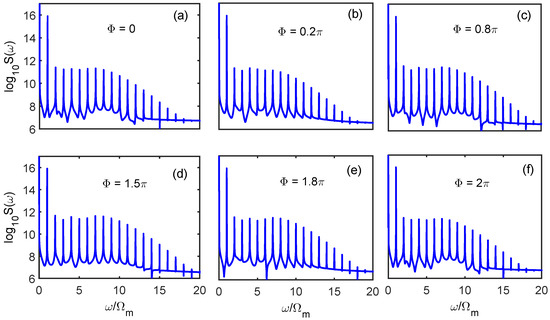 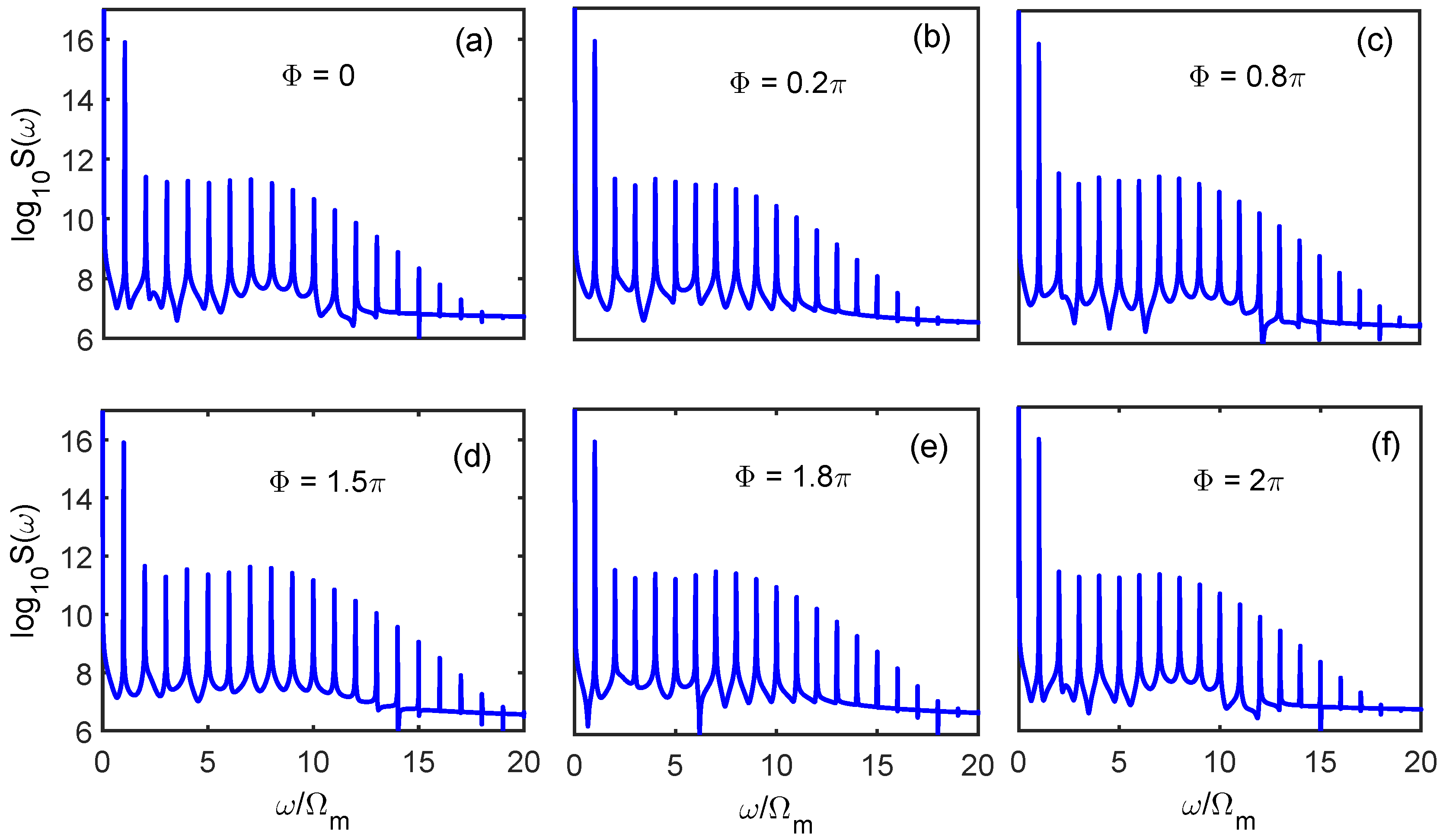