A fiber-optic Fabry-Perot interferometer (FPI) has been proposed and demonstrated for the ultrasound wave (UW) imaging of seismic-physical models. The sensor probe comprises a single mode fiber (SMF) that is inserted into a ceramic tube terminated by an ultra-thin gold film. The probe performs with an excellent UW sensitivity thanks to the nanolayer gold film, and thus is capable of detecting a weak UW in air medium. Furthermore, the compact sensor is a symmetrical structure so that it presents a good directionality in the UW detection. The spectral band-side filter technique is used for UW interrogation. After scanning the models using the sensing probe in air, the two-dimensional (2D) images of four physical models are reconstructed.
Keywords: fiber sensor; Fabry-Perot interferometer; UW imaging; seismic-physical-model fiber sensor; Fabry-Perot interferometer; UW imaging; seismic-physical-model

The ultrasound wave (UW) detection is one of the critical ways for nondestructive testing on seismic physical models (SPM) which effectively bridges theory and field-scale experiments and allows us to obtain the changes of the acoustic response in the absence of a rock matrix and in a nearly ideal setting [1,2,3,4]. The detection of the UW field is traditionally realized by current-driven piezoelectric transducers (PZTs) [5,6,7]. However, this kind of transducer has several inherent drawbacks: the large size provides a poor spatial resolution; the production materials are sensitive to electromagnetic disturbances; the response frequency width is narrow owing to the resonance mechanism; and the sensitivity is small so PZTs must work under the support of the coupling agents, such as water and water-soluble polymer colloids. A considered solution is the optical mean that presents a different UW detection mechanism from PZT. Fiber-optic sensors, as a smart detection technology, have attracted considerable interest for their unique properties, and opened up a multitude of opportunities for single-point UW sensing in hard-to-reach electromagnetic spaces, with controllable cross-sensitivities and very compact size for the embedded measurement, as well as a good UW transmission line [8,9,10,11,12]. In order to realize the imaging of seismic physical model, a fiber sensor with a high UW sensitivity needs to be developed. When the simple spectral band-side filter technique is used for signal interrogation, the UW sensitivity is determined by the spectral slope [13,14]. The fiber Bragg grating (FBG) presents the single narrow resonance spectrum that is sensitive to the dynamic strain which has worked as a UW sensor in water medium [15]. Although further works are going on to improve the sensitivity of the FBG [16,17,18,19,20,21], the large Young’s modulus of the fiber materials and grating size makes the sensitivity promotion to some extent. To date, the FBG’s UW sensitivity is not large enough to realize imaging in air. In comparison, fiber-optic interferometers are more sensitive to the UW due to phase variation interrogation. Among the previous reports, the fiber-optic Fabry-Perot interferometer (FPI) has presented outstanding performances, as along with features such as compact size, flexible structure and high stability (low frequency vibration resistance) [22,23,24,25,26,27]. The UW sensitivity of the FPI is determined by the structure and material of the interference cavity. Specific optical films (thin silica [26], graphene [28], and parylene-C polymer [29]) have been used as sensing surfaces of FPIs for UW detection. However, they usually present low reflectivity (which results in a small signal-to-noise ratio (SNR) response) and complex fabrications, making them hard to apply in UW imaging in air. Therefore, most of the devices mentioned above also need to employ water as a propagation medium to decrease the UW power loss, and require a waterproof packaging technique to ensure the sensitivity and stability of the sensor for a long time in the water. For non-contact, two-dimensional (2D) SPM imaging in air, it is necessary to develop a directional UW sensor with an ultra-high sensitivity to collect UW signals containing the structure information of the scanned block.
In this paper, we propose a FPI-based UW sensor and demonstrate it for SPM imaging in air. The sensor is simple, comprising just a single mode fiber (SMF) inserted into a ceramic tube with the end-face coated with an ultra-thin gold film. A spectral side-band filtering technique is used for UW interrogation at the wide frequency width. Finally, the 2D images of the SPM are achieved by reconstructing the detected UW signals using the time-of-flight approach.

Figure 1a demonstrates the structure and fabrication process of the sensor. It is seen that the end-face of the tube is first coated directly by a 130-nm-thick gold film. A leading-in SMF with a smooth end-face is inserted into the center hole of the ceramic tube. An air gap is formed by the two surfaces of the fiber and gold film, which can be adjusted by changing the insertion depth of the fiber. Once the confiscation is achieved, the input light will be reflected by the two surfaces (fiber end-face and gold film), and finally a well-defined interference spectrum is achieved with a fringe visibility of more than 25 dB (shown in Figure 1b) based on the FPI. Before bonding the gold film, the end-face of the ceramic tube must be clean enough to absorb the gold film closely by the Van Edward force among the molecules. Although the bonding force is weak, it is definitely strong enough to bond the gold film firmly because of its ultra-thin thickness of 130 nm. Compared to the sensor in the previous report [25], the proposed sensor in this work has several potential advantages: the higher reflectivity of the gold film promotes the light reflection, the better antioxidant capacity of the gold film makes the sensor work stably for a long time, and an improved packaging method makes the sensor more stable and sturdy for continuously scanning UW detection.
The sensing mechanism of the UW sensor is characterized theoretically by analyzing the interaction between the UW pressure and the optical interference. In this process, in order to simplify the discussion, we just consider the axial strain of the gold film induced by the UW pressure and ignore the shear stress because of the circular symmetric structure of the sensor and the nano-sized thickness of the gold film. When the UW is applied on the sensor in air, the acoustic pressure will deform the gold film. If the wavelength of the UW is much larger than the sensing region of the gold film, the UW can be regarded as a plane wave, and the UW pressure is represented as where P0 is the amplitude of the applied acoustic pressure, C is the coupling coefficient of the UW-to-gold film, ω is the angular frequency of the UW, t is the response time to the acoustic pressure of the sensor, L is the thickness of the gold film, and λs is the wavelength of the UW in air.
As the UW propagates to the sensor, most of the power is reflected at the air-to-film interface owing to the large acoustic impedance difference between the optical fiber (18.9 kg/(m3·s)) and the air (0.0004 kg/(m3·s), resulting in a transmission coefficient close to 0 and a reflection coefficient close to 1. The acoustic pressure loading makes the film deform, resulting in the cavity length variation of the sensor. The strain of the sensor can be given by where E is the elastic modulus of the gold film. When the thickness of the nanolayer gold film is much smaller than the UW wavelength, the sensor structure’s influence on the UW transmission and acoustic pressure can be ignored. According to Equation (2), the cavity length change of the sensor, which is significantly determined by deformation of the gold film, is obtained by
The analysis above presents that the sensor is a low-finesse FPI. In this case, as the laser is launched into the sensor, the power output of the sensor can be expressed as where Ii is the incident light intensity, R is the reflectivity of the two surfaces of sensor, n is the refractive index of air, L(t) is the cavity length of the sensor, and λ is the laser wavelength.
According to Equation (4), if the sensor works in the quadrature phase bias point that is controlled precisely by adjusting the laser wavelength, the light intensity change with the cavity length change is derived as
Equation (5) clearly shows that the output power of the sensor presents a high dependence on the UW pressure. Here the UW frequency is determined by the PZT source, and thus the output intensity of the sensor is determined by the amplitude of the UW pressure. In Equation (5), the item of can be as simple as
In practical applications, we should make a trade-off between the frequency range and sensitivity of the sensor by choosing suitable structure parameters, such as the sensor length and the thickness and diameters of the gold film.

In this paper, we developed a fiber-optic FPI probe for non-contact UW imaging of SPMs in air. The interrogation of the sensor only requires one PD together with a tunable laser or side-band filter. The 2D images of four model blocks were reconstructed by the proposed UW scanning system. Compared with the PZT imaging device and hydrophone, the FPI probe provides a smaller structure and excellent performances of high sensitivity and spatial resolution. However, unfortunately, the exact frequency bandwidth of the sensor could not be characterized now because of the lack of the PZT sources and matching calibration microphone. Further improvement will be ongoing. 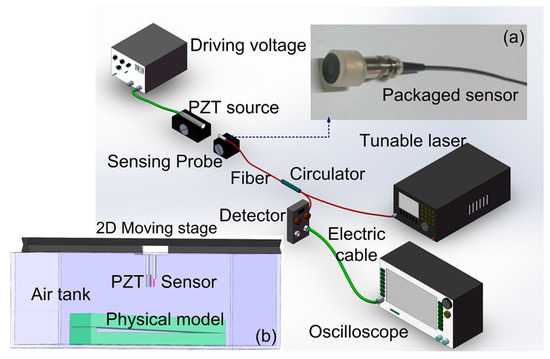 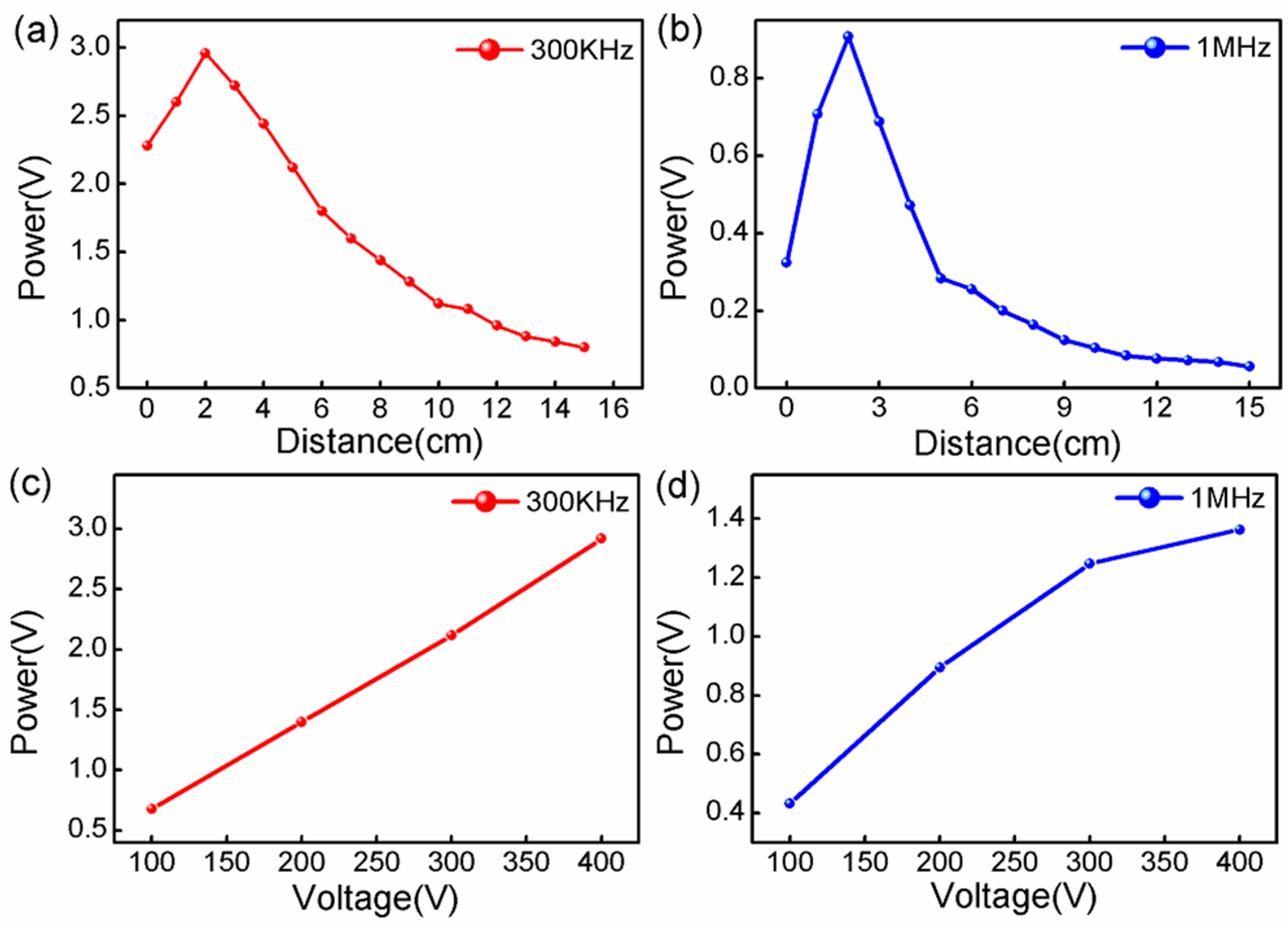