This study proposes a front-end readout circuit as an encoder chip for magneto-resistance (MR) linear scales. A typical MR sensor consists of two major parts: one is its base structure, also called the magnetic scale, which is embedded with multiple grid MR electrodes, while another is an “MR reader” stage with magnets inside and moving on the rails of the base. As the stage is in motion, the magnetic interaction between the moving stage and the base causes the variation of the magneto-resistances of the grid electrodes. In this study, a front-end readout IC chip is successfully designed and realized to acquire temporally-varying resistances in electrical signals as the stage is in motions. The acquired signals are in fact sinusoids and co-sinusoids, which are further deciphered by the front-end readout circuit via newly-designed programmable gain amplifiers (PGAs) and analog-to-digital converters (ADCs). The PGA is particularly designed to amplify the signals up to full dynamic ranges and up to 1 MHz. A 12-bit successive approximation register (SAR) ADC for analog-to-digital conversion is designed with linearity performance of ±1 in the least significant bit (LSB) over the input range of 0.5–2.5 V from peak to peak. The chip was fabricated by the Taiwan Semiconductor Manufacturing Company (TSMC) 0.35-micron complementary metal oxide semiconductor (CMOS) technology for verification with a chip size of 6.61 mm2, while the power consumption is 56 mW from a 5-V power supply. The measured integral non-linearity (INL) is −0.79–0.95 LSB while the differential non-linearity (DNL) is −0.68–0.72 LSB. The effective number of bits (ENOB) of the designed ADC is validated as 10.86 for converting the input analog signal to digital counterparts. Experimental validation was conducted. A digital decoder is orchestrated to decipher the harmonic outputs from the ADC via interpolation to the position of the moving stage. It was found that the displacement measurement error is within ±15 µm for a measuring range of 10 mm. View Full-Text
Keywords: magnetic linear scales; encoder readout IC; programmable gain amplifiers (PGAs); successive approximation register (SAR) analog-to-digital converters (ADCs) magnetic linear scales; encoder readout IC; programmable gain amplifiers (PGAs); successive approximation register (SAR) analog-to-digital converters (ADCs)
►▼ Show Figures 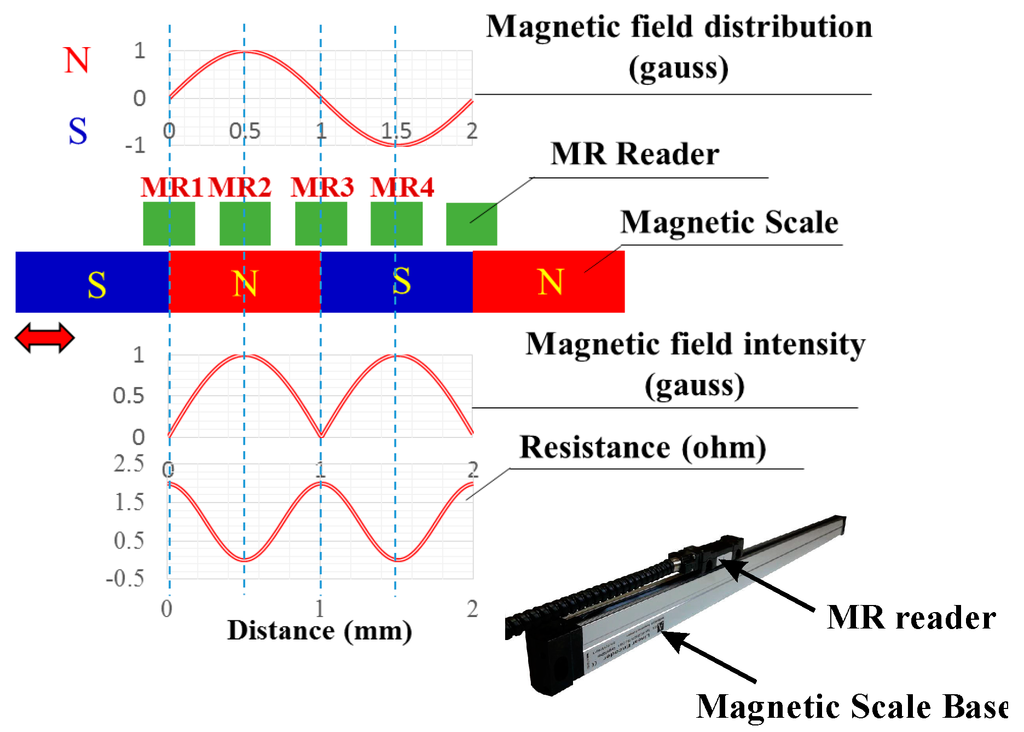