This paper presents an algorithm for velocity-aided attitude estimation for helicopter aircraft using a microelectromechanical system inertial-measurement unit. In general, high- performance gyroscopes are used for estimating the attitude of a helicopter, but this type of sensor is very expensive. When designing a cost-effective attitude system, attitude can be estimated by fusing a low cost accelerometer and a gyro, but the disadvantage of this method is its relatively low accuracy. The accelerometer output includes a component that occurs primarily as the aircraft turns, as well as the gravitational acceleration. When estimating attitude, the accelerometer measurement terms other than gravitational ones can be considered as disturbances. Therefore, errors increase in accordance with the flight dynamics. The proposed algorithm is designed for using velocity as an aid for high accuracy at low cost. It effectively eliminates the disturbances of accelerometer measurements using the airspeed. The algorithm was verified using helicopter experimental data. The algorithm performance was confirmed through a comparison with an attitude estimate obtained from an attitude heading reference system based on a high accuracy optic gyro, which was employed as core attitude equipment in the helicopter.
Keywords: microelectromechanical system (MEMS); inertial-measurement unit (IMU); airspeed; attitude estimation; complementary filter microelectromechanical system (MEMS); inertial-measurement unit (IMU); airspeed; attitude estimation; complementary filter

Attitude control is a fundamental component of a pilot’s control of a helicopter. The use of accurate attitude information is critical to that control. In the past, the mechanical gyroscope was commonly used in navigation equipment. Since then, the fiber optic gyroscope (FOG), or ring laser gyroscope (RLG), have become the most commonly used types of navigation equipment for attitude control. Recently, as the cost of the MEMS inertial sensors has decreased and its performance has improved, their range of utilization has broadened to include equipment used to estimate helicopter attitude. Algorithms for the use of the cost-effective MEMS inertial sensors are increasingly being developed. Many studies have employed the extended Kalman filter, which is often used in the aerospace field [1,2] and considers a linearized model. Nevertheless, its practical application is difficult on account of errors due to the model’s uncertainty and its lack of design intuitiveness [3,4,5].
On the other hand, a simpler type of complementary filter, which considers frequency characteristics, has been applied in various fields [6,7]. When designing the complementary filter for estimating attitude, the attitude value, which is estimated by the accelerometer, is applied with a low-pass filter to remove the high-frequency noise. The other attitude value, derived by the gyroscope output integration, is subjected to a high-pass filter to remove the low-frequency drift. This algorithm is called the all-pass type on account of the merging of the two different attitude values.
The accelerometer measures the respective translation and centrifugal acceleration, as well as the gravitational acceleration. When estimating the attitude using an accelerometer, any acceleration other than the gravitational acceleration acts as a disturbance. Consequently, errors of attitude derived by the accelerometer sometimes increase or decrease according to the flight dynamics. Many studies have thus analyzed both the dynamic characteristics of the application target and adapting the cutoff frequency of the complementary filter. To comprehend the dynamic characteristics, the accelerometer, gyroscope, and external sensor have been used [7,8]. Moreover, a look-up table or fuzzy logic was used as a method for choosing the optimum cutoff frequency in accordance with the dynamics [9,10,11,12]. Nevertheless, these methods can output unexpected results when unexpected dynamics are input. Because they are adapted to specific targets, their utilization is limited.
In this study, airspeed information was used. Thus, disturbance factors, other than the gravitational acceleration, were effectively removed. The subsequent disturbance-free acceleration and angular velocity were used to derive a robust attitude result, even under dynamic conditions, through the design of a simple complementary filter. The data used to verify the proposed algorithm were obtained by experimental flight tests of helicopter. The experiment employed Surion, a utility helicopter developed by Korea Aerospace Industries (KAI, Sacheon, Korea). The performance of the algorithm is confirmed by comparison with an attitude obtained from the attitude heading reference system (AHRS) based on high accuracy optic gyro, which served as the main instrument of the helicopter.

The following equation dictates a vehicle’s equation of motion in terms of specific force, which are the accelerometers reading in body-fixed frame (BFF) [7]:
Equation (1) can be simply expressed as follows: where refers to the acceleration value measured by the accelerometer in BFF, denotes the translational acceleration measured in BFF, represent the angular velocity in BFF, denotes velocity in BFF, refers to the coordinate transformation matrix from navigation frame to BFF, represents the gravitational acceleration in navigation frame, is roll angle, is pitch angle, is yaw angle. and is white noise. This noise can be ignored. When stationary or in a level flight condition (), Equation (2) can be expressed as:
In other words, the accelerometer can measure only the gravitational acceleration. When Equation (3) is rearranged by each axis, the result is as shown in Equation (4). Similarly, under stationary or level flight conditions, the accelerometer measurement can be used to derive the attitude (Equation (5)). However, under dynamic conditions, cannot be ignored. Therefore, Equation (5) becomes ineffective under the same conditions.

A complementary filter for attitude estimation performs low-pass filtering on a low-frequency attitude estimate, obtained from accelerometer data, and high-pass filtering on a biased high-frequency attitude estimate, obtained by direct integration of gyroscope data, and fuses these estimates together to obtain an all-pass estimate of attitude. Although high frequency information of gyroscope is reasonably reliable, low frequency information, which induces drift, is not. On the other hand, the low frequency information of accelerometers is reasonably reliable, while their high frequency information, which induce high sensitivity noise and slow response, is not. Characterized by such adverse response features, the accelerometer and gyroscope can be applied with the all-pass-type complementary filter to enhance the performance. As mentioned above, the all-pass filter combines the low-pass filter and high-pass filter.
Figure 1 presents a block diagram of the complementary filter using the measured airspeed, which enables robust attitude estimation, even in various dynamic situations. To this end, it employs the estimated acceleration that is devoid of disturbance acceleration . Here, refers to the angular velocity measured by the gyroscope in BFF, and time rate of the Euler angles can be obtained through transform matrix (), as shown in Equation (13). In addition, represents the accelerometer-measured value in BFF, and, are the attitude, which are estimated by using the acceleration value that is devoid of the disturbance acceleration. respectively, refer to the integration gain and proportional gain of the filter. are the consequential attitudes estimated by the airspeed-aided complementary filter. Figure 1 can be expressed in Laplace domain as follows: when Equation (15) is arranged from Equation (14), it can be respectively expressed by using the high-pass filter (HPF) part and low-pass filter (LPF) part:

In this study, airspeed information was used and thus disturbance factors, other than the gravitational acceleration, were effectively removed from helicopter attitude estimations. Considering the helicopter environment, the disturbance acceleration equation was derived, and the disturbance acceleration was removed accordingly.
By designing a complementary filter that merges the acceleration that is devoid of disturbance with the gyroscope measurements, accurate estimations were effectively estimated, even under dynamic conditions. The experiment employed a Surion, a developed utility helicopter by Korea Aerospace Industries (KAI). The performance of the algorithm is confirmed by comparison with an attitude obtained from the attitude heading reference system (AHRS) based on high accuracy optic gyro, which serves as the main instrument of the helicopter.

This research was supported by a grant (10050551) from the R&D Program in Aerospace Parts and Materials funded by the Ministry of Trade, Industry and Energy of the Korean Government. 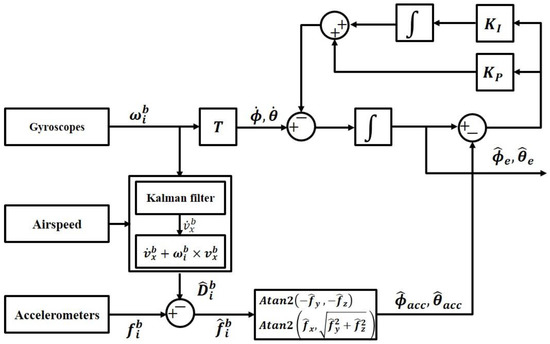 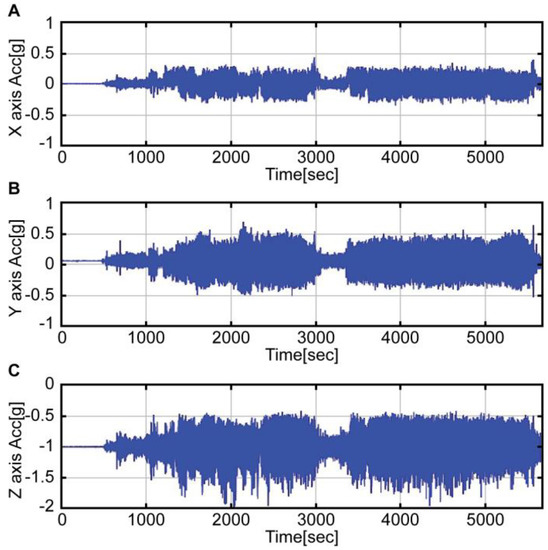 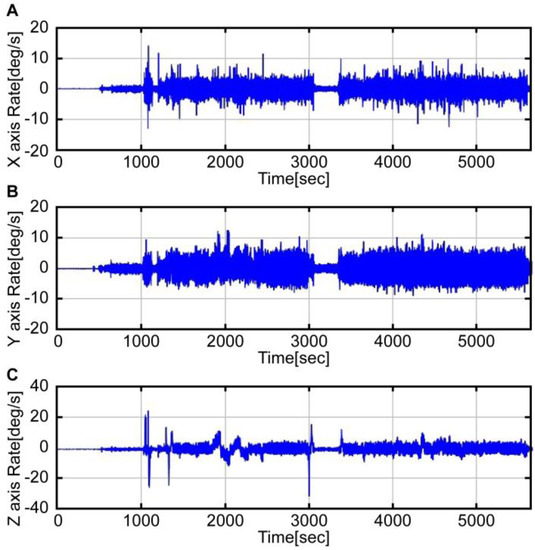 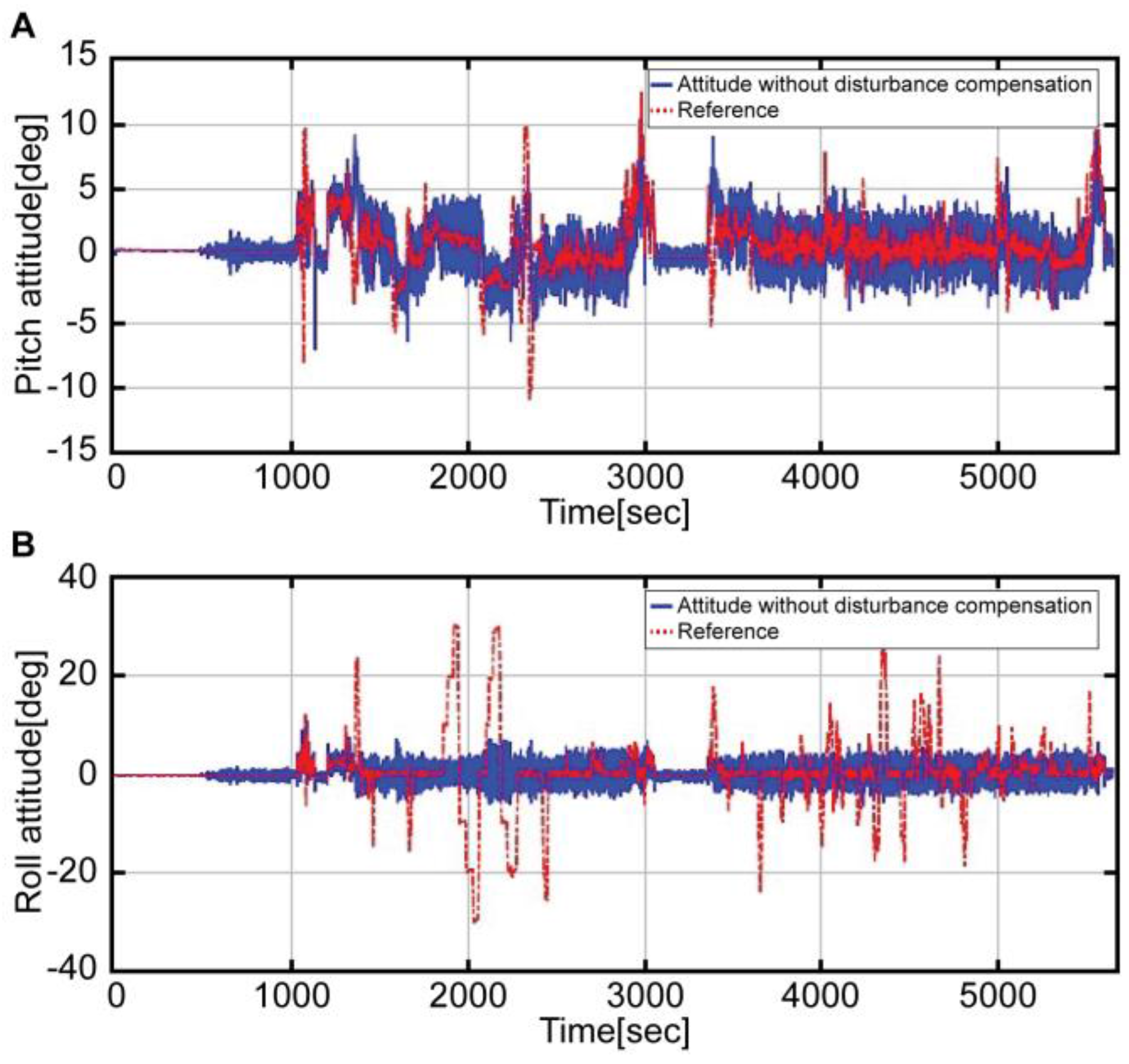 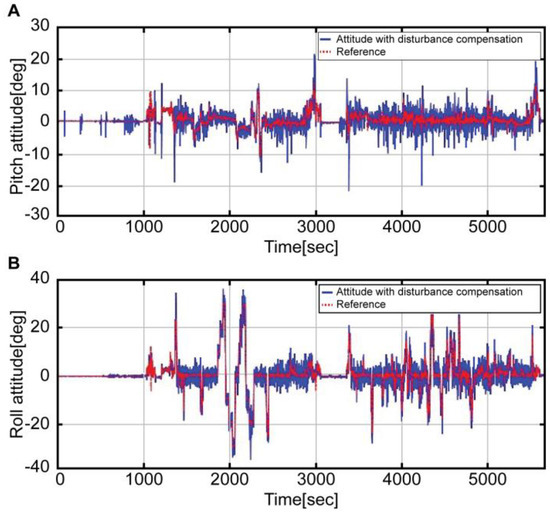 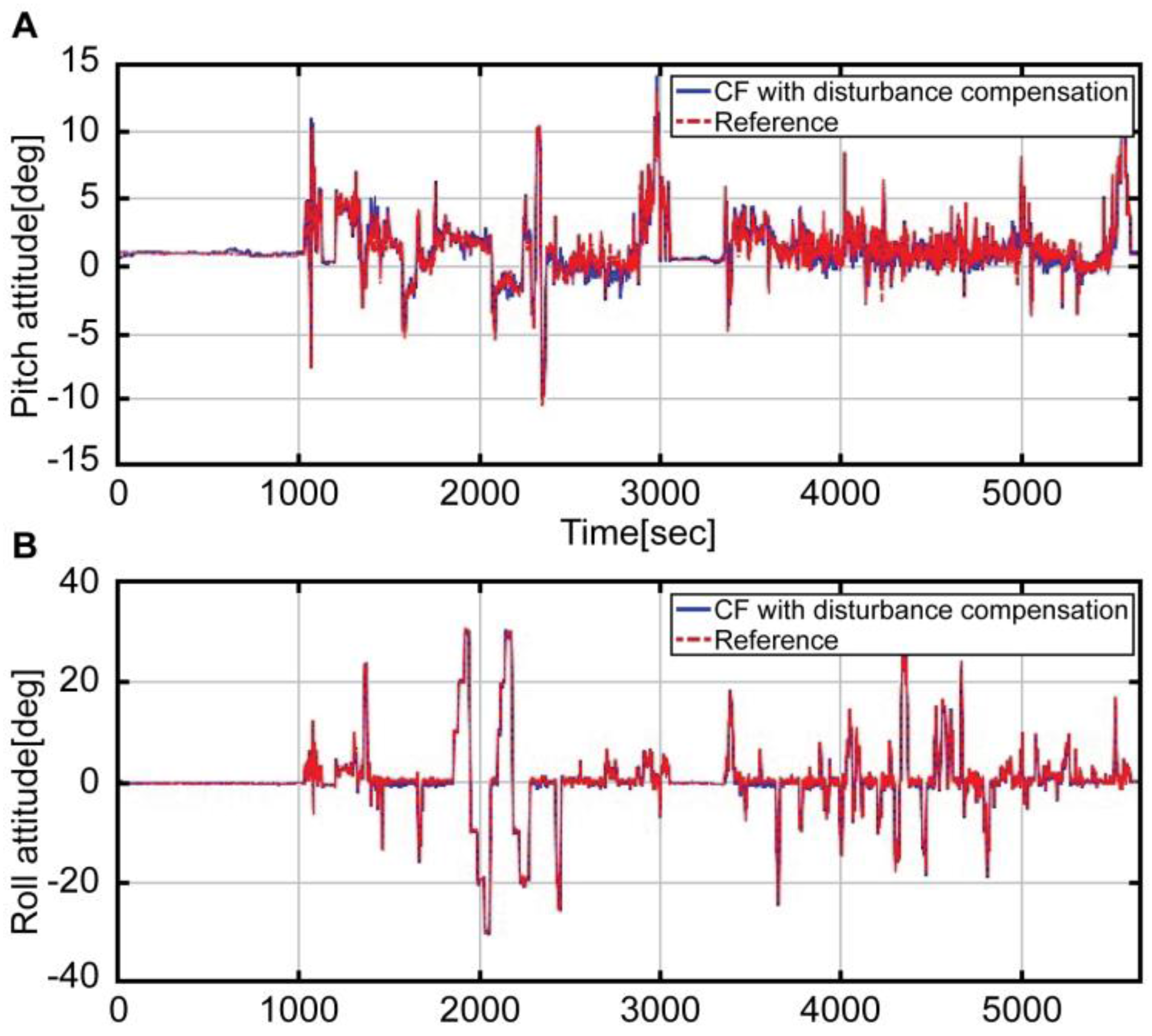 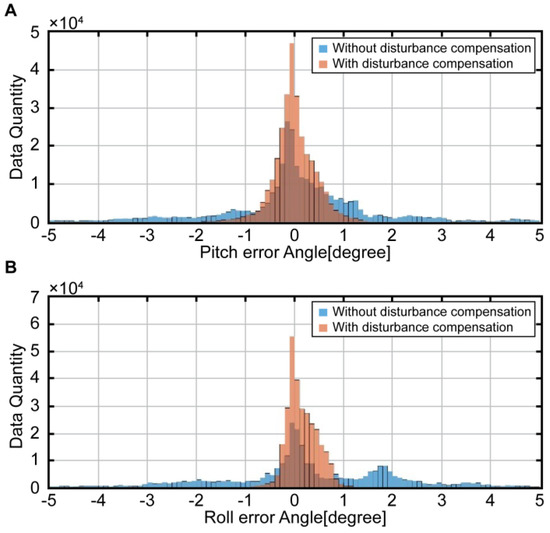 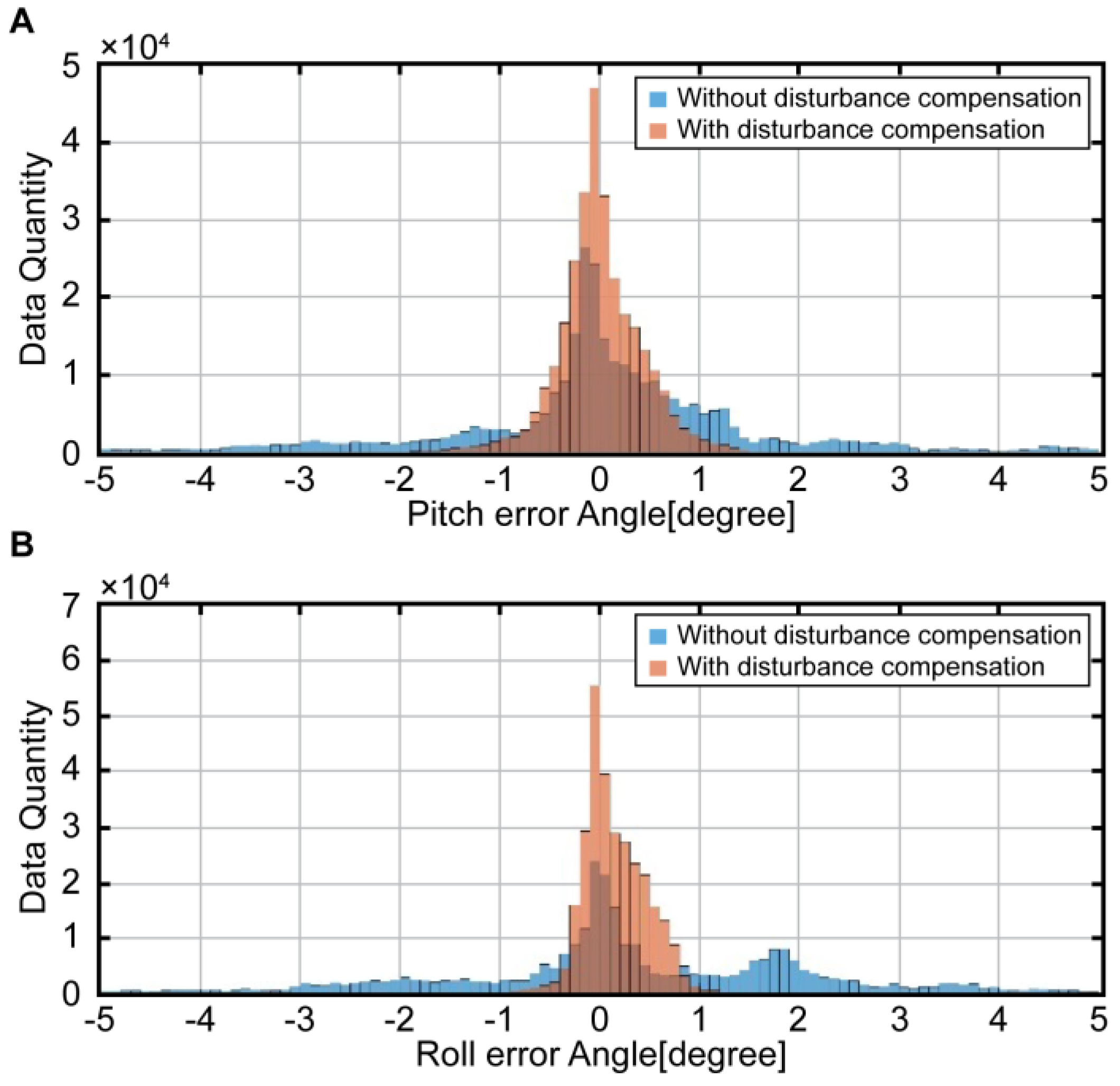