Acceleration is of great importance in motion control for unmanned aerial vehicles (UAVs), especially during the takeoff and landing stages. However, the measured acceleration is inevitably polluted by severe noise. Therefore, a proper noise suppression procedure is required. This paper presents a novel method to reduce the noise in the measured vertical acceleration for a thrust-vectored tail-sitter vertical takeoff and landing (VTOL) UAV. In the new procedure, a Kalman filter is first applied to estimate the UAV mass by using the information in the vertical thrust and measured acceleration. The UAV mass is then used to compute an estimate of UAV vertical acceleration. The estimated acceleration is finally fused with the measured acceleration to obtain the minimum variance estimate of vertical acceleration. By doing this, the new approach incorporates the thrust information into the acceleration estimate. The method is applied to the data measured in a VTOL UAV takeoff experiment. Two other denoising approaches developed by former researchers are also tested for comparison. The results demonstrate that the new method is able to suppress the acceleration noise substantially. It also maintains the real-time performance in the final estimated acceleration, which is not seen in the former denoising approaches. The acceleration treated with the new method can be readily used in the motion control applications for UAVs to achieve improved accuracy. View Full-Text
Keywords: data fusion; noise suppression; Kalman filter; acceleration; VTOL UAV; thrust-vectoring data fusion; noise suppression; Kalman filter; acceleration; VTOL UAV; thrust-vectoring
►▼ Show Figures 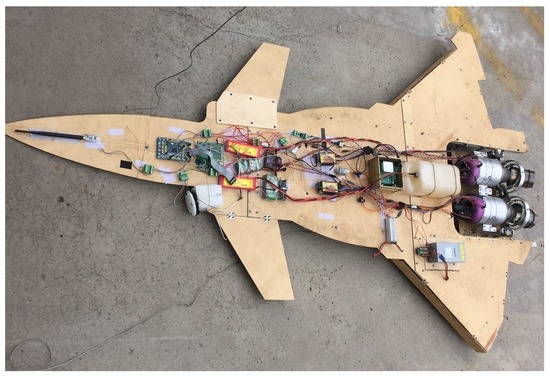