Detection of genetic diversity is important for characterisation of crop plant collections in order to detect the presence of valuable trait variation for use in breeding programs. A collection of faba bean (Vicia faba L.) genotypes was evaluated for intra- and inter-population diversity using a set of 768 genome-wide distributed single nucleotide polymorphism (SNP) markers, of which 657 obtained successful amplification and detected polymorphisms. Gene diversity and polymorphism information content (PIC) values varied between 0.022–0.500 and 0.023–1.00, with averages of 0.363 and 0.287, respectively. The genetic structure of the germplasm collection was analysed and a neighbour-joining (NJ) dendrogram was constructed. The faba bean accessions grouped into two major groups, with several additional smaller sub-groups, predominantly on the basis of geographical origin. These results were further supported by principal co-ordinate analysis (PCoA), deriving two major groupings which were differentiated on the basis of site of origin and pedigree relationships. In general, high levels of heterozygosity were observed, presumably due to the partially allogamous nature of the species. The results will facilitate targeted crossing strategies in future faba bean breeding programs in order to achieve genetic gain. View Full-Text
Keywords: genetic distance; principal co-ordinate analysis; SNP markers genetic distance; principal co-ordinate analysis; SNP markers
►▼ Show Figures 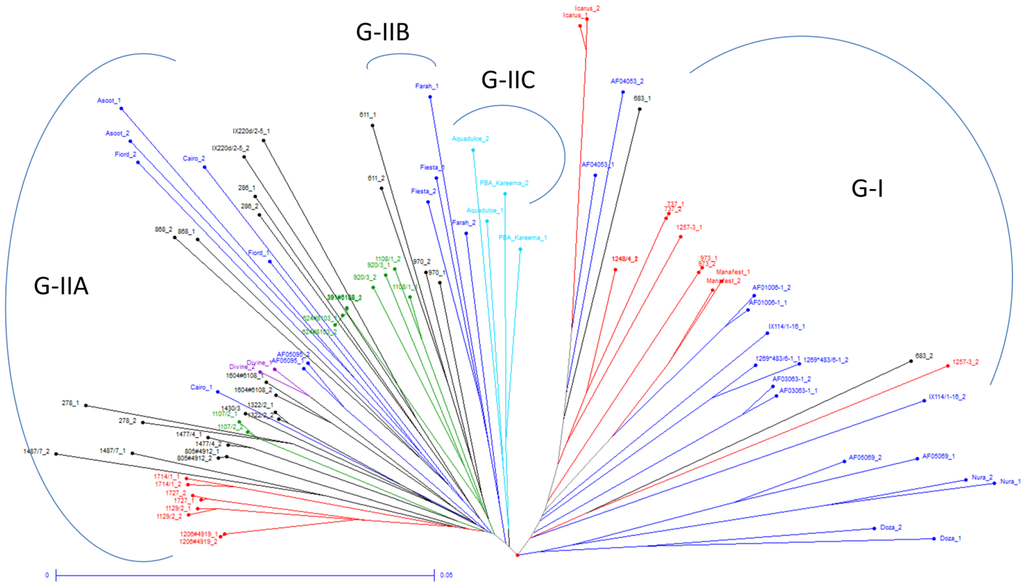