:
Landraces are an agri-food and historical-cultural heritage but are undergoing losses worldwide. Italy is taking action to counteract this problem by following European guidelines. One of the most important measures is the Agrobiodiversity National Register (ANR), but 12 Italian regions currently appear without any landraces and around 80% of the landraces listed are trees, with less detailed data on herbaceous species. The aim of this study is to investigate the situation for Italian herbaceous landraces preserved on farms (in situ) by merging and analyzing data contained in the main databases on plant agrobiodiversity in Italy. Data were georeferenced, organized by botanic families and Italian regions, and analyzed by GIS and R. A total of 1615 herbaceous landraces were found (versus the 416 recorded in the ANR). Poaceae, Fabaceae, and Solanaceae together comprise 70% of all herbaceous landraces and are mostly preserved/grown in areas between 150 and 800 m a.s.l. Some hilly and sub-mountain areas of the Apennines and the Alps are hotspots of herbaceous landraces due to anthropic and environmental factors. The results of this research will be useful to enrich the ANR and trigger actions of characterization, conservation, and promotion of these plant resources.
Keywords:
agrobiodiversity; crops; herbaceous plants; in situ conservation; plant diversity; plant genetic resources; traditional cultivars 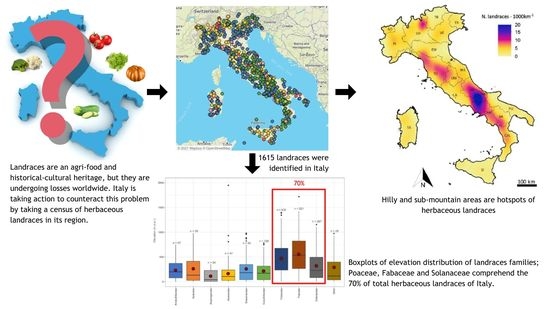 The herbaceous landraces inventory was elaborated following the considerations of Maxted et al. in [40]. In detail, for the purposes of creating a complete and updated inventory of herbaceous landraces, the following inventories were considered:
The above-mentioned inventories and data sources were merged, eliminating overlapping data, and considering only herbaceous plants. Where possible, landrace data were checked so that they corresponded to the characteristics stated by [2]. To understand if the landraces were used for crop production or just preserved/grown by custodian farmers, a web survey regarding cultivation in agricultural holdings was performed for landraces for which no data were present in the databases analyzed.
Data were organized in Excel sheets with different fields: common name/names of the landraces, species/genus, family, elevation, latitude, longitude, municipality, region, cultivator/conservator (farmer/hobbyist and/or farm). Data were organized by botanic families and regions and georeferenced. Geographic coordinates (latitude and longitude) and elevation were acquired through Google Earth and/or Google Maps from the address of the private grower/association/municipality or farm of the specific landrace obtained from the data sources mentioned. Landraces were sorted according to multidimensional scaling (MDS) analysis in order to highlight the main geographical variables that differentiated the samples. MDS was performed using Euclidean distance and considering the latitude, longitude and elevation of each landrace. MDS was performed using the “vegan” package of R 3.5.2 software [50].
Distribution maps of the landraces were created by ArcGIS 10 software (®Esri, Redlands, CA, USA). The same software was used to identify hotspots by the kernel density method [51,52] using the spatial analysis tool. The elevation feature was displayed through boxplots using R software [50]. Boxplots were created by splitting the landraces into families and, for the most numerous (more than 200 landraces), a focus on the main genus and/or species was realized.
The scientific name of each taxon is in accordance with the Portal of Flora of Italy 2020.1 (http://dryades.units.it/floritaly/index.php).

This research contributed to knowledge on herbaceous landraces cultivated (preserved in situ) in Italy by merging the most important databases. The study allowed the creation of an updated database of 1615 herbaceous landrace varieties, meaning that the total number of Italian herbaceous landraces identified could increase by about 290%. Their distribution throughout Italy was analyzed (considering single regions), highlighting interesting regional differences and locating herbaceous landrace hotspots, situated mainly in the hilly and sub-mountain marginal areas of Italy.
Parallels can be drawn between the Italian situation and the hilly, sub-mountain, and, in general, marginal areas (such as small islands and archipelagos) that can be considered hotspots of agrobiodiversity and require scientific attention for the protection of biodiversity and agrobiodiversity. Data on the latter, in particular horticultural and herbaceous agrobiodiversity, particularly at risk due to its characteristics, need merging and analyzing as inventories as the first step towards the study, conservation, and promotion of agrobiodiversity.
It is to be hoped that the dataset of this research, currently the most comprehensive and updated available in Italy, will be useful to all stakeholders (civil society, farmers, and governance as well as researchers) as it provides information on Italian herbaceous landraces and can be a starting point to enrich the Agrobiodiversity National Register and trigger actions of characterization, protection, and promotion of these resources. For these purposes, the data gathered during the research work will be forwarded to the Department for Regional Affairs and Autonomies (DARA) of the Italian Presidency of the Council of Ministers. Furthermore, an online interactive map reporting the main information regarding each landrace will be available open source at the following link: https://www.unimontagna.it/servizi/mappatura-agrobiodiversita-vegetale/. It is also to be hoped that, in the future, the database will be supplemented with maintainer details, cultivation, usage, and specific threats and that information will be made available via a web-enabled database and periodically updated to monitor changes in on-farm maintained landrace diversity following the recommendations of [40].

This research was supported by the Department for Regional Affairs and Autonomies (DARA) of the Italian Presidency of the Council of Ministers (DARA-CRC Ge.S.Di.Mont. agreement), FISR-MIUR “Italian Mountain Lab” project, and by the “Montagne: Living Labs di innovazione per la transizione ecologica e digitale” project.

The data presented in this study are openly available here: https://www.unimontagna.it/servizi/mappatura-agrobiodiversita-vegetale/.

We would like to thank Giulia Ceciliani for help provided in collecting and analyzing data, Vincenzo Montalbano and Maurizio D’Aristotile of MiPAAF for their collaboration and information relating to the Agrobiodiversity National Register, Francesco Tufarelli of DARA for supporting this research, and Justine Crellin for the English editing. 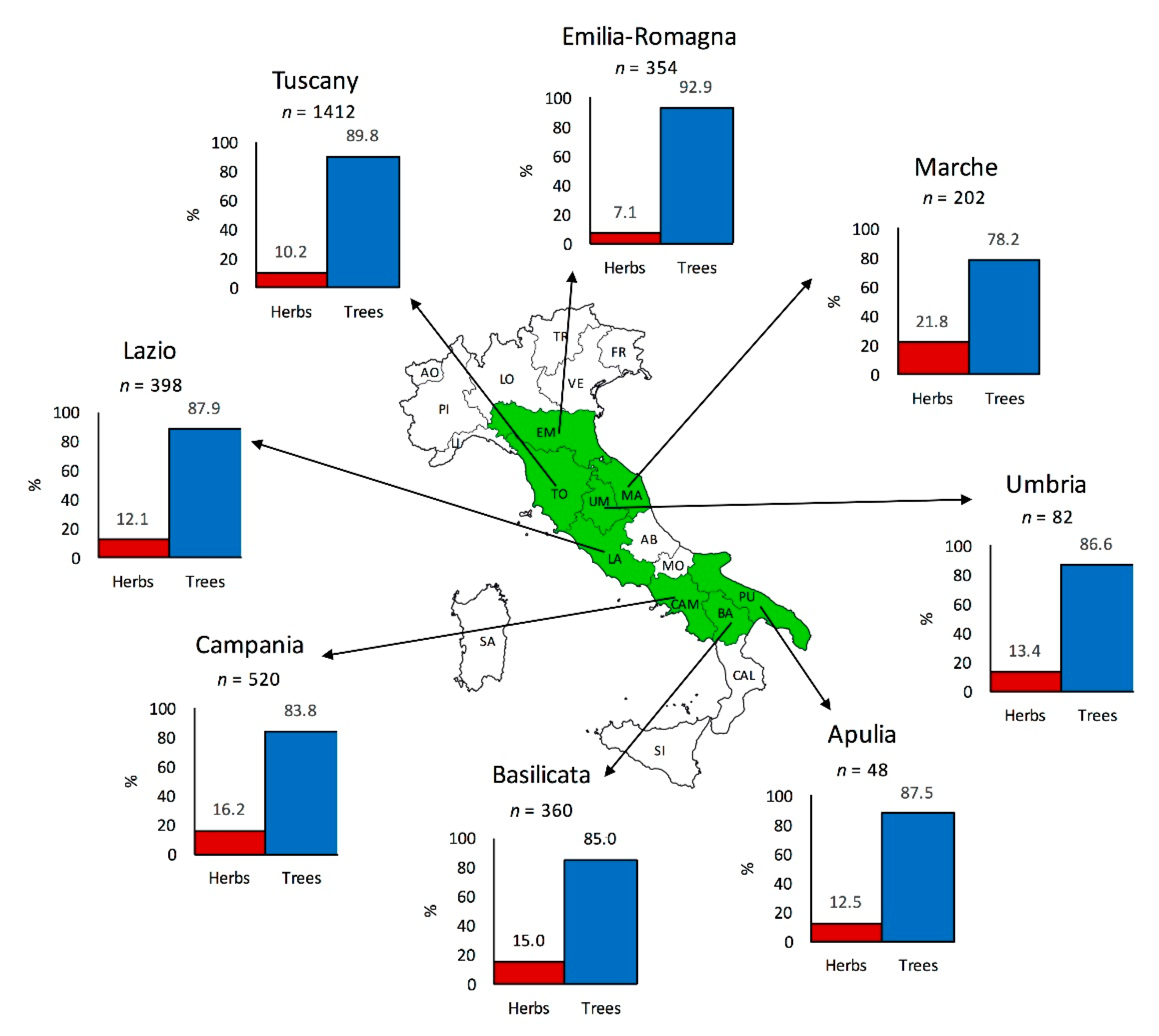 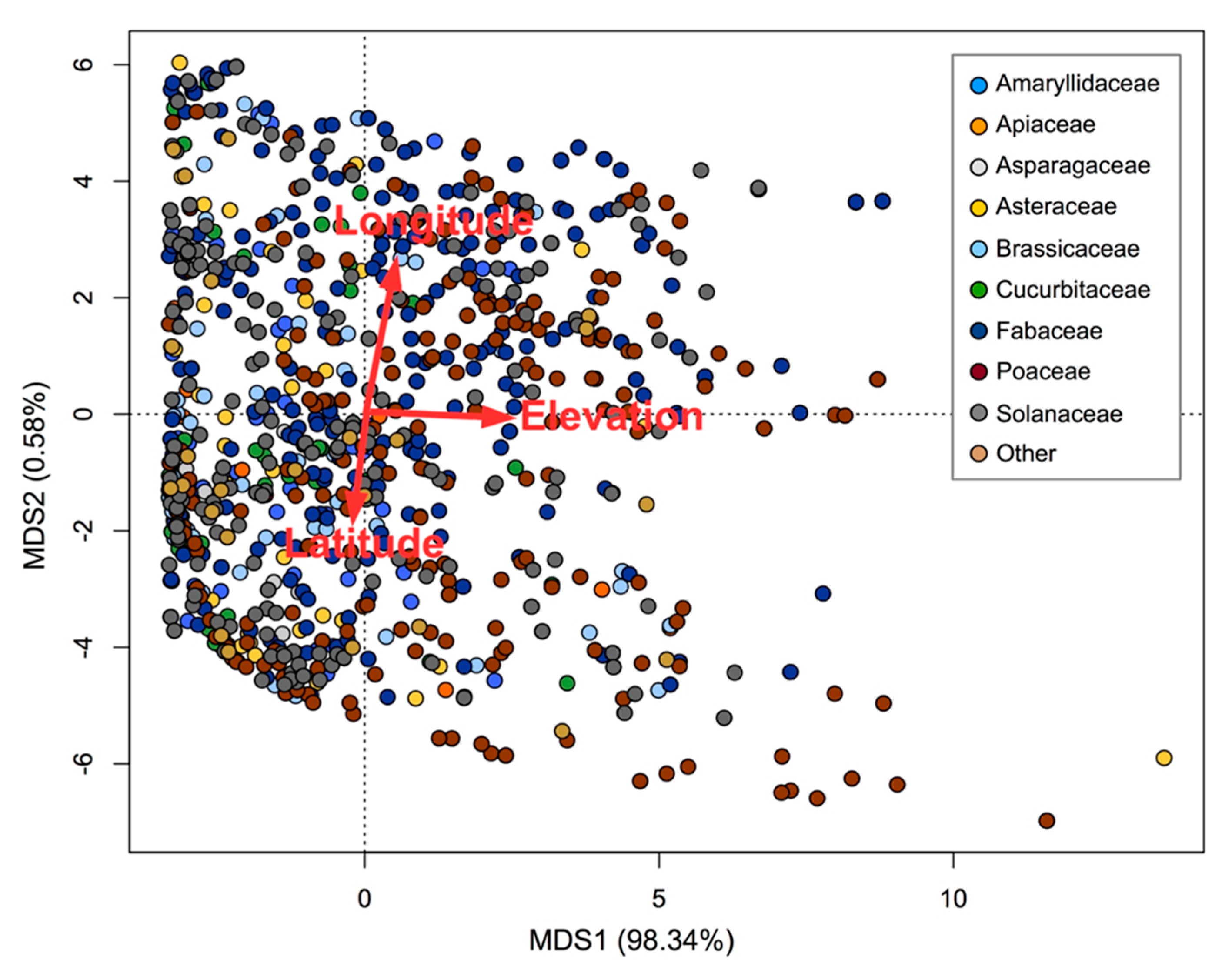