Threat assessment is important to prioritize species conservation projects and planning. The taxonomic resolution regarding the status of the “Dryophytes immaculatus group” and the description of a new species in the Republic of Korea resulted in a shift in ranges and population sizes. Thus, reviewing the IUCN Red List status of the three species from the group: D. immaculatus, D. suweonensis and D. flaviventris and recommending an update is needed. While the three species have similar ecological requirements and are distributed around the Yellow Sea, they are under contrasting anthropological pressure and threats. Here, based on the literature available, I have applied all IUCN Red List criterion and tested the fit of each species in each criteria to recommend listing under the appropriate threat level. This resulted in the recommendation of the following categories: Near Threatened for D. immaculatus, Endangered following the criteria C2a(i)b for D. suweonensis and Critically Endangered following the criteria E for D. flaviventris. All three species are declining, mostly because of landscape changes as a result of human activities, but the differences in range, population dynamics and already extirpated subpopulations result in different threat levels for each species. Dryophytes flaviventris is under the highest threat category mostly because of its limited range segregated into two subpopulations; and several known extirpated subpopulations. Immediate actions for the conservation of this species are required. Dryophytes suweonensis is present in both the Republic of Korea and the Democratic Republic of Korea (DPR Korea) and is under lower ecological pressure in DPR Korea. Dryophytes immaculatus is present in the People’s Republic of China, over a very large range despite a marked decline. I recommend joint efforts for the conservation of these species. View Full-Text
Keywords: Dryophytes immaculatus; Dryophytes suweonensis; Dryophytes flaviventris; Yellow Sea; North East Asia; threat; amphibian; recommendation IUCN Red List Dryophytes immaculatus; Dryophytes suweonensis; Dryophytes flaviventris; Yellow Sea; North East Asia; threat; amphibian; recommendation IUCN Red List
►▼ Show Figures 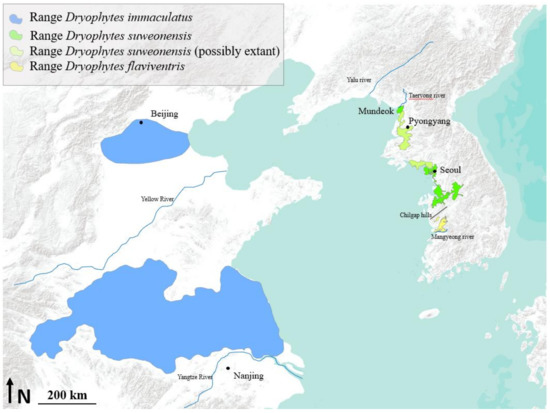