Glassfrogs (family: Centrolenidae) represent a fantastic radiation (~150 described species) of Neotropical anurans that originated in South America and dispersed into Central America. In this study, we review the systematics of Ecuadorian glassfrogs, providing species accounts of all 60 species, including three new species described herein. For all Ecuadorian species, we provide new information on the evolution, morphology, biology, conservation, and distribution. We present a new molecular phylogeny for Centrolenidae and address cryptic diversity within the family. We employ a candidate species system and designate 24 putative new species that require further study to determine their species status. We find that, in some cases, currently recognized species lack justification; specifically, we place Centrolene gemmata and Centrolene scirtetes under the synonymy of Centrolene lynchi; C. guanacarum and C. bacata under the synonymy of Centrolene sanchezi; Cochranella phryxa under the synonymy of Cochranella resplendens; and Hyalinobatrachium ruedai under the synonymy of Hyalinobatrachium munozorum. We also find that diversification patterns are mostly congruent with allopatric speciation, facilitated by barriers to gene flow (e.g., valleys, mountains, linearity of the Andes), and that niche conservatism is a dominant feature in the family. Conservation threats are diverse, but habitat destruction and climate change are of particular concern. The most imperiled glassfrogs in Ecuador are Centrolene buckleyi, C. charapita, C. geckoidea, C. medemi, C. pipilata, Cochranella mache, Nymphargus balionotus, N. manduriacu, N. megacheirus, and N. sucre, all of which are considered Critically Endangered. Lastly, we identify priority areas for glassfrog conservation in Ecuador. View Full-Text
Keywords: anura; biogeography; centrolenidae; systematics; taxonomy anura; biogeography; centrolenidae; systematics; taxonomy
►▼ Show Figures 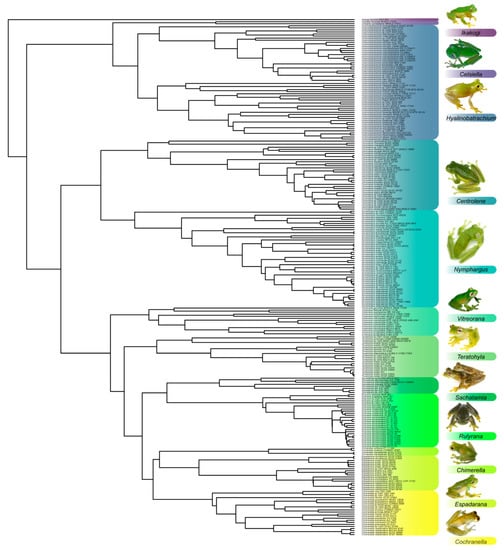