Do Salamanders Limit the Abundance of Groundwater Invertebrates in Subterranean Habitats?
Previous Article in Special Issue

Evidence for Wide Dispersal in a Stem Galliform Clade from a New Small-Sized Middle Eocene Pangalliform (Aves: Paraortygidae) from the Uinta Basin of Utah (USA)

The First Fossil Owl (Aves, Strigiformes) From the Paleogene of Africa

The relatively extensive fossil record of owls (Aves, Strigiformes) in North America and Europe stands in stark contrast to the paucity of fossil strigiformes from Africa. The first occurrence of a fossil owl from the Paleogene of Africa extends the fossil record of this clade on that continent by as much as 25 million years, and confirms the presence of large-sized owls in Oligocene continental faunas. The new fossil is tentatively referred to the Selenornithinae, a clade of large owls previously restricted to Europe. This new fossil owl was likely similar in size to the extant Eagle Owls of the genus Bubo, and suggests that the niche of large, volant, terrestrial avian predator, although relatively rare throughout avian evolutionary history, may be an ecological role that was more common among extinct owls than previously recognized. View Full-Text
Keywords: Egypt; Fayum Depression; Jebel Qatrani Formation; Oligocene; Selenornithinae Egypt; Fayum Depression; Jebel Qatrani Formation; Oligocene; Selenornithinae
►▼ Show Figures 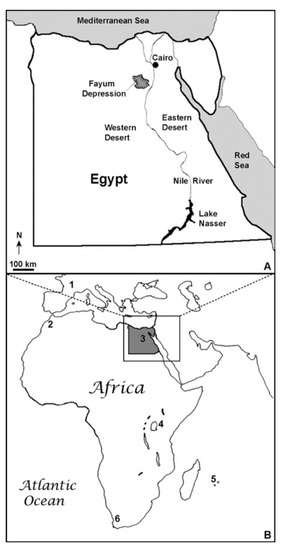