Critical Thermal Limits Do Not Vary between Wild-caught and Captive-bred Tadpoles of Agalychnis spurrelli (Anura: Hylidae)
Next Article in Special Issue

The family Turbanellidae includes Paraturbanella and five other genera. Despite the fact that the monophyly of these genera were not satisfactorily tested, species belonging to the genus Paraturbanella are distinguished from turbanellids by sharing a peculiar group of tubes on the ventrolateral side of the anterior pharyngeal region known as “dohrni” tubes. In this study, Paraturbanella tricaudata species nova (sp. nov.) from the intertidal zone of a sandy beach in Trindade (Rio de Janeiro State) and the sublittoral sand of Prumirim Island (São Paulo State), Brazil, is described. The new species can be distinguished from all other Paraturbanella species by the presence of three caudal cones (one medial and two laterals to it) and peculiar arrangement of the male system. This is the first description of a Paraturbanella species from Brazil and the third registered from the Southern Hemisphere (as opposed to 19 species in the Northern Hemisphere); thus, knowledge of marine gastrotrichs biodiversity in this region is far from satisfactory.
Keywords: gastrotricha; meiofauna; biodiversity; taxonomy; South America; South Hemisphere; nuclear genes gastrotricha; meiofauna; biodiversity; taxonomy; South America; South Hemisphere; nuclear genes

Information about the description of the new species is mainly taken from specimens found in samples collected by hand from the shallow intertidal area of Praia do Cachadaço, Trindade–Paraty (23°21′15.8″ S, 44°43′41.5″ W), Rio de Janeiro State, Brazil, in October 2017. The sandy sediment was filtered (0.40 µm mesh), and extraction of animals from the sediment was carried out by anaesthetization with MgCl2. The supernatant was poured into a Petri dish, and with a micro-pipette it was possible to separate the gastrotrichs into embryo dishes. Specimens were observed alive with a stereomicroscope ZEISS Stemi 2000. Additional information comes from specimens collected and documented by one of us (M. Antonio Todaro) in 2002 and 2003 [34,35]; the sampling sites and distribution of Paraturbanella species along the Brazilian coast were plotted on the map, elaborated using ArcGis [36] (Figure 1), and made available at https://www.arcgis.com/home/webmap/viewer.html?webmap=fafb1d0942b4483a99ddf828fc24039a.

The gastrotrichs of interest were picked out with a micropipette, mounted on glass slides, and studied using Zeiss Axio Imager M2 plus Differential Interference Contrast optics, with Zen Lite Zeiss software (Zen Blue) and an Axiocam 105 color camera. The observation was taken using a slow-moving living specimen and the measures followed convention [37], according to the position of morphological characteristics along the body. The software used to measure the structures of specimens was Image J.

The specimens were fixed in glutaraldehyde 2.5%, rinsed with cacodylate buffer 0.1 M, dehydrated in a graded ethanol series, and critically point dried with CO2. Stubs were coated with gold and analyzed using a scanning electron microscope JSM 5800 LV, with 10 kV voltage.

The particle size analyses were made following the sediment screening method using different opening meshes [38]. A fraction of the sample was separated and oven dried at 60 °C for 24 h. The dried material was sieved in different Granutest sieves with progressively smaller openings, and the fraction retained in each sieve was weighed and noted. Through these values, sediment fractions were weighed and granulometric characters (median, standard deviation, skewness and kurtosis) were calculated using GRANPLOTS with line segments [39].

All the formal species of the family Turbanellidae from which sequences of 18S rDNA and/or 28S rDNA were available in GenBank were included as the ingroup in the present analysis (Paraturbanella: 5 species; Turbanella: 5 species). The species and respective GenBank accession numbers are listed in Table 1. The outgroup was composed of two Megadasys species and four Mesodasys species due to the close phylogenetic position of these taxa with the taxon Turbanellidae [4,40]. Each gene dataset was aligned separately using BioEdit Sequence Alignment Editor and Mafft v.7.402 (L-INS-I approach) [41].
Parsimony analysis was performed using a heuristic search with equally weighted characters that was available using TNT software [42]. Most parsimonious trees were searched by the heuristic method, with 1000 replications, holding 1,000,000 trees per search (command line: mult = replications 1000 hold 100,000) and collapsing the tree after the search.
For maximum likelihood analysis, GTRCAT model was chosen and RAxML [43] was run with a with 1000 bootstrap replicates.

3.1.1. Variability and Remarks on General Morphology

Seven additional adult measured specimens showed six TbP per side and three caudal cones, meaning that these traits are rather constant within and among the investigated populations. On the other hand, the number of TbA is slightly variable but not related to the size of the animal; in fact, one of the specimens attaining a maximum length of 480 µm (Figure 5) possessed only five TbA per side while another attaining 332 µm in total length had six TbA.

Currently, there are 23 described species belonging to the genus Paraturbanella [6,17,33]. The new species bares closest resemblance to five species: P. africana Todaro, Dal Zotto, Bownes & Perissinotto, 2017 [17]; P. teissieri Swedmark, 1954 [19]; P. sanjuanensis Hummon, 2010 [23]; P. solitaria Todaro, 1995 [31]; and P. xaymacana Dal Zotto, Leasi & Todaro, 2018 [33], showing similar body and head shape, as well as peribuccal swelling [33].
The species Paraturbanella tricaudata sp. nov. is considered new because it has three caudal cones, while the others have just one cone; moreover, the arrangement of the reproductive system, and in particular the location of the male pore, in combination with the extension and anatomical positioning of the testes is unique among congeneric species (two sperm ducts at U60 turning anteriorly and fusing in a mid-ventral pore).

The final alignment of the combined dataset yielded 3525 positions (1693 in 18S rDNA and 1832 in 28S rDNA). The parsimony analysis yields only one most-parsimonious tree with 4626 steps (Figure 7).
Parsimony and Maximum Likelihood analyses yielded congruent topologies. In both analyses the phylogenies showed that the family Turbanellidae (both supported by very high bootstrap value - 100) and the genera Turbanella and Paraturbanella were monophyletic (Parsimony: Turbanella with good bootstrap values - 85; Maximum Likelihood: both genera supported by very high bootstrap value, respectively 100 and 99) and sister groups.
The phylogenetic position of Paraturbanella tricaudata sp. nov. was not stable in both analyses. The new species appeared as the sister-group of Paraturbanella sp. and both species were closely related with P. pallida in Maximum Parsimony analysis (Figure 7). However, Paraturbanella tricaudata sp. nov. was sister-group of P. pallida and both species were closely related with Paraturbanella sp. in Maximum Likelihood analysis (Figure 8).

The majority of marine gastrotrich sampling sites are in the Northern Hemisphere [51], while in tropical countries the investigated areas are very scattered [14,16,17,30,52]. The Brazilian coast is poorly sampled, although it shows a high diversity of marine gastrotrichs, according to current literature [5,51]. In terms of knowledge of Turbanellidae diversity from Brazil, there are at least four candidate species to be formally described (one Turbanella species and three Paraturbanella species) from the north coast of São Paulo State [34,35].
The Brazilian coast represents a potentially important area for the discovery of new species, and it is worth noting that this region is of particular interest in the study of marine meiofauna and the diversity of Gastrotricha, as recorded in previous studies [2,34,35,51,52,53,54]. We emphasize the importance of investigating new geographic areas in order to improve our understanding of morphological diversity and the species richness of gastrotrich species.
Finally, the inclusion of new sequences of data concerning Paraturbanella tricaudata sp. nov. and the use of distinct phylogenetic approaches did not change the scenario found by Todaro et al. [44], Kolicka et al. [13], and Garraffoni et al. [4]. However, it is important to highlight that the low number of Turbanellidae species sequenced (from two of the six genera) may result in misleading the phylogenetic relationships within this clade.

The authors would like to thank K.R. Seger for help with molecular analysis. A.C.Z Amaral for providing the nested column of sieves and T.A. Quintão for grain size data analysis. We are also grateful to three anonymous reviewers for their constructive criticism that greatly improving the first version of the manuscript. 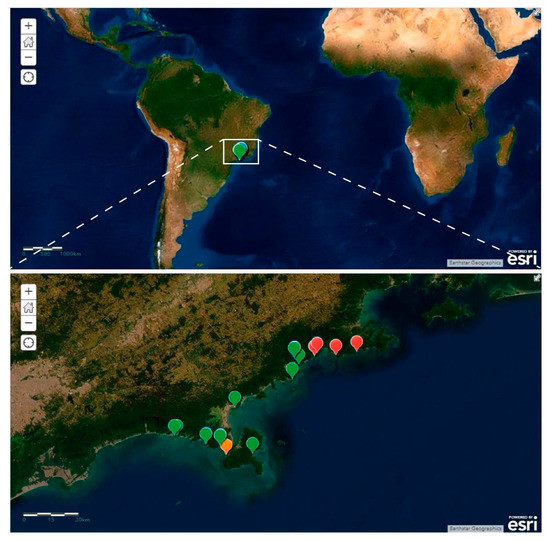 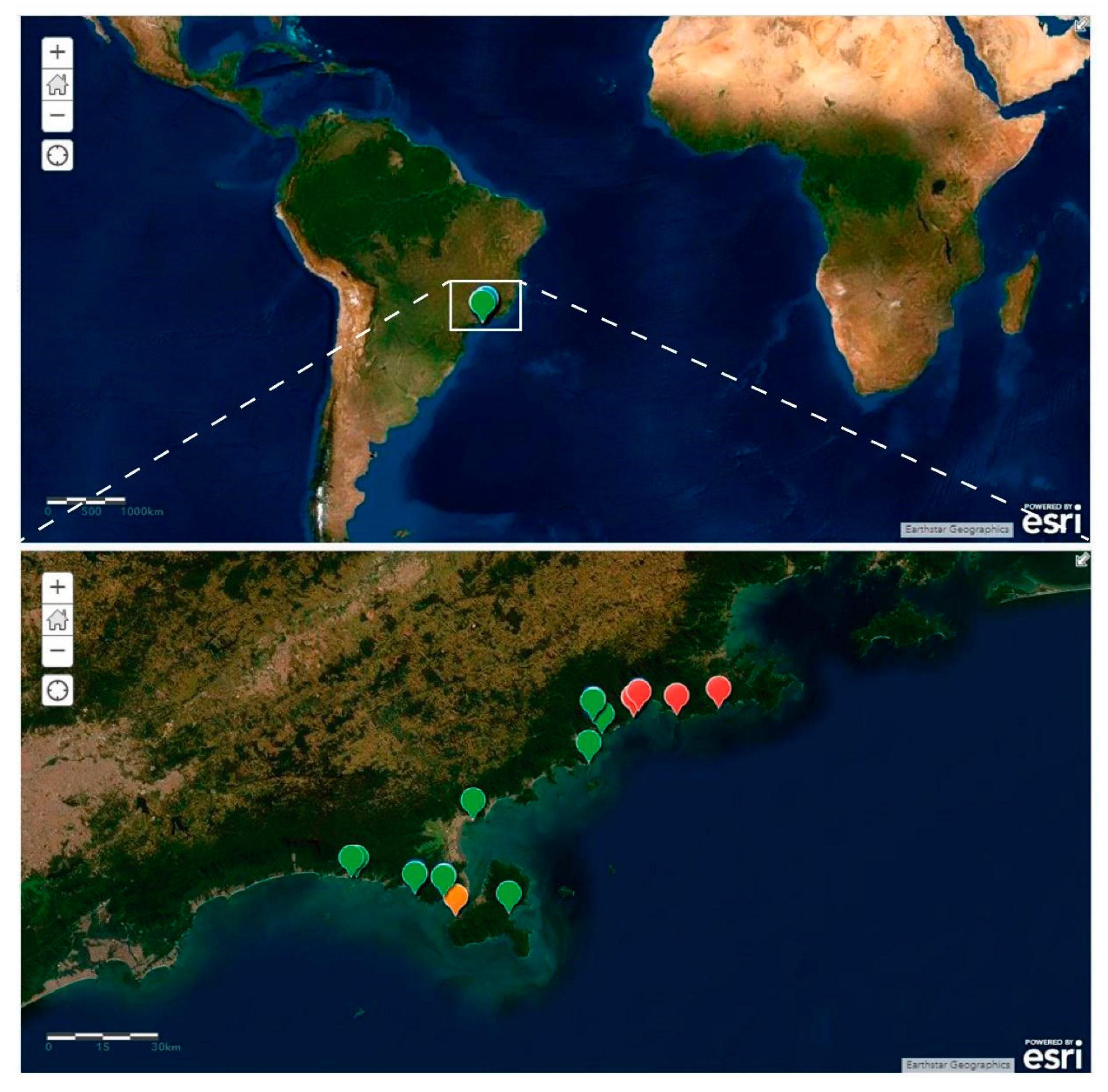 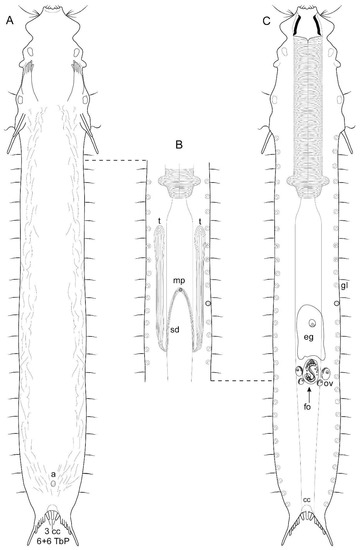 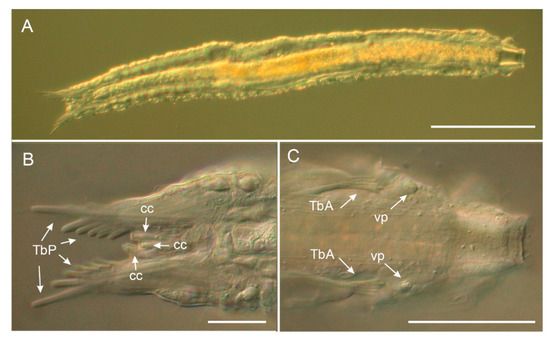 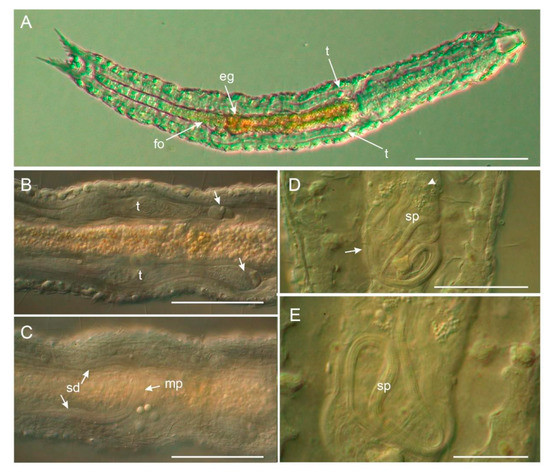 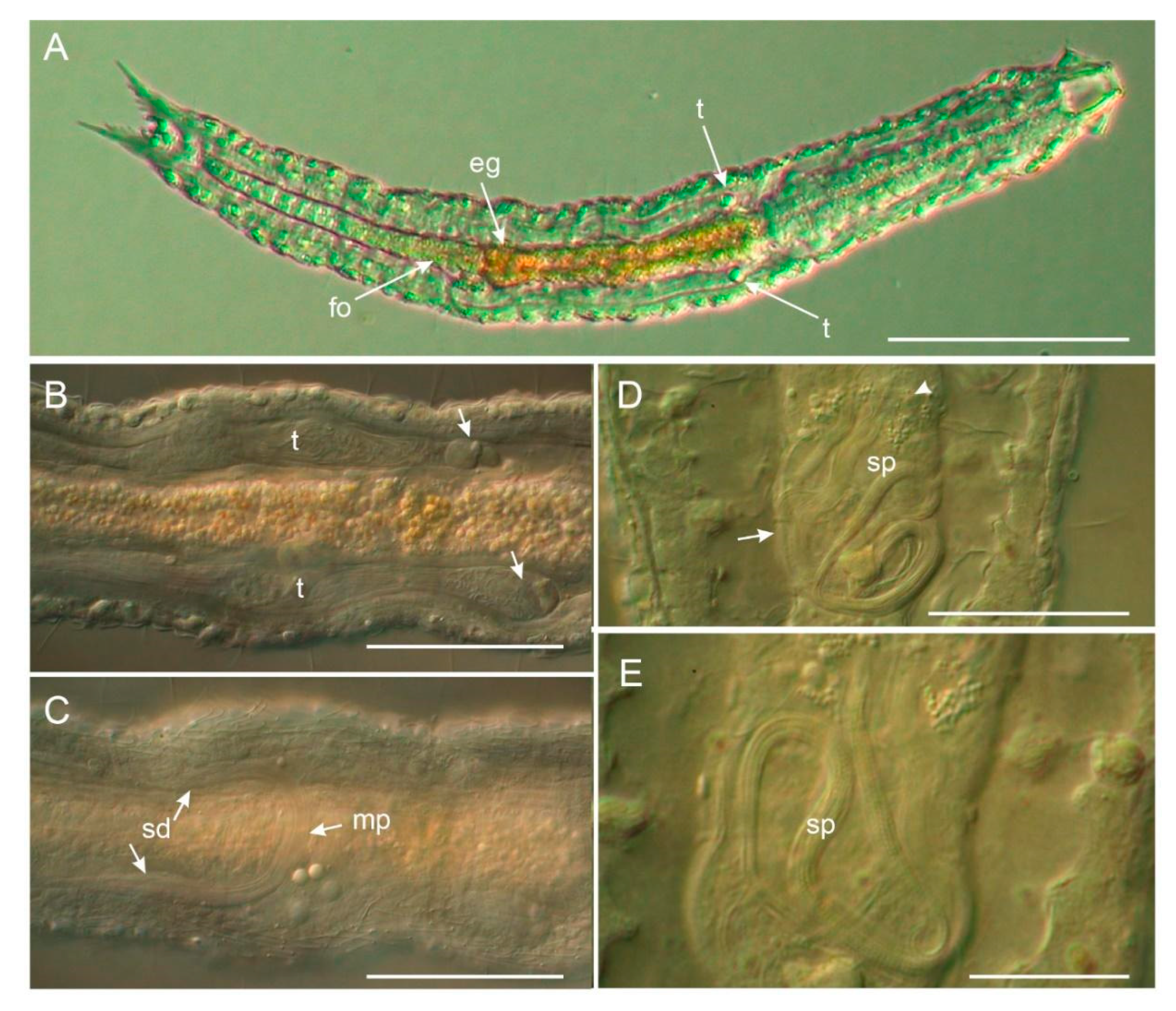 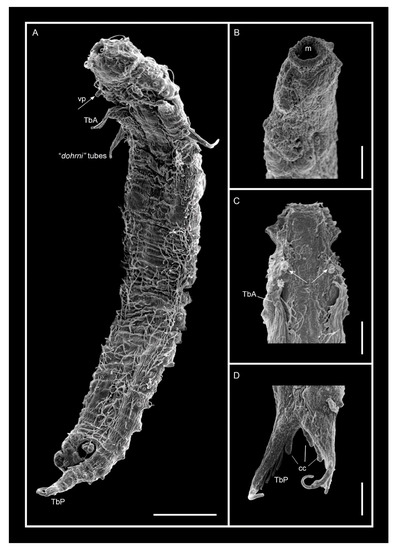 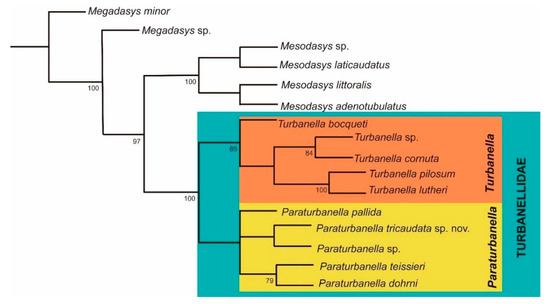 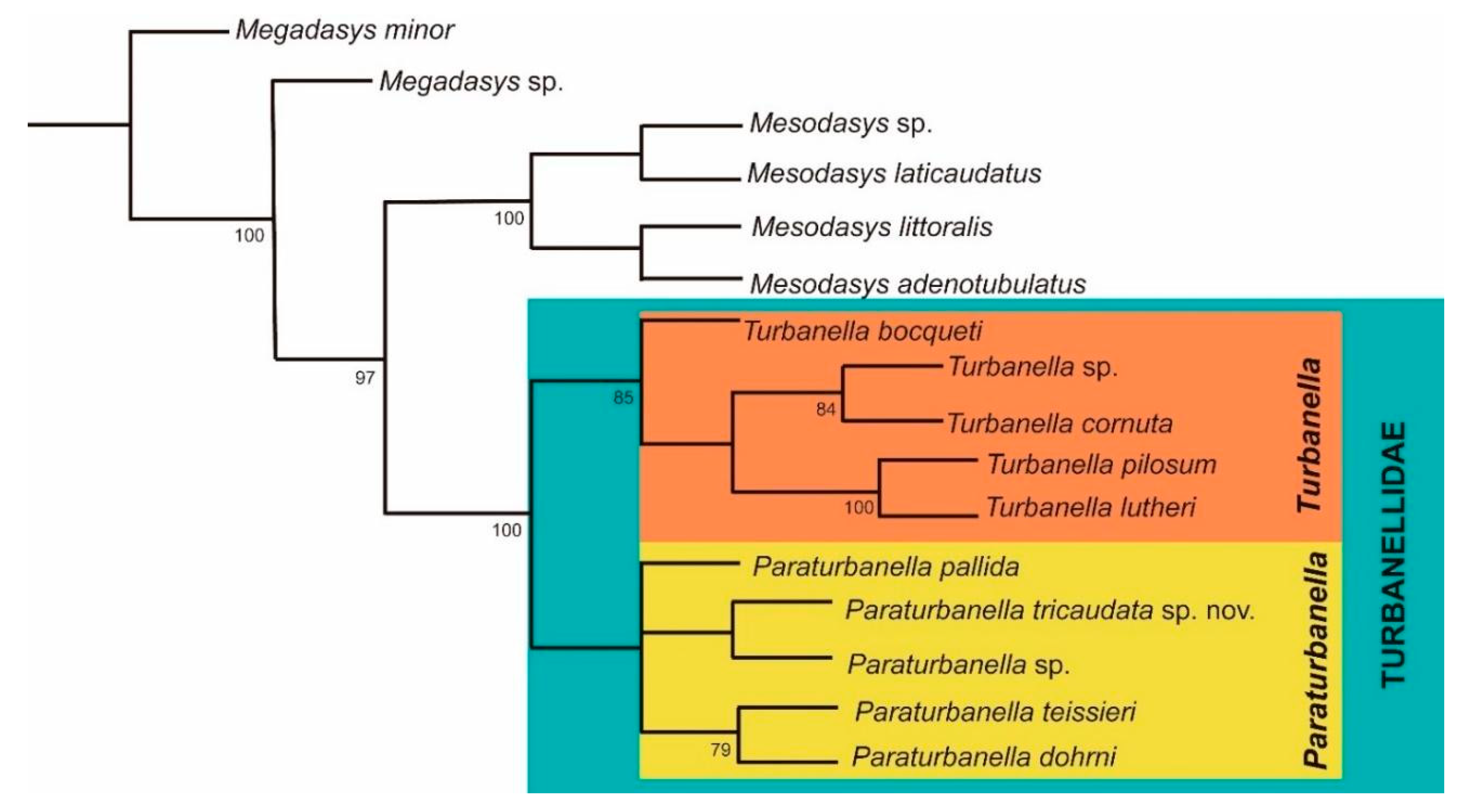 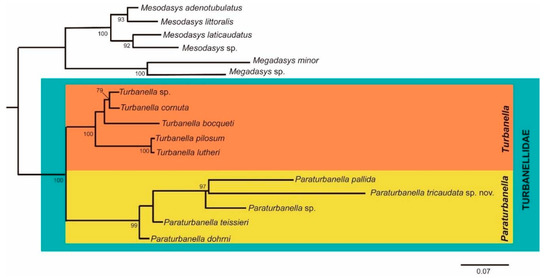