Filling the Gap and Improving Conservation: How IUCN Red Lists and Historical Scientific Data Can Shed More Light on Threatened Sharks in the Italian Seas
Previous Article in Journal

Evaluation of Metabarcoding Primers for Analysis of Soil Nematode Communities

While recent advances in next-generation sequencing technologies have accelerated research in microbial ecology, the application of high throughput approaches to study the ecology of nematodes remains unresolved due to several issues, e.g., whether to include an initial nematode extraction step or not, the lack of consensus on the best performing primer combination, and the absence of a curated nematode reference database. The objective of this method development study was to compare different primer sets to identify the most suitable primer set for the metabarcoding of nematodes without initial nematode extraction. We tested four primer sets for amplicon sequencing: JB3/JB5 (mitochondrial, I3-M11 partition of COI gene), SSU_04F/SSU_22R (18S rRNA, V1-V2 regions), and Nemf/18Sr2b (18S rRNA, V6-V8 regions) from earlier studies, as well as MMSF/MMSR (18S rRNA, V4-V5 regions), a newly developed primer set. We used DNA from 22 nematode taxa, 10 mock communities, 20 soil samples, 4 root samples, and one bulk soil. We amplified the target regions from the DNA samples with the four different primer combinations and sequenced the amplicons on an Illumina MiSeq sequencing platform. We found that the Nemf/18Sr2b primer set was superior for detecting soil nematodes compared to the other primer sets based on our sequencing results and on the annotation of our sequence reads at the genus and species ranks. This primer set generated 74% reads of Nematoda origin in the soil samples. Additionally, this primer set did well with the mock communities, detecting all the included specimens. It also worked better in the root samples than the other primer set that was tested. Therefore, we suggest that the Nemf/18Sr2b primer set could be used to study rhizosphere soil and root associated nematodes, and this can be done without an initial nematode extraction step. View Full-Text
Keywords: nematode diversity; soil; rhizosphere; environmental; NGS nematode diversity; soil; rhizosphere; environmental; NGS
►▼ Show Figures 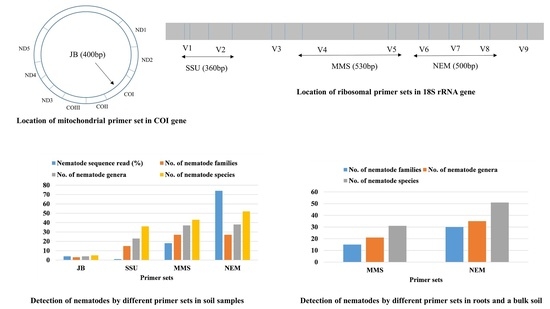