Oenothera drummondii Hook. (Onagraceae) has life-history traits that make it an invasive species. Native populations are distributed along the coastal dunes from North Carolina in the United States to Tabasco in the Gulf of Mexico. It has been reported as an invasive species in Spain, Israel, and China, where this species can successfully colonize and dominate if the environmental conditions are appropriate. In South Africa, Australia, New Zealand, and France, it is reported to be naturalized. In this study, 28 microsatellite markers developed for other Oenothera species were evaluated for cross-amplification in O. drummondii. Nine primers showed consistent amplification and were polymorphic. Polymorphism was assessed in three populations from both native and invaded areas. Results indicated generalized low genetic variability. Three loci showed significant deviations from the Hardy Weinberg equilibrium, associated with null alleles’ presence. The observed heterozygosity and inbreeding coefficient reflected a generalized excess of homozygotes, particularly in the invaded population “El Dique”, likely due to allele fixation. High genetic differentiation was found between the three populations. These results highlight the accuracy of these markers for future population genetic studies in O. drummondii. View Full-Text
Keywords: genetic diversity; genetic structure; invasive plant; cross-amplification; coastal dunes; microsatellite loci; population genetics genetic diversity; genetic structure; invasive plant; cross-amplification; coastal dunes; microsatellite loci; population genetics
►▼ Show Figures 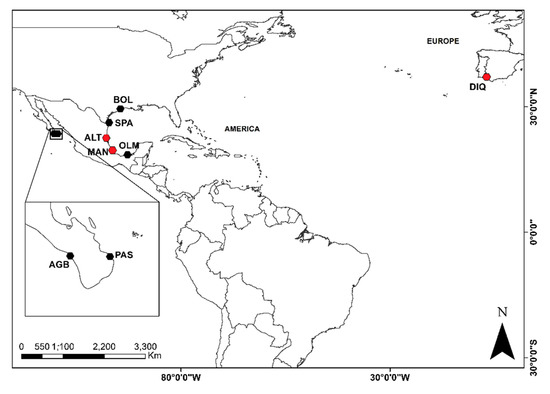