Conservation Status and Challenges of the Atlantic Forest Birds of Paraguay

The Atlantic Forest, one of the most biodiverse biomes in the world, is also one of the most endangered. In Paraguay, its remnants are mostly fragmented and isolated. The Paraguay Biodiversity Corridor is an initiative that is being developed to generate and maintain connectivity of the main conservation areas. With the objective to analyze the bird richness and occurrence in each of the core areas of this corridor, we gathered published data, details of the management plans, and bird surveys recorded during 2015 and 2017 in these areas. In total, 557 bird species occur in the core areas of the Corridor, representing more than 80% of the birds of the country. San Rafael National Park and Mbaracayú Forest Nature Reserve are the richest areas, with 427 (70) and 408 (61) bird species (Atlantic forest endemics), respectively. These two areas also harbor more than 30 bird species of global conservation concern. Only 24% of the Corridor area is protected or sustainably managed, with only 10% under strict protection. The Corridor situated within this endangered biome encompasses some of the most important areas for bird conservation, but the situation of many of these areas is alarming as they are not protected or effectively managed to conserve their biodiversity. Restoration of connectivity, legal enforcement, and strengthening of authorities to combat deforestation on core areas, along with research focused on the impact contributed by human activities (selective logging, ecotoxicity exposure to agrochemicals) are key actions prioritized for the Upper Parana Atlantic forest (UPAF) Corridor. View Full-Text
Keywords: Atlantic forest; bird; Corridor; avifauna; richness; conservation Atlantic forest; bird; Corridor; avifauna; richness; conservation
►▼ Show Figures 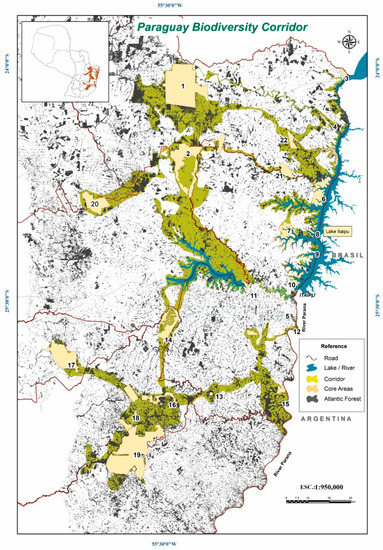