Malaria is the world’s most prevalent parasitic disease in terms of deaths, with an estimated 229 million cases and 409,000 victims according to the World Health Organization (WHO) in 2019 [1]. It is caused by parasites of the Plasmodium genus (mainly P. falciparum) and transmitted by the infectious bite of Anopheles mosquitoes. The first line treatment, artemisinin-based combination therapies (ACTs), combines an artemisinin derivative with another antimalarial compound. However, the reduction of both deaths and infections is threatened by multiple factors including the spread of parasite resistance to artemisinin and its derivatives [1]. This resistance is caused by mutations of the kelch13 protein [2] and is characterized clinically by delayed parasitic clearance potentially leading to treatment failure of ACTs [3]. Initially discovered in South-East Asia, where they have become widespread [3], kelch13 mutations are now found in Africa, where they have recently been linked to in vitro resistances against artemisinin derivatives [4,5]. Thus, discovery of new antimalarial compounds with novel mechanisms of action is a priority in the battle against malaria.
In 2015, Cohen et al. described compound M1 (Figure 1) [6], a 2-aminothieno[3,2-d]pyrimidin-4-one hydrochloride salt displaying an all-stage activity against P. falciparum associated with low toxicity, no mutagenicity and possessing an unknown mechanism of action. Many thienopyrimidine compounds are described as anticancerous compounds, mainly kinase inhibitors [7] and one thienopyrimidinone compound, TAK-931 (simurosertib, Cdc7 inhibitor, Figure 1) is currently in phase II clinical trial for the treatment of metastasic cancers [8].
As part of our ongoing medicinal chemistry work to improve M1 properties, a scaffold hopping strategy on the thienopyrimidine core was implemented for structure-activity relationships purposes. This led to the idea of replacing the pyrimidinone moiety by a [1,3,2]diazaborinin-4-one moiety, seeking to synthesize compounds in thieno[3,2-d][1,3,2]diazaborinin-4-one series and assess their activity in vitro against multi-resistant P. falciparum K1 strain (Scheme 1).
Boron-containing compounds possess various properties such as anti-cancerous and anti-infectious activities [9]. Boron in approved drugs (Figure 2) is found either as boronic acid (in bortezomib or ixazomib) or incorporated into a cycle, such as oxaborole or oxaborinane (like tavaborole or vaborbactam respectively).

We used reaction conditions described by Davies et al., starting from anthranilamide and various potassium trifluoroborates to afford benzo[d][1,3,2]diazaborin-4-ones in the presence of the boron trifluoride-ethylamine complex [10]. Since the tert-butylamine moiety could not be transposed onto a [1,3,2]diazaborin-4-one cycle, a cyclopropyl moiety was chosen as replacement. We decided to begin by synthesizing compound 2 (Scheme 2), since the starting materials are commercially available. Starting from 3-amino-5-phenylthiophene-2-carboxamide 1 and potassium cyclopropyltrifluoroborate with 3 equivalents of boron trifluoride ethylamine complex, we synthesized compound 2 in a 1:1 mixture of toluene and CPME after one day at 80 °C (Scheme 2). Small adjustments to the conditions in Davies et al. [10], were made, slightly increasing the quantity of potassium trifluoroborate (1.2 equivalent here vs. 1.05) and the reaction time (24 h here vs. 16 h). An excellent yield of 93% was obtained with simple filtration as extraction/purification protocol to afford target compound 2.

The next step was to assess the antiplasmodial activity in vitro against P. falciparum strain, but this raised concerns as to the potential aqueous stability of compound 2. Indeed, benzo[d][1,3,2]diazaborin-4-ones obtained from anthranilamide are reported to be a protecting group for boronic acids and able to generate air-stable boronic acid precursors [11,12,13]. Davies et al. reported relative stability in neutral or acid pH for their benzo[d][1,3,2]diazaborin-4-ones derivatives, but with very small amounts of D2O (from 6 to 16 µL).
Therefore, a stability assay was performed on 2 (Figure 3): the compound was dissolved in DMSO-d6, a small amount of D2O was added and the stability of the compound was then monitored via 1H NMR (see Materials and Methods for complete procedure). Upon addition of D2O, signal changes can be seen on the two singlets around 9 ppm on the green spectra. After 16 h, 2 is completely degraded (Scheme 3, Supplementary Materials Figures S1, S4 and S5). New signals correspond to the starting material 1 [14] and cyclopropyl boronic acid [15] resulting from the hydrolysis of 2.
Like benzo[d][1,3,2]diazaborinin-4-ones, 2 was found to be completely air stable up to one year after its synthesis when stored in a closed hemolysis tube. It is also stable in DMSO-d6 only up to 72 h after dissolution (Supplementary Materials Figures S6 and S7).
To the best of our knowledge, this is the first description of thieno[3,2-d][1,3,2]diazaborinin-4(1H)-one. However, its incompatibility with aqueous media makes it inappropriate as a potential drug candidate.

Data presented in this study are available in this article and its Supplementary Materials. 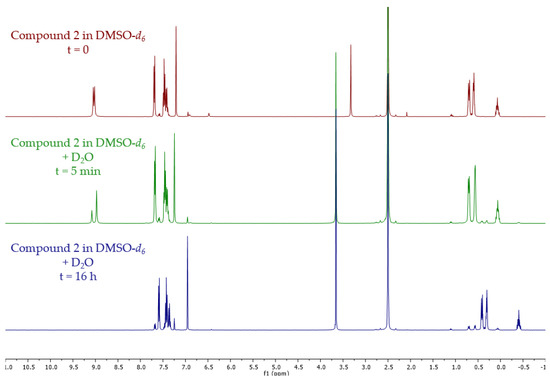 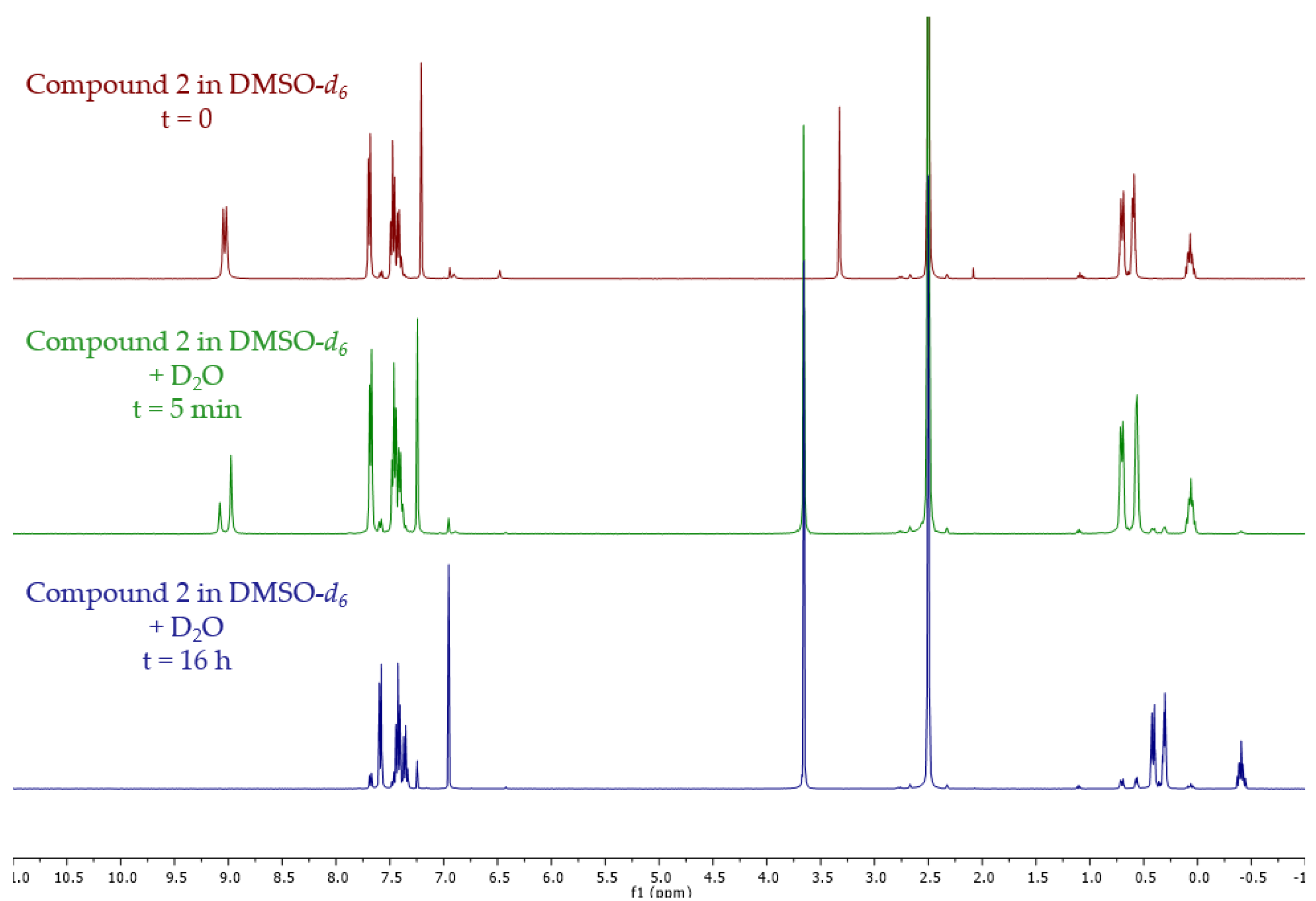