Prostate cancer (PCa) is a common cancer among men around the world [1]. PCa spread to nearby organs, tissues and other parts of the body including lymph nodes and bones [2]. After spreading, cancer cells attach to the other tissues and grow to form new tumors that can cause damage where they land [3]. Reportedly, a quarter of men with PCa in the world have a metastatic disease and the 5-year survival rate of patients with metastasis to distant sites is 29% [4]. PCa cells are known to have largely aggressive properties [5]. Since these tumors need a blood supply to grow and spread through blood circulation [6], it is important to shut off the blood supply to prevent tumor growth and metastasis in PCa.
Vasculogenic mimicry (VM), discovered in 1999 [7], is the alternative neovascularization by aggressive tumor cells without the presence of endothelial cells (ECs) and it functions as blood vessels by ECs [8,9,10]. Blood supply is the indispensable process for cancer cells to grow and metastasize through providing oxygen and nutrients [11]. However, the therapeutic efficacy of drugs targeting only blood vessels by ECs is limited due to an adequate blood supply through a new pattern such as VM [12,13,14]. VM has appeared in various types of cancer including PCa and is related to poor prognosis of cancer patients by meta-analysis [15,16]. Overall survival (OS) and disease-free survival (DFS) were significantly lower in VM-positive PCa patients [17]. Since VM has the essential effects on tumor progression, VM is a new therapeutic strategy to improve the therapeutic efficacy of cancer patients including PCa.
Sp1 transcription factor is overexpressed in many types of cancer cells including PCa and controls several genes that are involved in many cellular processes, including cell differentiation, cell growth, apoptosis, angiogenesis, and response to DNA damage [18,19,20,21]. Additionally, it contributes to progression and metastasis of PCa [21]. Therefore, Sp1 is an attractive target of cancer treatment in PCa patients. Although there are many studies on the functions of Sp1, there is no evidence of the relationship between Sp1 and VM formation. Among human PCa cell lines, PC-3 and DU145 cells have a powerful property of VM formation compared with LNCaP cells [22]. Thus, this study investigated whether and how Sp1 affects VM formation in human PCa PC-3 and DU145 cells.

PC-3 cells were treated with an increasing concentration of serum for 24 h and then the expression level of Sp1 was checked by Western blot. Sp1 was dramatically upregulated by serum in a dose-dependent manner (Figure 1A). Since serum promotes VM formation of PC-3 cells [23], to determine the role of Sp1 and VM formation, loss-of-function approach was introduced. PC-3 cells were treated with a selective Sp1 inhibitor, mithramycin A (MiA), or were transfected with the siRNA-targeting Sp1 gene. First, the cell viability assay was performed to determine non-cytotoxic concentrations of MiA and Sp1 siRNA. There was no cytotoxic effect of MiA or siRNA up to 200 nM or 15 nM, respectively (Figure 1B,C). This study used 100 and 200 nM of MiA or 15 nM of siRNA for subsequent experiments. Serum-upregulated Sp1 expression was effectively inhibited by MiA or Sp1 silencing (Figure 1D,E). To determine whether Sp1 is associated with VM formation, 3D culture VM formation assay was performed in PC-3 cells after MiA treatment or transfection with Sp1 siRNA. Serum stimulation led to the induction of tubular channels by PC-3 cells, which was effectively reduced by MiA in a dose-dependent manner (Figure 1F). Similarly, Sp1 silencing had an obvious inhibitory effect on serum-induced the formation of tubular channels (Figure 1G).
To verify a role of Sp1 in VM formation, a Western blot for Sp1 after serum treatment and transfection with Sp1 siRNA, and 3D culture VM formation assay after transfection with Sp1 siRNA were performed in another PCa DU145 cells. Consistent with the results from PC-3 cells, Sp1 was upregulated by serum in DU145 cells (Figure 2A). Additionally, serum-induced VM formation was significantly reduced after Sp1 silencing in DU145 cells (Figure 2B,C).
To confirm a novel functional role of Sp1 in VM formation, a gain-of-function approach was introduced using Sp1 CRISPR activation plasmid in both PC-3 and DU145 PCa cells. Sp1 overexpression caused an effective increase in VM tubular formation compared with control plasmid without serum in both PC-3 (Figure 3A) and DU145 cells (Figure 3B) by a 3D culture VM formation assay.
Taken together, Sp1 silencing inhibited serum-stimulated VM formation, whereas Sp1 overexpression triggered VM formation in PCa cells, suggesting that Sp1 is required to induce VM formation in PCa cells.

2.3. Sp1 Promotes the Activation of AKT Pathway in PC-3 Cells

VM is the formation of a vessel-like network lined by cancer cells. The function of VM is similar to that of blood vessels formed by ECs [8,9,10]. VM strongly participates in tumor invasion, metastasis, and growth through a blood supply and is closely related to poor prognosis in cancer patients [8,15,24]. VM-positive PCa patients showed high Gleason scores and distance metastasis as well as short OS and DFS [17]. The Sp1 transcription factor plays a crucial role in the progression and metastasis of PCa [21]. However, the involvement of Sp1 in VM formation has not been determined yet. Therefore, this study investigated a novel functional role of Sp1 in the process of VM in human PCa cells.
Since a previous study demonstrated that serum promotes VM formation in human PCa PC-3 cells [23], this study focused on Sp1 to explore an underlying molecular mechanism of VM. As expected, serum dramatically upregulated the expression of Sp1 at the protein level in both PCa PC-3 and DU145 cells (Figure 1A and Figure 2A). To elucidate a novel functional role of Sp1 in VM formation, MiA and Sp1 siRNA used for a loss-of-function approach and Sp1 CRISPR activation plasmid was used for a gain-of-function approach. The inhibition of Sp1 by MiA and Sp1 siRNA caused the perfect blockage in VM formation induced by serum (Figure 1 and Figure 2). On the contrary, despite the absence of serum, the overexpression of Sp1 by CRIPSR activation plasmid sufficiently formed VM (Figure 3). Therefore, these results clearly demonstrate that Sp1 may be an important factor in the process of VM formation in PCa cells.
Highly aggressive tumor cells overexpress VE-cadherin, but not non-aggressive tumor cells [25]. VE-cadherin, an endothelial-specific junction molecule, is a biomarker of VM and plays a crucial role in VM formation [26,27,28]. The endothelial-specific transcriptional active region of VE-cadherin contains the Sp1 binding site [29,30], highlighting the relationship between Sp1 and VE-cadherin. In this study, the serum-upregulated expressions of VE-cadherin at the protein and mRNA levels were decreased after treatment with MiA or Sp1 siRNA (Figure 4), highlighting the transcriptional regulation of VE-cadherin expression. However, the overexpression of Sp1 upregulated the protein expression of VE-cadherin (Figure 4C). Twist is a transcription factor that regulates the expression of VE-cadherin [31,32]. Twist has been reported to be associated with tumor metastasis and angiogenesis [33] and also regulates VM formation [32]. In this study, serum-treated PC-3 cells were found to increase the expression of twist in the nucleus, which was reduced by the inhibition of Sp1 by MiA or siRNA (Figure 5A,B). However, the overexpression of Sp1 elevated the protein expression of twist (Figure 5C). Sp1 interacted with twist, which was significantly reduced by MiA treatment (Figure 5F). Taken together, these results revealed that Sp1 regulates the expression of VE-cadherin by interacting with twist in the nucleus.
Multiple signaling pathways such as AKT, FAK, hypoxia, and nodal/notch contribute to VM formation [8,24]. Among them, as a downstream signaling of VE-cadherin, AKT is activated by VE-cadherin [8,34]. Then, activated AKT elevates the expressions of matrix metalloproteinases (MMPs) such as MMP-2 and -14, thereby leading to VM formation through the remodeling of the extracellular matrix including LAMC2 [8,24]. Additionally, AKT promotes cancer cell growth, proliferation, and malignant behavior [35]. A previous study demonstrated that the AKT/MMP-2/LAMC2 signal transduction pathway participates in VM formation in response to serum [23]. Sp1 knockdown suppressed tumor progression by inhibiting AKT and ERK signaling [36]. AKT-mediated VEGF mRNA expression required Sp1 [37]. These reports indicated that Sp1 may be involved in the AKT signaling pathway. In this study, the serum-induced phosphorylation of AKT in PC-3 cells was seen to decrease when Sp1 was suppressed by MiA or siRNA (Figure 6A,B). However, the overexpression of Sp1 enhanced the phosphorylation of AKT (Figure 6C). Meanwhile, AKT signaling also regulated the Sp1 expression. Both serum-upregulated MMP-2 and LAMC2 expressions were decreased when Sp1 was inhibited by MiA or siRNA (Figure 6A,B). On the contrary, the overexpression of Sp1 enhanced the expression levels of MMP-2 and LAMC2 (Figure 6C). These results verified that Sp1 is involved in the AKT pathway to induce VM in PC-3 cells.
In conclusion, this study demonstrated a novel functional role of Sp1 in VM formation through loss- and gain-of-function approaches and these results are summarized in Figure 7. Sp1 regulated the expression of VE-cadherin through controlling the nuclear expression of transcription factor, twist. Sp1-induced the upregulation of twist/VE-cadherin in turn activated the AKT pathway including MMP-2 and LAMC2, thereby causing an induction of VM. Taken together, Sp1 plays a key role in VM formation through the twist/VE-cadherin/AKT pathway in human PCa cells. These results may provide a new therapeutic strategy for the treatment of PCa patients associated with VM through targeting Sp1.

The total cell lysate (300 μg) were mixed with 0.5 μg of twist antibody (Abcam plc., Cambrige, UK) for 1 h at 4 °C and then added protein A/G agarose (Santa Cruz Biotechnology, Inc., Danvers, MA, USA) for 1 h at 4 °C. The beads were collected by centrifugation and washed 3 times with lysis buffer. The immunoprecipitated protein complexes were analyzed by Western blot. 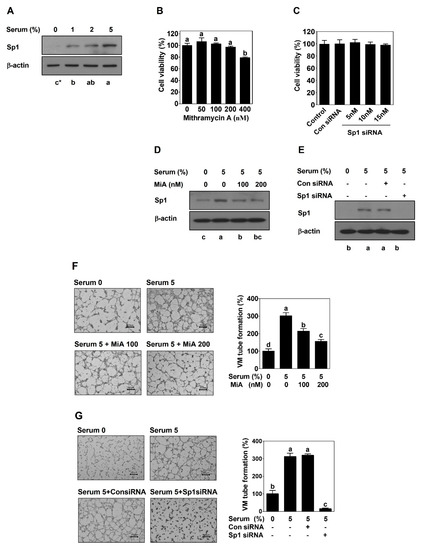 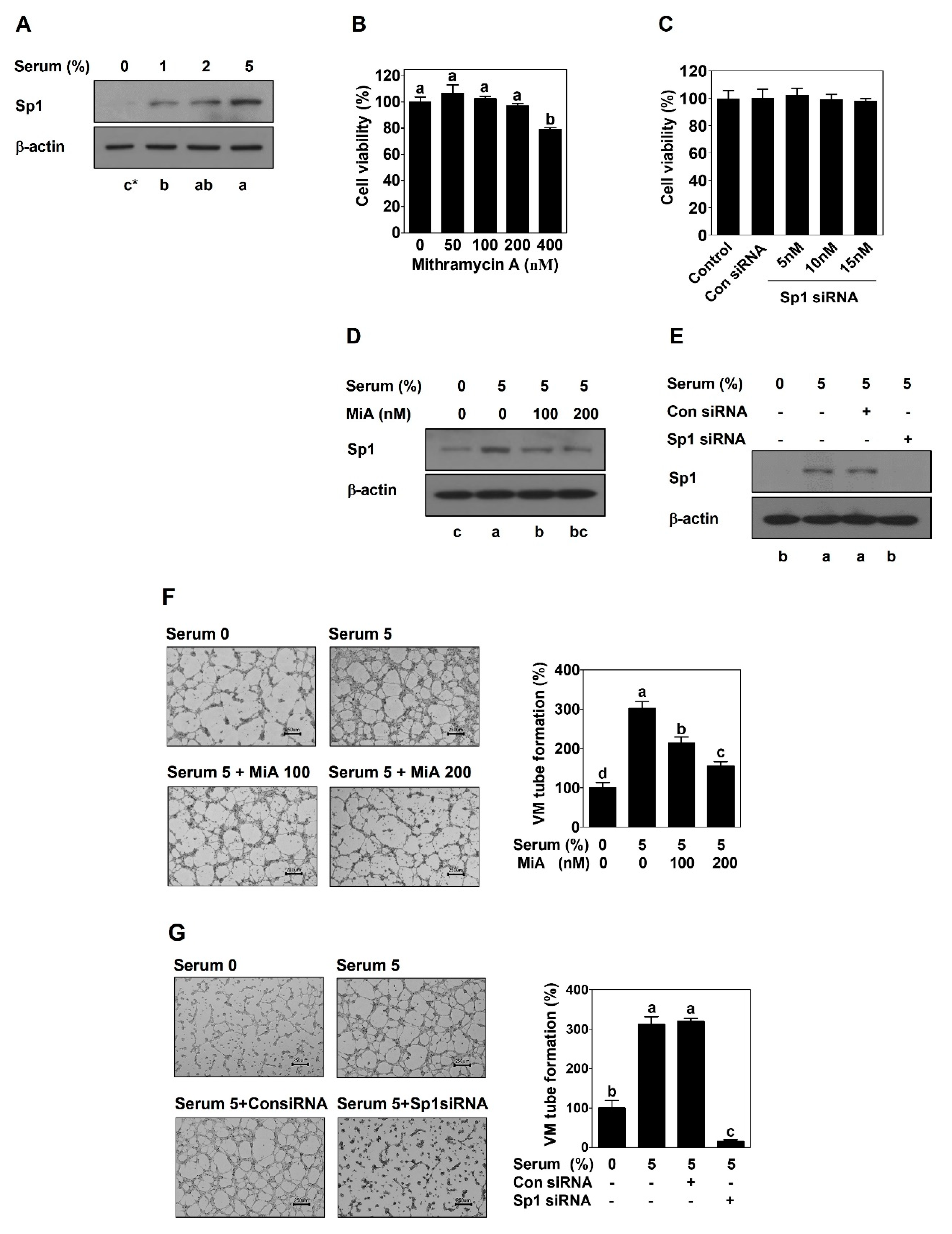 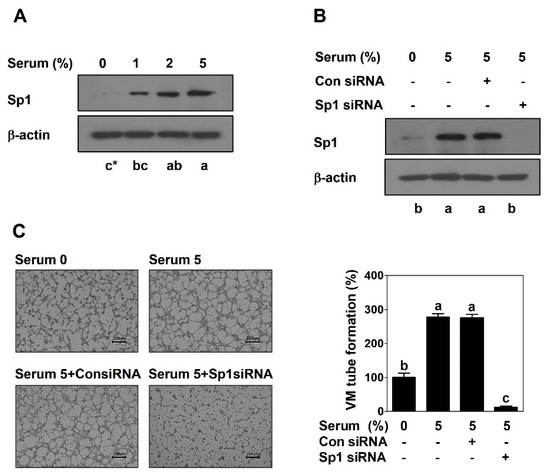 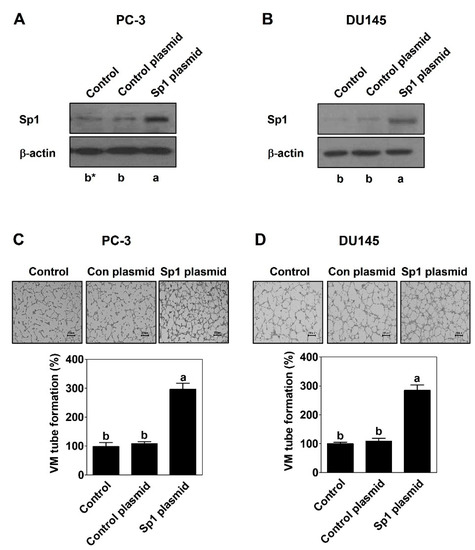 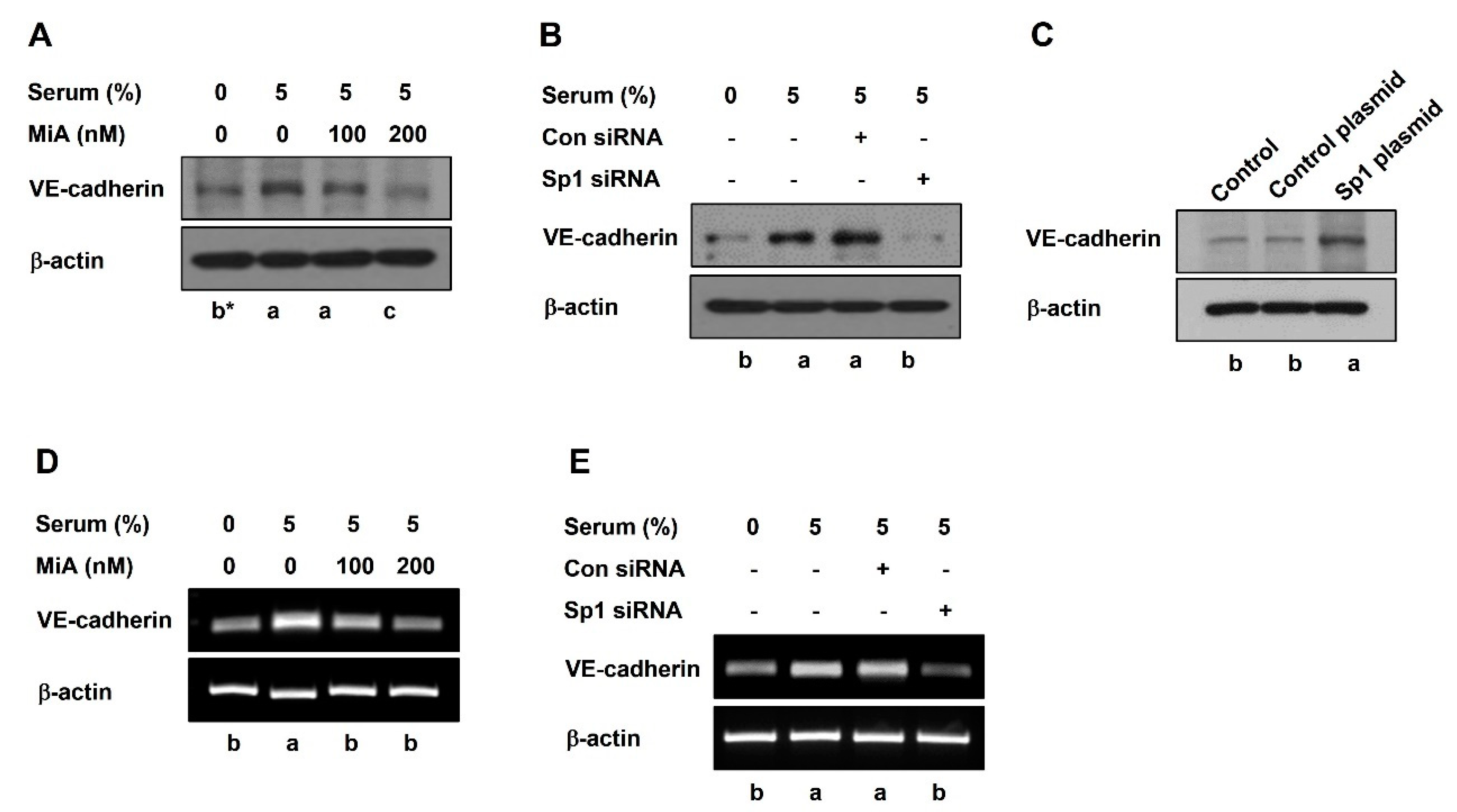 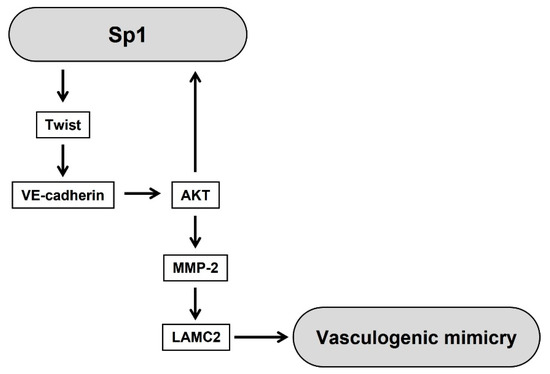 Table 1. Antibodies used in this study.
Table 1. Antibodies used in this study.
Santa Cruz Biotechnology, Inc. (Danvers, MA, USA); CST, Cell Signaling Technology (Beverly, MA, USA); Sigma-Aldrich (St Louis, MO, USA); Abcam plc. (Cambrige, UK); Abgent (San Diego, CA, USA).
© 2022 by the authors. Licensee MDPI, Basel, Switzerland. This article is an open access article distributed under the terms and conditions of the Creative Commons Attribution (CC BY) license (https://creativecommons.org/licenses/by/4.0/).
We use cookies on our website to ensure you get the best experience. Read more about our cookies here.
Accept
We have just recently launched a new version of our website. Help us to further improve by taking part in this short 5 minute survey here. here.
Never show this again