Study of Thermal Properties, Molecular Dynamics, and Physical Stability of Etoricoxib Mixtures with Octaacetylmaltose near the Glass Transition
Next Article in Special Issue

Molecular Basis of the Schuurs–Hoeijmakers Syndrome: What We Know about the Gene and the PACS-1 Protein and Novel Therapeutic Approaches

Limb-girdle muscular dystrophies (LGMD) are clinically and genetically heterogenous presentations displaying predominantly proximal muscle weakness due to the loss of skeletal muscle fibers. Beta-sarcoglycanopathy (LGMDR4) results from biallelic molecular defects in SGCB and features pediatric onset with limb-girdle involvement, often complicated by respiratory and heart dysfunction. Here we describe a patient who presented at the age of 12 years reporting high creatine kinase levels and onset of cramps after strenuous exercise. Instrumental investigations, including a muscle biopsy, pointed towards a diagnosis of beta-sarcoglycanopathy. NGS panel sequencing identified two variants in the SGCB gene, one of which (c.243+1548T>C) was found to promote the inclusion of a pseudoexon between exons 2 and 3 in the SGCB transcript. Interestingly, we detected the same genotype in a previously reported LGMDR4 patient, deceased more than twenty years ago, who had escaped molecular diagnosis so far. After the delivery of morpholino oligomers targeting the pseudoexon in patient-specific induced pluripotent stem cells, we observed the correction of the physiological splicing and partial restoration of protein levels. Our findings prompt the analysis of the c.243+1548T>C variant in suspected LGMDR4 patients, especially those harbouring monoallelic SGCB variants, and provide a further example of the efficacy of antisense technology for the correction of molecular defects resulting in splicing abnormalities. View Full-Text
Keywords: LGMD; SGCB; beta-sarcoglycan; morpholino LGMD; SGCB; beta-sarcoglycan; morpholino
►▼ Show Figures 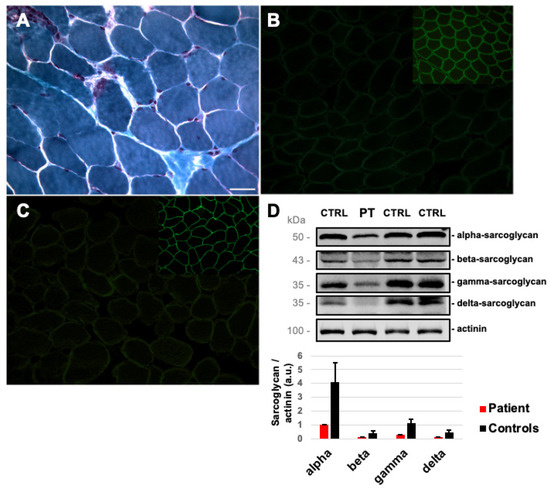