Dietary Influences on the Microbiota–Gut–Brain Axis

Over unimaginable expanses of evolutionary time, our gut microbiota have co-evolved with us, creating a symbiotic relationship in which each is utterly dependent upon the other. Far from confined to the recesses of the alimentary tract, our gut microbiota engage in complex and bi-directional communication with their host, which have far-reaching implications for overall health, wellbeing and normal physiological functioning. Amongst such communication streams, the microbiota–gut–brain axis predominates. Numerous complex mechanisms involve direct effects of the microbiota, or indirect effects through the release and absorption of the metabolic by-products of the gut microbiota. Proposed mechanisms implicate mitochondrial function, the hypothalamus–pituitary–adrenal axis, and autonomic, neuro-humeral, entero-endocrine and immunomodulatory pathways. Furthermore, dietary composition influences the relative abundance of gut microbiota species. Recent human-based data reveal that dietary effects on the gut microbiota can occur rapidly, and that our gut microbiota reflect our diet at any given time, although much inter-individual variation pertains. Although most studies on the effects of dietary macronutrients on the gut microbiota report on associations with relative changes in the abundance of particular species of bacteria, in broad terms, our modern-day animal-based Westernized diets are relatively high in fats and proteins and impoverished in fibres. This creates a perfect storm within the gut in which dysbiosis promotes localized inflammation, enhanced gut wall permeability, increased production of lipopolysaccharides, chronic endotoxemia and a resultant low-grade systemic inflammatory milieu, a harbinger of metabolic dysfunction and many modern-day chronic illnesses. Research should further focus on the colony effects of the gut microbiota on health and wellbeing, and dysbiotic effects on pathogenic pathways. Finally, we should revise our view of the gut microbiota from that of a seething mass of microbes to one of organ-status, on which our health and wellbeing utterly depends. Future guidelines on lifestyle strategies for wellbeing should integrate advice on the optimal establishment and maintenance of a healthy gut microbiota through dietary and other means. Although we are what we eat, perhaps more importantly, we are what our gut microbiota thrive on and they thrive on what we eat. View Full-Text
Keywords: gut microbiota; brain; diet; appetite; metabolism gut microbiota; brain; diet; appetite; metabolism
►▼ Show Figures 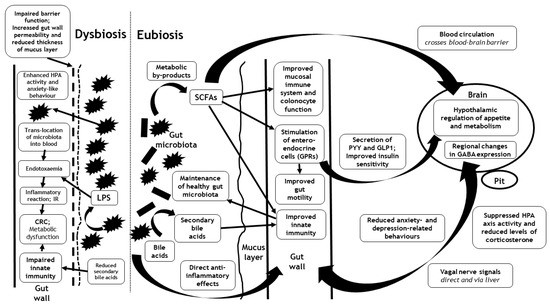