Why Is the Invasive Plant Sphagneticola trilobata More Resistant to High Temperature Than Its Native Congener?

A Transcriptomic Approach to Understanding the Combined Impacts of Supra-Optimal Temperatures and CO2 Revealed Different Responses in the Polyploid Coffea arabica and Its Diploid Progenitor C. canephora

Understanding the effect of extreme temperatures and elevated air (CO2) is crucial for mitigating the impacts of the coffee industry. In this work, leaf transcriptomic changes were evaluated in the diploid C. canephora and its polyploid C. arabica, grown at 25 °C and at two supra-optimal temperatures (37 °C, 42 °C), under ambient (aCO2) or elevated air CO2 (eCO2). Both species expressed fewer genes as temperature rose, although a high number of differentially expressed genes (DEGs) were observed, especially at 42 °C. An enrichment analysis revealed that the two species reacted differently to the high temperatures but with an overall up-regulation of the photosynthetic machinery until 37 °C. Although eCO2 helped to release stress, 42 °C had a severe impact on both species. A total of 667 photosynthetic and biochemical related-DEGs were altered with high temperatures and eCO2, which may be used as key probe genes in future studies. This was mostly felt in C. arabica, where genes related to ribulose-bisphosphate carboxylase (RuBisCO) activity, chlorophyll a-b binding, and the reaction centres of photosystems I and II were down-regulated, especially under 42°C, regardless of CO2. Transcriptomic changes showed that both species were strongly affected by the highest temperature, although they can endure higher temperatures (37 °C) than previously assumed. View Full-Text
Keywords: climate changes; coffee; elevated air (CO2); functional analysis; high temperatures; leaf RNAseq; polyploidy; warming climate changes; coffee; elevated air (CO2); functional analysis; high temperatures; leaf RNAseq; polyploidy; warming
►▼ Show Figures 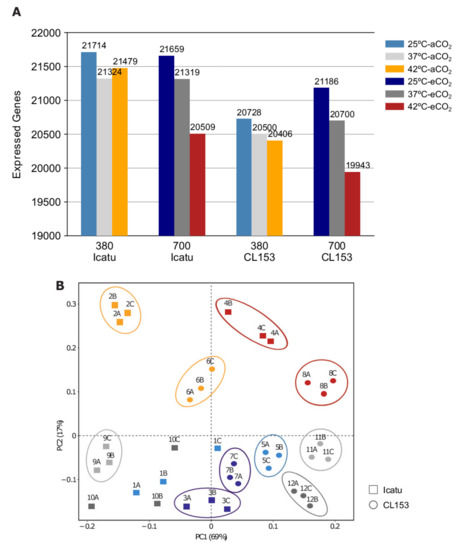