PhenQE8, a Novel Ligand of the Human Telomeric Quadruplex
Previous Article in Journal

Why Is the Invasive Plant Sphagneticola trilobata More Resistant to High Temperature Than Its Native Congener?

Climate change and invasive alien species threaten biodiversity. High temperature is a worrying ecological factor. Most responses of invasive plants aimed at coping with adversity are focused on the physiological level. To explore the molecular mechanisms underlying the response of an invasive plant (Sphagneticola trilobata L.) to high temperature, using a native species (Sphagneticola calendulacea L.) as the control, relevant indicators, including photosynthetic pigments, gas exchange, chlorophyll fluorescence, the antioxidant system, and related enzyme-coding genes were measured. The results showed that the leaves of S. calendulacea turned yellow, photosynthetic pigment content (Chl a, Chl b, Car, Chl) decreased, gas exchange (Pn) and chlorophyll fluorescence parameters (Fv/Fm, ΦPSII) decreased under high temperature. It was also found that high temperature caused photoinhibition and a large amount of ROS accumulated, resulting in an increase in MDA and relative conductivity. Antioxidant enzymes (including SOD, POD, CAT, and APX) and antioxidants (including flavonoids, total phenols, and carotenoids) were decreased. The qPCR results further showed that the expression of the PsbP, PsbA, and RubiscoL, SOD, POD, CAT, and APX genes was downregulated, which was consistent with the results of physiological data. Otherwise, the resistance of S. trilobata to high temperature was better than that of S. calendulacea, which made it a superior plant in the invasion area. These results further indicated that the gradual warming of global temperature will greatly accelerate the invasion area of S. trilobata. View Full-Text
Keywords: high temperature stress; Sphagneticola; gene expression; photosynthesis high temperature stress; Sphagneticola; gene expression; photosynthesis
►▼ Show Figures 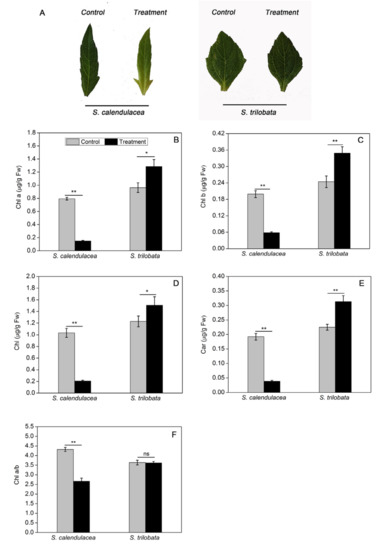