Endocrine-disrupting chemicals include natural and synthetic estrogens, such as 17α-ethynilestradiol (EE2), which can affect reproduction, growth and immunity. Estrogen signalling is mediated by nuclear or membrane estrogen receptors, such as the new G-protein-coupled estrogen receptor 1 (GPER1). The present work studies the effect of EE2 and G1 (an agonist of GPER1) on body and muscle parameters and growth-related genes of 54 two-year-old seabreams. The fish were fed a diet containing EE2 (EE2 group) and G1 (G1 group) for 45 days and then a diet without EE2 or G1 for 122 days. An untreated control group was also studied. At 45 days, the shortest body length was observed in the G1 group, while 79 and 122 days after the cessation of treatments, the shortest body growth was observed in the EE2 group. Hypertrophy of white fibers was higher in the EE2 and G1 groups than it was in the control group, whereas the opposite was the case with respect to hyperplasia. Textural hardness showed a negative correlation with the size of white fibers. At the end of the experiment, all fish analyzed in the EE2 group showed a predominance of the gonadal ovarian area. In addition, the highest expression of the mafbx gene (upregulated in catabolic signals) and mstn2 (myogenesis negative regulator) was found in EE2-exposed fish. View Full-Text
Keywords: EE2; GPER1; body growth; muscle cellularity; muscle growth regulator genes EE2; GPER1; body growth; muscle cellularity; muscle growth regulator genes
►▼ Show Figures 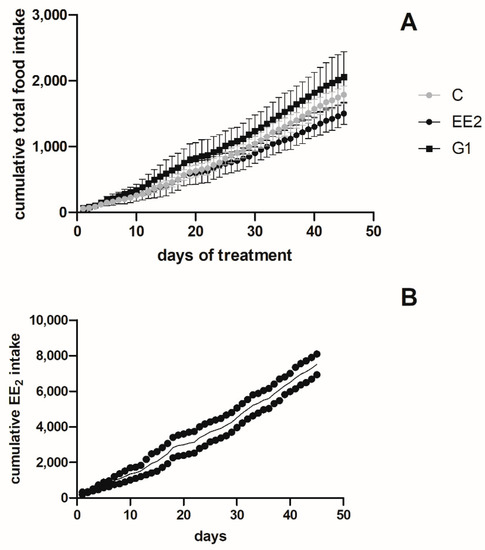