The Different Faces of the TDP-43 Low-Complexity Domain: The Formation of Liquid Droplets and Amyloid Fibrils
Next Article in Special Issue

The EphB6 Receptor: Kinase-Dead but Very Much Alive
Previous Article in Special Issue

Urea is commonly used as a cost-efficient replacement of feed proteins to provide the sole nitrogen source for urease [1,2,3]. In rumens, urease catalyzes the hydrolysis of urea into ammonia, which can be synthesized into microbial protein to support the requirements for animal growth, meat or milk production [4]. However, the high urease activity leads to excessive ammonia production, which not only results in the explosion of toxic ammonia in the blood, but is also converted to volatile ammonia and escapes into the environment [5,6]. Emissions of nitrogen have been recognized as one of the major drivers in the production of greenhouse gases and wastewater and soil pollution. The livestock industry contributes approximately 65 Tg·N·yr−1, which is roughly one-third of the global human-induced nitrogen emissions [7]. Ruminant nitrogen is the major source of livestock pollution, with approximately 46 Tg·N·yr−1, equivalent to 71% of the total nitrogen emissions from livestock [7]. For ruminants, the dietary nitrogen utilization efficiency is only about 25% [8,9], with as much as 60–90% of the feed nitrogen being excreted [10]. Taken together, regulation of urease activity is crucial to reduce ammonia emissions and improve the efficiency of urea-N utilization in ruminants, and urease inhibitors have been recognized as one of the most effective strategies.
There are many kinds of urease inhibitors (Table S1), including those that attack the active center of urease, such as urea analogues [11], hydroxamic acids [12], phosphoramide and their derivatives [13], as well as other inhibitors that interact with the flap regions near active centers, such as 1, 4-benzoquinone [14], catechol [15], and some heavy metal ions [16]. However, only acetohydroxamic acid (AHA) is a commercially available urease inhibitor approved by the Food and Drug Administration for the treatment of humans and animals [17]. Unfortunately, significant adverse effects, including deep-vein phlebothrombosis, lower-extremity phlebitis, and malformation of embryos, have been reported [18]. In rumens, AHA was found to degrade rapidly, and inhibit the growth of rumen microorganisms other than urease-producing bacteria [19]. In recent years, plant-derived natural compounds (including that shown in Graphical Abstract [20,21,22,23]) have been preferred for their low toxicity, chemically stability, eco-friendliness and high efficiency at low concentrations [24]. Gnetegha Ayemele et al. [25] screened giant milkweed as an alternative plant-derived feed additive, which could improve nitrogen utilization efficiency by inhibiting protozoa in ruminants without impairing fermentation. Limited studies have found that natural compounds such as terpenoids, phenolic compounds, alkaloids, and other substances were inhibitory towards the activities of plant and microbial ureases [26]. These findings suggest that natural compounds have great potential as urease inhibitors.
The active center of urease is deeply buried in apo-urease, with an unobserved wide-open state [27]. Additionally, urease is a highly specific substrate of urea [28], which makes it challenging to design new urease inhibitors based on the active center. Accessory protein UreG, which is a GTPase involved in transferring nickel to the active center and activating urease upon GTP hydrolysis, plays an important role in urease maturation [29]. It has been reported [30,31] that UreG receives nickel from the accessory protein UreE through the formation of an UreE-UreG complex. Subsequently, nickel-charged UreG delivered nickel to the active center of apo-urease by forming an UreG-UreFH complex and apo-urease/UreGFH super-complex, in which GTP hydrolysis induced the conformational changes of UreG, and promoted the insertion of nickel into the active center. Moreover, UreG and urease maturation are relatively conserved among different urease-producing bacteria [32]. Disruption of the urease maturation process by abolishing UreG function has been proposed as a new strategy to develop urease inhibitors.
We identified a predominant urease gene cluster from an uncultured ruminal bacterium using metagenome, and revealed the characteristics of UreG interacting with UreE as well as transferring nickel previously [33]. This study aimed to select potential ruminal microbial urease inhibitors from natural compounds by using UreG as a regulatory target. A natural compound was identified by detecting GTPase activity of UreG and virtual screening using molecular docking. The inhibition mechanisms were evaluated by kinetic study. Whether this compound could affect nickel binding to UreG, as well as the influencing mechanism were further explored. This study provides a new strategy of screening ruminal microbial urease inhibitors, and a novel natural compound of regulating ruminal urease activity.

Ruminal digesta samples were collected as described previously [48]. A 10 mL aliquot for the sample was used for protein extraction by ultrasonication (6 s each with 6 s intervals using 100 W on ice, total 10 min). The supernatant was collected by centrifugation at 16,000× g at 4 °C for 10 min, which was called ruminal microbial crude protein. The concentration of ammonia released was measured by a modified phenol/hypochlorite reaction method [49]. The ammonia release of rumen microbial protein without the chelerythrine chloride was set at 100%.

The 3D structure of UreG was modeled using the SWISS-MODEL server, in which KpUreG (PDB ID: 5XKT) was the template, with 77.39% sequence identity. The values of global model quality estimate (GMQE) and qualitative model energy analysis (QMEAN) were 0.92 and −0.15, respectively. The structures of natural compounds were downloaded from the Zink website (http://zinc.docking.org/, accessed on 30 July 2021). AutoDockTools (v.1.5.6) (Scripps, San Diego, CA, USA) was used for molecular docking studies of compounds and UreG, the receptor (UreG) was considered as a rigid structure molecule, and the ligand (natural compound) was considered as a flexible molecule. During docking, UreG receptor was used to delete water molecules, add polar hydrogens, and to calculate the gasteiger charges. All ligands were treated by adding hydrogens, gasteiger charges, and atom types. The application of grid box was to set the docking area of UreG with the search box of size (126, 80, 106) centered at (−1.515, 15.035, −20.547), and the grid point spacing was 0.375 Å. After that, the molecular docking was calculated by the genetic algorithm (GA) method, in which the number of GA runs was 10, the GA population size was 150, and maximum number of energy evolutions was set to 25,000,000. Ten poses were generated for each compound with different binding energy, and the lowest energy structure was considered as the best docking pose [55]. The software AutoDockTools was used to predict the inhibition constant (Ki) of small compounds and proteins. To better understand the interactions between the natural compound and UreG, the 3D docking results were analyzed using PyMol molecular graphics system.

To monitor whether chelerythrine chloride would affect the binding of nickel to UreG, ITC measurements were employed using an AutoITC200 microcalorimeter (GE, Boston, MA, USA). Except for the concentration of NiSO4 and UreG, the procedures for nickel binding to UreG were the same as those described previously [33], and 27 μM of UreG was titrated with 1500 μM NiSO4 in this study. The effects of chelerythrine chloride on Ni-UreG interaction were examined by adding 238 μM chelerythrine chloride to 27 μM sample of UreG and 1500 μM titrated sample of NiSO4, respectively. ITC measurements were performed at 25 °C with the reference cell filled with the same buffer (2 mM MgSO4, 200 μM GTP, 200 mM NaCl, 1 mM TCEP, 40 mM HEPES, pH 7.5) as that used for the experimental samples. The data were fitted with the one-site binding model from the ITC Analysis Module in Origin 7.0 (OriginLab, Hamptons, MA, USA).

The asymmetrical nature of the peptide bond makes the protein chiral and exhibits the CD phenomenon. CD is frequently used to detect the content of the secondary structure (α-helix, β-sheet, β-turn, random coil) in the protein [56,57,58]. To reduce the potential effect of buffer on CD spectroscopy, the UreG protein and chelerythrine chloride were prepared into distilled water. The final concentrations of UreG and chelerythrine chloride were 233 μg/mL and 88 μM, respectively. CD measurements of UreG with or without chelerythrine chloride were performed using a Chirascan Plus spectrometer (Applied Photophysics Ltd., Surrey, UK) between 190 and 260 nm. The CD spectra were recorded using a 1 mm quartz cell with a data pitch of 1 nm, time-per-point of 0.5 s, and bandwidth of 1 nm. To improve the reproducibility and accuracy, background spectra of the buffer (distilled water with or without chelerythrine chloride) before and after every sample run were recorded and subtracted from the sample spectra. The final data were smoothed using a Savitzky-Golay filter and analyzed using CDNN (v.2.1) software to calculate the percentages of secondary structure in the protein [59].

The following are available online at https://www.mdpi.com/article/10.3390/ijms22158212/s1, Table S1: Chemical structures of some urease inhibitors. Table S2: Kinetic parameters of UreG GTPase activity in the presence of different concentrations of chelerythrine chloride (0, 6.25, 12.5, and 25 μM).

This research was funded by the Scientific Research Project for Major Achievements of the Agricultural Science and Technology Innovation Program (CAAS-ZDXT2019004), China Agriculture Research System of MOF and MARA, and State Key Laboratory of Animal Nutrition (2004DA125184G2108).

The authors thank the National Protein Science facilities from the school of biomedicine at Tsinghua University for technical help with the ITC and CD assays, Sara Burgess from Massey University of New Zealand for editing language of manuscript, and Zhongtang Yu from the Ohio State University for valuable suggestions of manuscript. 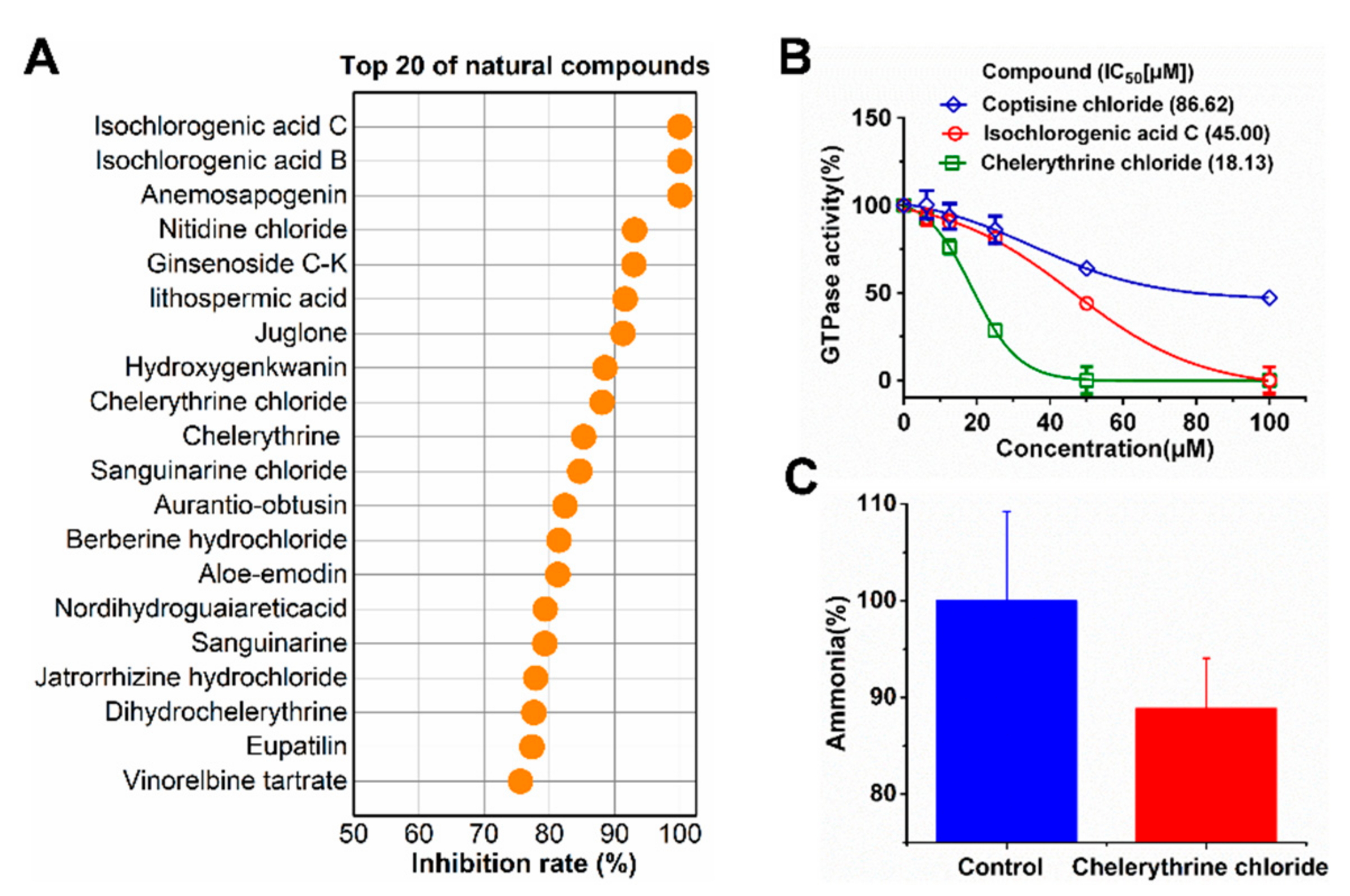 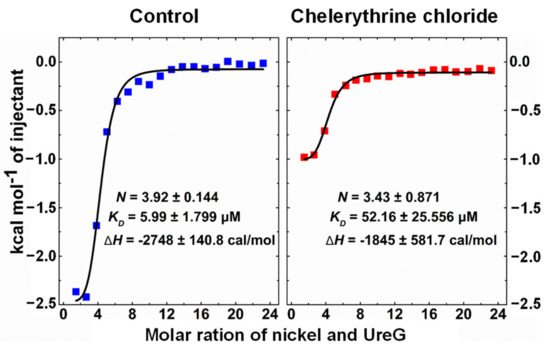 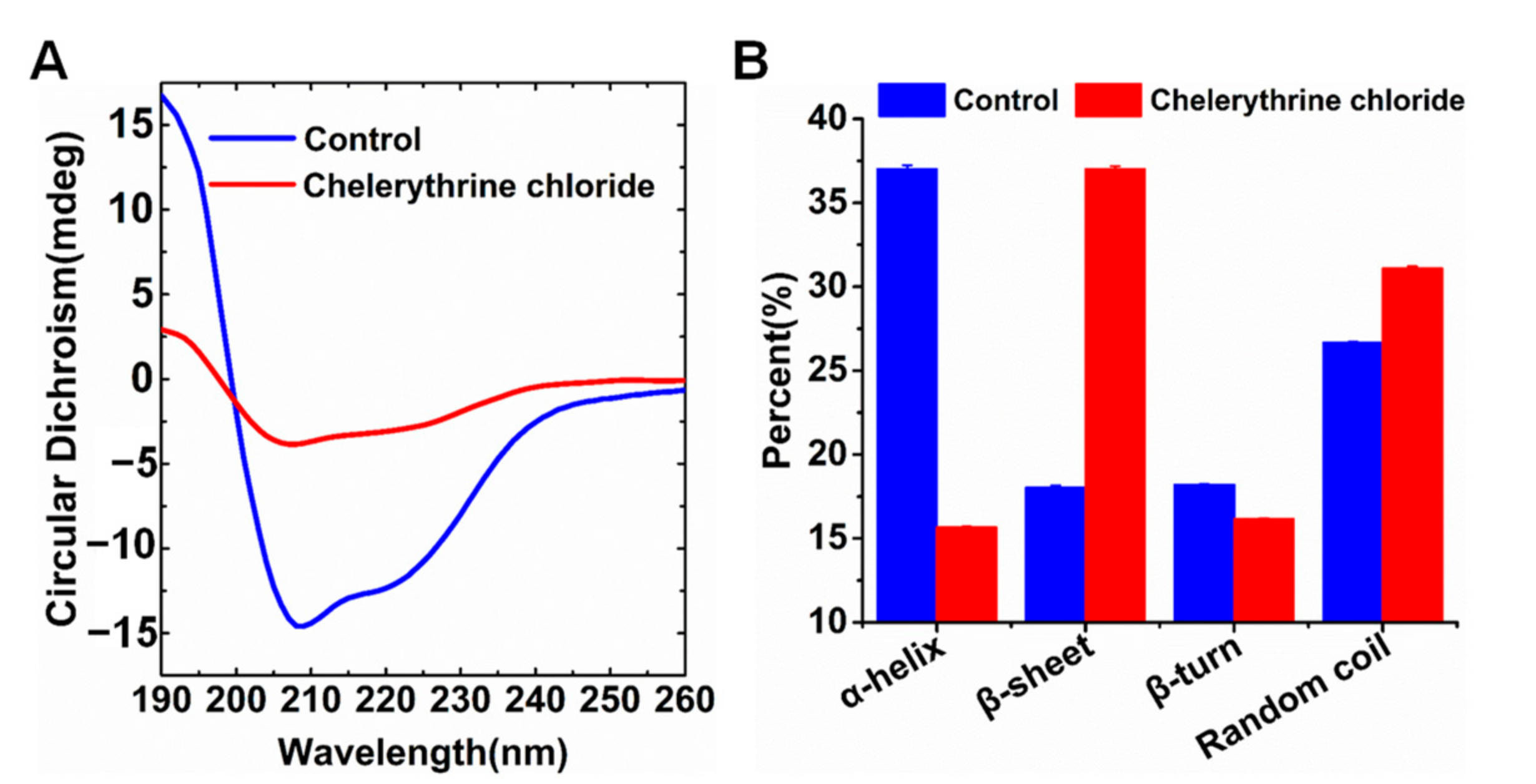