Tooth enamel is formed in an extracellular environment. Amelogenin, the major component in the protein matrix of tooth enamel during the developing stage, could assemble into high molecular weight structures, regulating enamel formation. However, the molecular structure of amelogenin protein assembly at the functional state is still elusive. In this work, we found that amelogenin is able to induce calcium phosphate minerals into hydroxyapatite (HAP) structure in vitro at pH 6.0. Assessed using X-ray diffraction (XRD) and 31P solid-state NMR (SSNMR) evidence, the formed HAP mimics natural enamel closely. The structure of amelogenin protein assembly coexisting with the HAP was also studied using atomic force microscopy (AFM), transmission electron microscopy (TEM) and XRD, indicating the β-amyloid structure of the protein. SSNMR was proven to be an important tool in detecting both the rigid and dynamic components of the protein assembly in the sample, and the core sequence 18EVLTPLKWYQSI29 was identified as the major segment contributing to the β-sheet secondary structure. Our research suggests an amyloid structure may be an important factor in controlling HAP formation at the right pH conditions with the help of other structural components in the protein assembly. View Full-Text
Keywords: amelogenin; hydroxyapatite; enamel biomimetic; protein assembly structure; solid-state NMR amelogenin; hydroxyapatite; enamel biomimetic; protein assembly structure; solid-state NMR
►▼ Show Figures 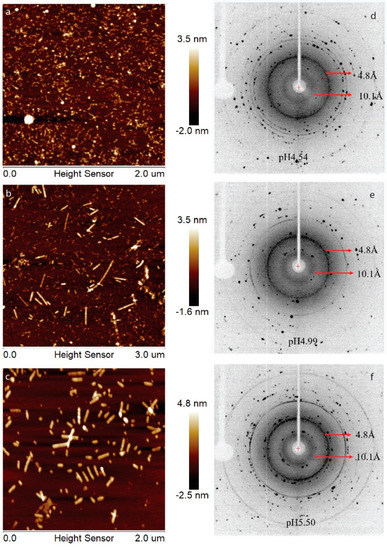