Chondrosarcoma is the second most common malign bone tumor in adults. Surgical resection of the tumor is recommended because of its resistance to clinical treatment such as chemotherapy and radiation therapy. Thus, the prognosis for patients mainly depends on sufficient surgical resection. Due to this, research on alternative therapies is needed. Cold atmospheric plasma (CAP) is an ionized gas that contains various reactive species. Previous studies have shown an anti-oncogenic potential of CAP on different cancer cell types. The current study examined the effects of treatment with CAP on two chondrosarcoma cell lines (CAL-78, SW1353). Through proliferation assay, the cell growth after CAP-treatment was determined. A strong antiproliferative effect for both cell lines was detected. By fluorescein diacetate (FDA) assay and ATP release assay, alterations in the cell membrane and associated translocation of low molecular weight particles through the cytoplasmic membrane were observed. In supernatant, the non-membrane-permeable FDA and endogenously synthesized ATP detected suggest an increased membrane permeability after CAP treatment. Similar results were shown by the dextran-uptake assay. Furthermore, fluorescence microscopic G-/F-actin assay was performed. G- and F-actin were selectively dyed, and the ratio was measured. The presented results indicate CAP-induced changes in cell membrane function and possible alterations in actin-cytoskeleton, which may contribute to the antiproliferative effects of CAP. View Full-Text
Keywords: chondrosarcoma; cold atmospheric plasma; membrane functionality; growth inhibition chondrosarcoma; cold atmospheric plasma; membrane functionality; growth inhibition
►▼ Show Figures 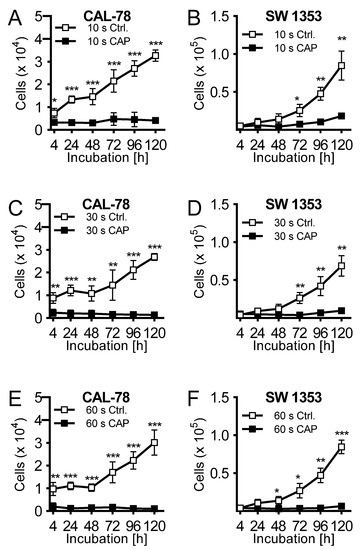