Preparation and Characterization of Aptamers Against O,p’-DDT

Human microbiota is heavily involved in host health, including the aging process. Based on the hypothesis that the human microbiota manipulates host aging via the production of chemical messengers, lifespan-extending activities of the metabolites produced by the oral commensal bacterium Corynebacterium durum and derivatives thereof were evaluated using the model organism Caenorhabditis elegans. Chemical investigation of the acetone extract of a C. durum culture led to the identification of monoamines and N-acetyl monoamines as major metabolites. Phenethylamine and N-acetylphenethylamine induced a potent and dose-dependent increase of the C. elegans lifespan, up to 21.6% and 19.9%, respectively. A mechanistic study revealed that the induction of SIR-2.1, a highly conserved protein associated with the regulation of lifespan, was responsible for the observed increased longevity. View Full-Text
Keywords: human microbiota; lifespan-extending activities; Corynebacterium durum; Caenorhabditis elegans; phenethylamine; N-acetylphenethylamine; SIR-2.1 human microbiota; lifespan-extending activities; Corynebacterium durum; Caenorhabditis elegans; phenethylamine; N-acetylphenethylamine; SIR-2.1
►▼ Show Figures 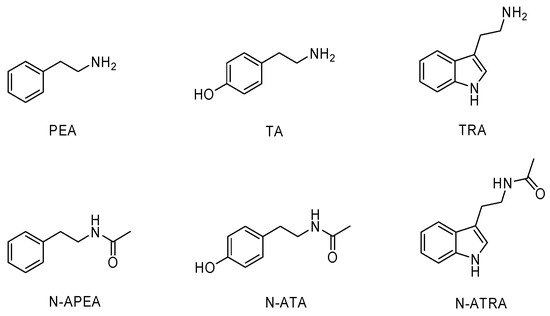