Preparing for the KIL: Receptor Analysis of Pseudomonas syringae pv. porri Phages and Their Impact on Bacterial Virulence
Previous Article in Journal

Identification and Characterization of the First Virulent Phages, Including a Novel Jumbo Virus, Infecting Ochrobactrum spp.

The Ochrobactrum genus consists of an extensive repertoire of biotechnologically valuable bacterial strains but also opportunistic pathogens. In our previous study, a novel strain, Ochrobactrum sp. POC9, which enhances biogas production in wastewater treatment plants (WWTPs) was identified and thoroughly characterized. Despite an insightful analysis of that bacterium, its susceptibility to bacteriophages present in WWTPs has not been evaluated. Using raw sewage sample from WWTP and applying the enrichment method, two virulent phages, vB_OspM_OC and vB_OspP_OH, which infect the POC9 strain, were isolated. These are the first virulent phages infecting Ochrobactrum spp. identified so far. Both phages were subjected to thorough functional and genomic analyses, which allowed classification of the vB_OspM_OC virus as a novel jumbo phage, with a genome size of over 227 kb. This phage encodes DNA methyltransferase, which mimics the specificity of cell cycle regulated CcrM methylase, a component of the epigenetic regulatory circuits in Alphaproteobacteria. In this study, an analysis of the overall diversity of Ochrobactrum-specific (pro)phages retrieved from databases and extracted in silico from bacterial genomes was also performed. Complex genome mining allowed us to build similarity networks to compare 281 Ochrobactrum-specific viruses. Analyses of the obtained networks revealed a high diversity of Ochrobactrum phages and their dissimilarity to the viruses infecting other bacteria. View Full-Text
Keywords: Ochrobactrum spp.; virulent phage; jumbo phage; comparative genomics Ochrobactrum spp.; virulent phage; jumbo phage; comparative genomics
►▼ Show Figures 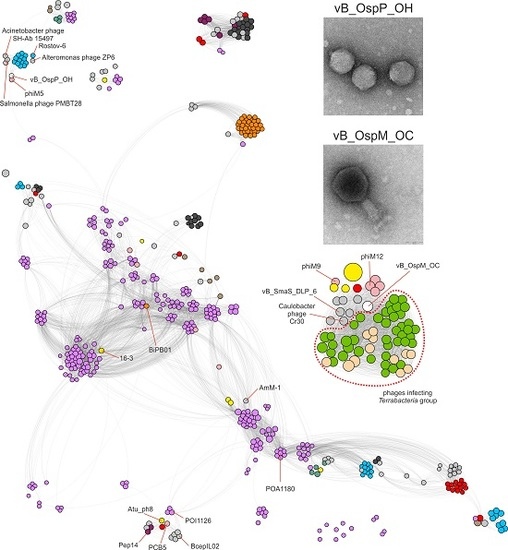