Mechanisms of Action of Cassiae Semen for Weight Management: A Computational Molecular Docking Study of Serotonin Receptor 5-HT2C
Next Article in Special Issue

Mechanism of Allium Crops Bulb Enlargement in Response to Photoperiod: A Review

The photoperiod marks a varied set of behaviors in plants, including bulbing. Bulbing is controlled by inner signals, which can be stimulated or subdued by the ecological environment. It had been broadly stated that phytohormones control the plant development, and they are considered to play a significant part in the bulb formation. The past decade has witnessed significant progress in understanding and advancement about the photoperiodic initiation of bulbing in plants. A noticeable query is to what degree the mechanisms discovered in bulb crops are also shared by other species and what other qualities are also dependent on photoperiod. The FLOWERING LOCUS T (FT) protein has a role in flowering; however, the FT genes were afterward reported to play further functions in other biological developments (e.g., bulbing). This is predominantly applicable in photoperiodic regulation, where the FT genes seem to have experienced significant development at the practical level and play a novel part in the switch of bulb formation in Alliums. The neofunctionalization of FT homologs in the photoperiodic environments detects these proteins as a new class of primary signaling mechanisms that control the growth and organogenesis in these agronomic-related species. In the present review, we report the underlying mechanisms regulating the photoperiodic-mediated bulb enlargement in Allium species. Therefore, the present review aims to systematically review the published literature on the bulbing mechanism of Allium crops in response to photoperiod. We also provide evidence showing that the bulbing transitions are controlled by phytohormones signaling and FT-like paralogues that respond to independent environmental cues (photoperiod), and we also show that an autorelay mechanism involving FT modulates the expression of the bulbing-control gene. Although a large number of studies have been conducted, several limitations and research gaps have been identified that need to be addressed in future studies. View Full-Text
Keywords: photoperiod; bulbing; phytohormones; FT gene; genotype; CO gene; allium photoperiod; bulbing; phytohormones; FT gene; genotype; CO gene; allium
►▼ Show Figures 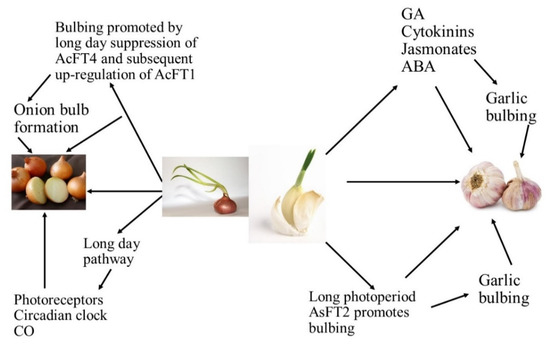