Mechanical force is a key factor for the maintenance, adaptation, and function of tendons. Investigating the impact of mechanical loading in tenocytes and tendons might provide important information on in vivo tendon mechanobiology. Therefore, the study aimed at understanding if an in vitro loading set up of tenocytes leads to similar regulations of cell shape and gene expression, as loading of the Achilles tendon in an in vivo mouse model. In vivo: The left tibiae of mice (n = 12) were subject to axial cyclic compressive loading for 3 weeks, and the Achilles tendons were harvested. The right tibiae served as the internal non-loaded control. In vitro: tenocytes were isolated from mice Achilles tendons and were loaded for 4 h or 5 days (n = 6 per group) based on the in vivo protocol. Histology showed significant differences in the cell shape between in vivo and in vitro loading. On the molecular level, quantitative real-time PCR revealed significant differences in the gene expression of collagen type I and III and of the matrix metalloproteinases (MMP). Tendon-associated markers showed a similar expression profile. This study showed that the gene expression of tendon markers was similar, whereas significant changes in the expression of extracellular matrix (ECM) related genes were detected between in vivo and in vitro loading. This first pilot study is important for understanding to which extent in vitro stimulation set-ups of tenocytes can mimic in vivo characteristics. View Full-Text
Keywords: tendon; mechanical loading; extracellular matrix; cell culture tendon; mechanical loading; extracellular matrix; cell culture
►▼ Show Figures 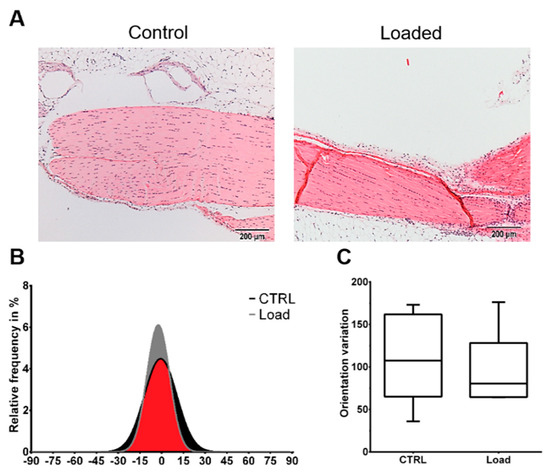