Aquaporin 1, 3, and 5 Patterns in Salivary Gland Mucoepidermoid Carcinoma: Expression in Surgical Specimens and an In Vitro Pilot Study

Chromobox homolog 2 (CBX2), a key member of the polycomb group (PcG) family, is essential for gonadal development in mammals. A functional deficiency or genetic mutation in cbx2 can lead to sex reversal in mice and humans. However, little is known about the function of cbx2 in gonadal development in fish. In this study, the cbx2 gene was identified in medaka, which is a model species for the study of gonadal development in fish. Transcription of cbx2 was abundant in the gonads, with testicular levels relatively higher than ovarian levels. In situ hybridization (ISH) revealed that cbx2 mRNA was predominately localized in spermatogonia and spermatocytes, and was also observed in oocytes at stages I, II, and III. Furthermore, cbx2 and vasa (a marker gene) were co-localized in germ cells by fluorescent in situ hybridization (FISH). After cbx2 knockdown in the gonads by RNA interference (RNAi), the sex-related genes, including sox9 and foxl2, were influenced. These results suggest that cbx2 not only plays a positive role in spermatogenesis and oogenesis but is also involved in gonadal differentiation through regulating the expression levels of sex-related genes in fish. View Full-Text
Keywords: cbx2; gonadal development; medaka cbx2; gonadal development; medaka
►▼ Show Figures 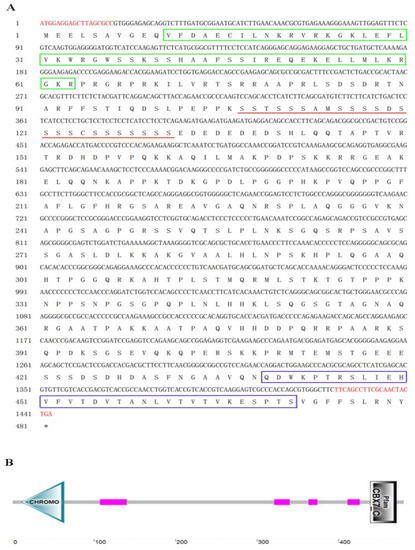