PPP2R5D-Related Intellectual Disability and Neurodevelopmental Delay: A Review of the Current Understanding of the Genetics and Biochemical Basis of the Disorder
Previous Article in Special Issue

Dynamics of Salivary Gland AQP5 under Normal and Pathologic Conditions

Article
Aquaporin 1, 3, and 5 Patterns in Salivary Gland Mucoepidermoid Carcinoma: Expression in Surgical Specimens and an In Vitro Pilot Study
by

:
Salivary gland aquaporins (AQPs) are essential for the control of saliva production and maintenance of glandular structure. However, little is known of their role in salivary gland neoplasia. Salivary gland tumors comprise a heterogeneous group of lesions, featuring variable histological characteristics and diverse clinical behaviors. Mucoepidermoid carcinoma (MEC) is the most common salivary gland malignancy. The aim of this study was to evaluate the expression of AQP1, AQP3, and AQP5 in 24 MEC samples by immunohistochemistry. AQP1 expression was observed in vascular endothelium throughout the tumor stroma. AQP3 was expressed in epidermoid and mucosal cells and AQP5 was expressed in mucosal cells of MEC. These proteins were expressed in the human MEC cell line UH-HMC-3A. Cellular ultrastructural aspects were analyzed by electron microscopy to certificate the tumor cell phenotype. In summary, our results show that, despite the fact that these molecules are important for salivary gland physiology, they may not play a distinct role in tumorigenesis in MEC. Additionally, the in vitro model may offer new possibilities to further investigate mechanisms of these molecules in tumor biology and their real significance in prognosis and possible target therapies.
Keywords:
aquaporins; mucoepidermoid carcinoma; immunohistochemistry; immunofluorescence; electron microscopy

Aquaporins (AQPs) are integral membrane proteins that form channels that facilitate water and solute transport [1,2,3,4]. Due to their role as water channel structures, they are essential in the physiology of salivary glands and saliva production [5,6]. Several studies have suggested that AQPs may be involved in processes such as cellular migration, angiogenesis, organ regeneration, wound healing, and tumorigenesis [2,4,6,7,8,9,10,11,12].
Altered expression of AQPs has been observed in multiple tumors. Some authors have associated AQP expression with tumor grade, angiogenesis, and tumor-associated edema. However, the molecular mechanisms of AQP function in tumors are unclear because both overexpression and underexpression of these proteins have been related to poor prognoses of adenocarcinomas of many organs such as lung, pancreas, stomach, liver, and colon, among others [2,8,9,10,11,12,13,14,15,16,17,18]. A few studies have also evaluated the expression of AQPs in the development and progression of salivary gland tumors, with special attention given to AQP3 and AQP5, because they are the predominant AQPs of normal salivary gland tissue. These studies were primarily descriptive and did not explore potential associations between AQPs and clinical outcomes or histopathology [15,16].
Mucoepidermoid carcinoma (MEC) is the most common malignancy of the salivary gland. Histologic grade and anatomic site have prognostic and therapeutic relevance, and metastasis is an indicator of poor prognosis [19,20,21,22,23]. Thus, the identification of an expression profile of AQPs in MEC and its association with clinical and pathological features could not only provide a better understanding of the molecular basis of these lesions but might also identify prognostic biomarkers. The aim of our study was to investigate the expression of AQP1, AQP3, and AQP5 in MEC and to associate their expression with patient demographic, clinical, and pathological characteristics.

AQPs were expressed in MEC samples (Figure 1, Table 1). They were observed on cell membranes of neoplastic cells, normal salivary gland tissue, and positive controls. AQP1 was absent in the parenchymas but expressed in vascular endothelia of both MEC and normal tissue. AQP3 was expressed on the membranes of epidermoid and mucosal cells of MEC, and in myoepithelial and ductal cells of normal salivary glands. AQP5 was expressed on the membranes of mucous cells of MEC and in acinar structures of normal salivary glands.
The ultrastructural aspects of UM-HMC-3A featured epithelial cells with abundant cytoplasm, electron-dense vacuoles, and delicate cell membrane villi (Figure 2A,B). AQP expression was also evaluated in MEC cell line UM-HMC-3A, and disclosed membrane positivity for AQP1, AQP3, and, in some cells, for AQP5 (Figure 3).
Statistical analysis of AQP1 expression was not performed because of its absence in MEC tumor cells. There were no significant correlations of AQP3 and AQP5 expression to demographic, clinical, or pathological characteristics. Increased five-year survival rates were observed in patients with either AQP3-negative (Figure 4) or AQP5-positive (Figure 5) tumors. However, these associations did not reach statistical significance.

Paraffin-embedded tissue samples from 24 MEC patients were retrieved from the archives of the Department of Pathology, A.C.Camargo Cancer Center, São Paulo, Brazil. All cases were treated at the hospital for at least 5 years. The demographic, clinical and histological details of all cases are provided in Table 2. The study was conducted in accordance with the Declaration of Helsinki and the need for informed consent was waived as the human specimens were deidentified. The protocol was approved on 19 September 2017 by the Ethics Committee of the A.C.Camargo Cancer Center (Protocol number 2433/17).

The expression of AQP1, AQP3, and AQP5 was examined in the salivary gland tissue samples. The slides were deparaffinized, rehydrated, and subjected to antigen retrieval. Details of the antigen retrieval methods and the primary antibody clones, sources, and titers are listed in Table 3. The sections were incubated in 3% aqueous hydrogen peroxide for 15 min to quench endogenous peroxidase activity, and with Protein Block (Dako, Carpinteria, CA, USA) for 30 min at room temperature to eliminate non-specific binding of subsequent reagents.
The tissue sections were incubated with the primary antibodies for 16 h at 4 °C. The antigen-antibody complexes were visualized using the Advance detection system (Dako, Carpinteria, CA, USA) and incubated with 3′3 diaminobenzidine tetrachloride (DAB) (Dako, Carpinteria, CA, USA) for 5 min. The sections were then counterstained with Mayer’s hematoxylin (Merck, Darmstadt, Germany), dehydrated, and mounted with a glass coverslip and xylene-based mounting media. Positive controls were used per the manufacturer’s instructions.
Qualitative analysis was performed using a conventional optical microscope using scores based on the percentage of stained cells and staining intensity: 0, negative staining (up to 10% of cells stained and only visible at 40×); 1, positive staining (more than 10% of cells stained and easily detectable at 10×). Additionally, the positivity was considered according to the stained structures—mucous cells, intermediate cells, squamous cells, and vasculature.

The UM-HMC-3A cells were plated on a 25 cm2 flask at a density of 3 × 106 and incubated at 37 °C in a humidified 5% CO2 atmosphere for 48 h. After this period, the cultured cells were scraped from the flask and centrifuged at 1000 rpm for 10 min. The pellet of cells was then fixed in 2% glutaraldehyde, washed in PBS, and post-fixed in 1% osmium tetroxide. After stepwise dehydration with ethanol (70–100%), the cells were embedded in Spurr resin, and ultrathin sectioning was performed (800–1000 Å) using an ultratome (LKB U-5 Ultratome, LKB, Sollentuna, Sweden). The cells were stained with 4% uranyl acetate and then with Reynolds lead citrate. The grids were studied and micrographed with a Philips TEM 400 transmission electron microscope, operating at 80 kV.

The association between qualitative variables was evaluated by chi-squared or Fisher’s exact test as appropriate. The nonparametric Mann–Whitney or Kruskal–Wallis tests were used for the comparison of quantitative variables.
Survival curves were estimated using the Kaplan–Meier method, and the comparison between the curves was evaluated by the log-rank test. The significance level was 5% for all tests. Statistical analyses were performed using SPSS software (Version 25). 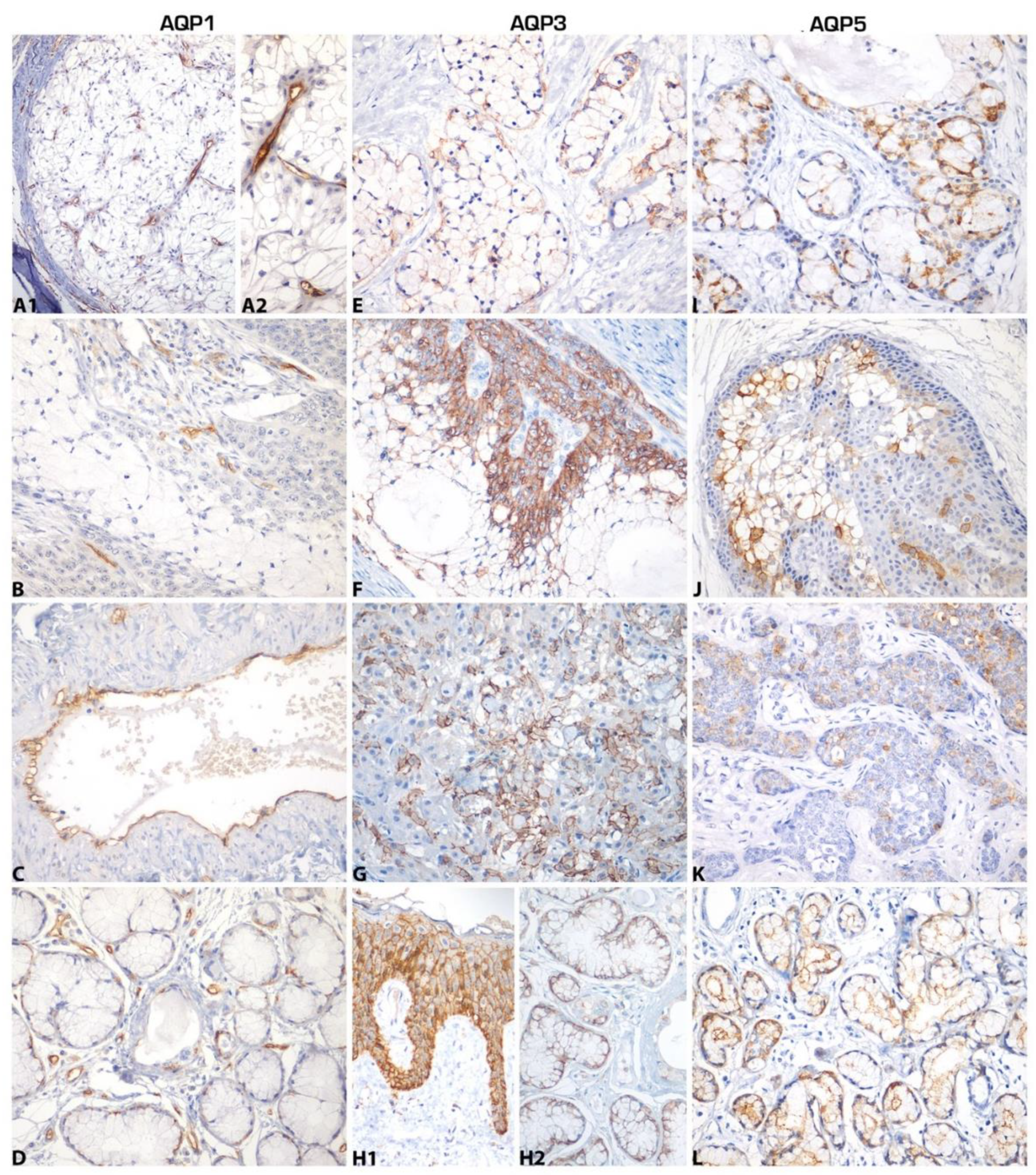 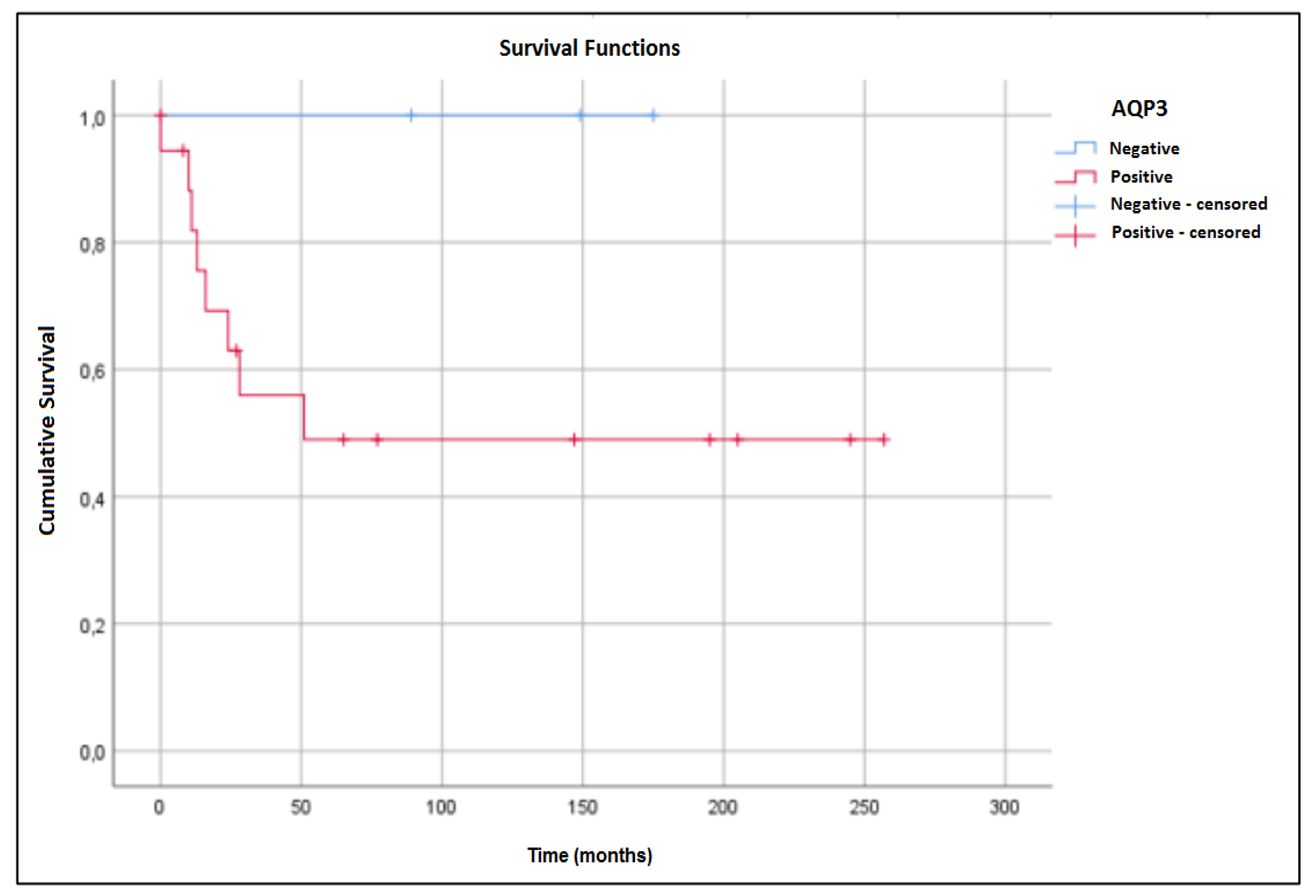