Genome-Wide Profiling and Phylogenetic Analysis of the SWEET Sugar Transporter Gene Family in Walnut and Their Lack of Responsiveness to Xanthomonas arboricola pv. juglandis Infection
Next Article in Special Issue

Metabolomics to Improve the Diagnostic Efficiency of Inborn Errors of Metabolism

Rapid lifestyle and dietary changes have contributed to a rise in the global prevalence of metabolic syndrome (MetS), which presents a potential healthcare crisis, owing to its association with an increased burden of multiple cardiovascular and neurological diseases. Prior work has identified the role that genetic, lifestyle, and environmental factors can play in the prevalence of MetS. Metabolomics is an important tool to study alterations in biochemical pathways intrinsic to the pathophysiology of MetS. We undertook a metabolomic study of MetS in serum samples from two ethnically distinct, well-characterized cohorts—the Baltimore Longitudinal Study of Aging (BLSA) from the U.S. and the Tsuruoka Metabolomics Cohort Study (TMCS) from Japan. We used multivariate logistic regression to identify metabolites that were associated with MetS in both cohorts. Among the top 25 most significant (lowest p-value) metabolite associations with MetS in each cohort, we identified 18 metabolites that were shared between TMCS and BLSA, the majority of which were classified as amino acids. These associations implicate multiple biochemical pathways in MetS, including branched-chain amino acid metabolism, glutathione production, aromatic amino acid metabolism, gluconeogenesis, and the tricarboxylic acid cycle. Our results suggest that fundamental alterations in amino acid metabolism may be central features of MetS. View Full-Text
Keywords: metabolic syndrome; metabolomics; amino acids; fasting glucose; triglycerides; waist circumference; blood pressure metabolic syndrome; metabolomics; amino acids; fasting glucose; triglycerides; waist circumference; blood pressure
►▼ Show Figures 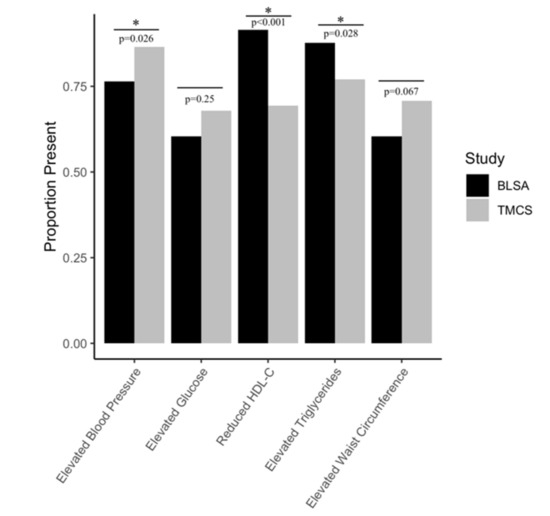