Genetic Base of Behavioral Disorders in Mucopolysaccharidoses: Transcriptomic Studies
Previous Article in Journal

A Case Report of a Japanese Boy with Morquio A Syndrome: Effects of Enzyme Replacement Therapy Initiated at the Age of 24 Months

Background: Morquio A syndrome, mucopolysaccharidosis type IVA (MPS IVA), is a lysosomal storage disorder caused by the deficient activity of N-acetylgalactosamine-6-sulfatase (GalNac6S), due to alterations in the GALNS gene. This disorder results in marked abnormalities in bones and connective tissues, and affects multiple organs. Here, we describe the clinical course of a Japanese boy with MPS IVA who began enzyme replacement therapy (ERT) at the age of 24 months. Patient: the patient presented for kyphosis treatment at 22 months of age. An X-ray examination revealed dysostosis multiplex. Uronic acids were elevated in the urine and the keratan sulfate (KS) fraction was predominant. The leukocyte GalNac6S enzyme activity was extremely low. The patient exhibited the c.463G > A (p.Gly155Arg) mutation in GALNS. Based on these findings, his disease was diagnosed as classical (severe) Morquio A syndrome. An elosulfase alfa infusion was initiated at the age of 24 months. The patient’s body height improved from −2.5 standard deviation (SD) to −2 SD and his physical activity increased during the first 9 months on ERT. However, he gradually developed paralysis in the lower legs with declining growth velocity, which required cervical decompression surgery in the second year of the ERT. The mild mitral regurgitation, serous otitis media, and mild hearing loss did not progress during treatment. Conclusion: early initiation of the elosulfase alfa to our patient showed good effects on the visceral system and muscle strength, while its effect on bones appeared limited. Careful observation is necessary to ensure timely surgical intervention for skeletal disorders associated with neurological symptoms. Centralized and multidisciplinary management is essential to improve the prognosis of pediatric patients with MPS IVA. View Full-Text
Keywords: Morquio A syndrome; mucopolysaccharidosis type IVA; elosulfase alfa; enzyme replacement therapy; growth; spinal decompression surgery Morquio A syndrome; mucopolysaccharidosis type IVA; elosulfase alfa; enzyme replacement therapy; growth; spinal decompression surgery
►▼ Show Figures 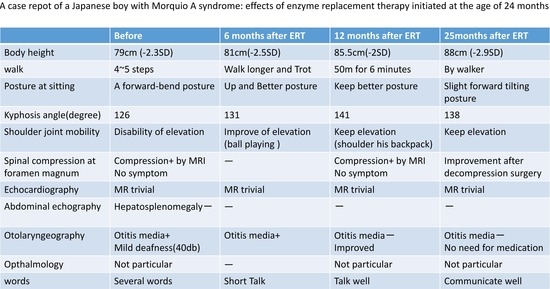