T Cell Subpopulations in the Physiopathology of Fibromyalgia: Evidence and Perspectives
Previous Article in Journal

Myalgic encephalomyelitis/chronic fatigue syndrome (ME/CFS) is a devastating illness whose biomedical basis is now beginning to be elucidated. We reported previously that, after recovery from frozen storage, lymphocytes (peripheral blood mononuclear cells, PBMCs) from ME/CFS patients die faster in culture medium than those from healthy controls. We also found that lymphoblastoid cell lines (lymphoblasts) derived from these PBMCs exhibit multiple abnormalities in mitochondrial respiratory function and signalling activity by the cellular stress-sensing kinase Target Of Rapamycin Complex 1 (TORC1). These differences were correlated with disease severity, as measured by the Richardson and Lidbury weighted standing test. The clarity of the differences between these cells derived from ME/CFS patient blood and those from healthy controls suggested that they may provide useful biomarkers for ME/CFS. Here, we report a preliminary investigation into that possibility using a variety of analytical classification tools, including linear discriminant analysis, logistic regression and receiver operating characteristic (ROC) curve analysis. We found that results from three different tests—lymphocyte death rate, mitochondrial respiratory function and TORC1 activity—could each individually serve as a biomarker with better than 90% sensitivity but only modest specificity vís a vís healthy controls. However, in combination, they provided a cell-based biomarker with sensitivity and specificity approaching 100% in our sample. This level of sensitivity and specificity was almost equalled by a suggested protocol in which the frozen lymphocyte death rate was used as a highly sensitive test to triage positive samples to the more time consuming and expensive tests measuring lymphoblast respiratory function and TORC1 activity. This protocol provides a promising biomarker that could assist in more rapid and accurate diagnosis of ME/CFS. View Full-Text
Keywords: myalgic encephalomyelitis; chronic fatigue syndrome; mitochondria; complex V; TORC1; Seahorse respirometry; biomarker; diagnosis; ME/CFS myalgic encephalomyelitis; chronic fatigue syndrome; mitochondria; complex V; TORC1; Seahorse respirometry; biomarker; diagnosis; ME/CFS
►▼ Show Figures 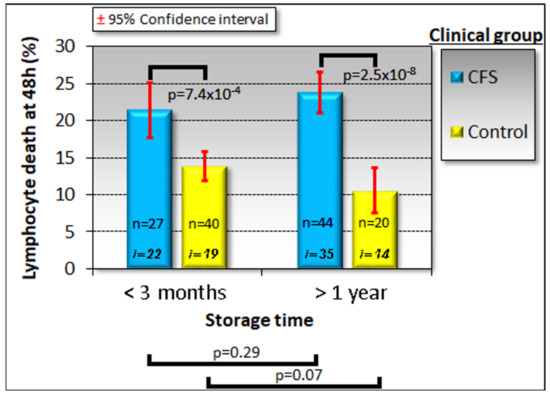