Staying out or Going in? The Interplay between Type 3 and Type 5 Secretion Systems in Adhesion and Invasion of Enterobacterial Pathogens

Microcystins (MCs) are cyanobacterial toxins and potent inhibitors of protein phosphatases 1 (PP1) and 2A (PP2A), which are involved in plant cytoskeleton (microtubules and F-actin) organization. Therefore, studies on the toxicity of cyanobacterial products on plant cells have so far been focused on MCs. In this study, we investigated the effects of extracts from 16 (4 MC-producing and 12 non-MC-producing) cyanobacterial strains from several habitats, on various enzymes (PP1, trypsin, elastase), on the plant cytoskeleton and H2O2 levels in Oryza sativa (rice) root cells. Seedling roots were treated for various time periods (1, 12, and 24 h) with aqueous cyanobacterial extracts and underwent either immunostaining for α-tubulin or staining of F-actin with fluorescent phalloidin. 2,7-dichlorofluorescein diacetate (DCF-DA) staining was performed for H2O2 imaging. The enzyme assays confirmed the bioactivity of the extracts of not only MC-rich (MC+), but also MC-devoid (MC−) extracts, which induced major time-dependent alterations on both components of the plant cytoskeleton. These findings suggest that a broad spectrum of bioactive cyanobacterial compounds, apart from MCs or other known cyanotoxins (such as cylindrospermopsin), can affect plants by disrupting the cytoskeleton. View Full-Text
Keywords: bioactive compounds; cyanobacteria; cytoskeleton; F-actin; microcystins; microtubules; Oryza sativa; oxidative stress; plant cell bioactive compounds; cyanobacteria; cytoskeleton; F-actin; microcystins; microtubules; Oryza sativa; oxidative stress; plant cell
►▼ Show Figures 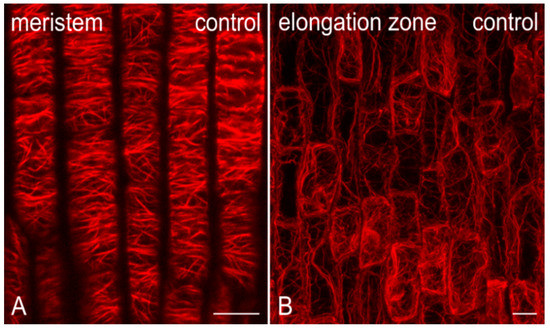