The Role of Age, Neutrophil Infiltration and Antibiotics Timing in the Severity of Streptococcus pneumoniae Pneumonia. Insights from a Multi-Level Mathematical Model Approach
Previous Article in Special Issue

Advanced Medical Therapies in the Management of Non-Scarring Alopecia: Areata and Androgenic Alopecia

Rosacea is a common chronic immune-mediated inflammatory cutaneous disorder with an estimated prevalence of about 0.91–8.5% [1]. Clinically, it is characterized by chronic recurrent episodes of flushing and persistent erythema of the central face. Phymatous change, flushing, papulopustules, and telangiectasia are commonly observed cutaneous signs of rosacea. Moreover, a variety of combinations and degrees of clinical signs and symptoms of rosacea can be observed in each individual [1].
Although the exact pathogenesis of rosacea needs further elucidation, the development of the clinical manifestations of rosacea can be explained by multifactorial etiologies, including genetic predisposition, epidermal barrier disruption, dysregulation of the innate and adaptive immune system, neuroinflammation, and neurovascular dysregulation [2]. The complex pathophysiology of rosacea suggests that it is not limited to the skin but could also be associated with multiple systemic disorders. To date, several epidemiological studies have also identified the possible association between rosacea and various comorbid disorders. Specifically, the association between cardiovascular disorders, such as hypertension and coronary artery disease, and rosacea, has been confirmed in previous studies [3,4]. However, some inconsistencies in the association between rosacea and other comorbidities still exist. Therefore, this study was intended to review the most up-to-date epidemiological evidence to more clearly assess the risk of comorbid diseases in rosacea. Among a variety of comorbidities of rosacea, this study was intended to focus more on identifying the association of neurologic disorders, psychiatric disorders, gastrointestinal disorders, and rosacea. To clarify this, we further assessed the possible shared pathophysiological mechanisms of rosacea and its comorbid disorders. As a gut–brain–skin axis model has been suggested for several decades [5], and recent progress in microbiome research has solidified this hypothesis about the effect of the gut–brain–skin axis in cutaneous disorders, this review also investigated a potential association between the gut–brain–skin axis and the comorbidities of rosacea. Identifying the real burden of comorbidities in patients with rosacea might help provide a multidisciplinary approach to the patient and serve as a bridge to the unknown etiological pathogenesis of rosacea.

2. The Risk of Neurologic Diseases in Rosacea

3. The Risk of Psychiatric Diseases in Rosacea

Due to the chronic nature of rosacea and facial presentation of the disease, patients with rosacea suffer from poor psychological well-being [42]. Psychological aggravating factors such as stress, anxiety, immature personality with excessive feelings of shame and guilt, and social anxiety secondary to easy blushing could worsen the flushing in patients with rosacea and be a factor involved in the vicious cycle of rosacea [12,42]. Facial erythema, which is the characteristic clinical feature of rosacea, results in more impaired health-related quality of life in patients with rosacea than its inflammatory lesions [43]. A recent study by Wu et al. [44] also found that patients with rosacea showed increased dermatology life quality index scores and hospital anxiety and depression scale scores than controls, suggesting the significant negative psychological impact of rosacea on the Chinese patients in the study. The increased psychosocial burden associated with rosacea has caused many researchers to analyze the risk of psychiatric comorbid disease in rosacea. Table 1 summarizes recent nationwide population-based cohort and case–control studies analyzing the risk of different psychiatric disorders in patients with rosacea.
A case–control study conducted in the United States reported that patients with rosacea had an increased risk of depressive disease (OR: 4.81; 95% CI: 1.39–16.62) compared with the controls [12]. In a nationwide study conducted in a Danish population, Egeberg et al. [13] also found that the patients with both mild and moderate to severe rosacea showed an increased risk of depression (mild rosacea, IRR: 1.89; 95% CI: 1.82–1.96; moderate to severe rosacea, IRR: 2.04; 95% CI: 1.96–2.12). A more recent study found that patients with rosacea had an increased risk of overall psychiatric disorders (adjusted hazard ratio (aHR): 2.76, 95% CI: 2.65–2.87) after adjusting for age, sex, comorbidity, and residence [14]. Among a variety of psychiatric disorders, the highest risk of psychiatric comorbidities was for phobic disorder (aHR: 7.84; 95% CI: 7.52–8.17) followed by obsessive-compulsive disorder (aHR: 6.38; 95% CI: 6.13–6.65), major depressive disorder (aHR: 3.78; 95% CI: 3.63–3.94), bipolar disorder (aHR: 3.06; 95% CI: 3.06–3.32), and anxiety (aHR: 2.91; 95% CI: 2.79–3.03) [14]. The increased risk of anxiety disorder was proposed in a study by Incel Uysal et al. [45]. Female patients with rosacea showed a higher risk of having generalized anxiety disorder (OR: 2.8; 95% CI: 1.15–7.37) than males [45]. The study examined a US national inpatients sample and found that patients diagnosed with rosacea showed increased odds (OR: 1.70; 95% CI: 1.56–1.95) of a primary admission for mental health disorders [46]. Treatment for rosacea, particularly for blushing, might help improve depressive symptoms and social anxiety [47]. Similarly, the effective management of rosacea symptoms results in a significant improvement in health-related quality of life.
The plausible explanation for this association could be abnormalities in the gut–brain axis and its shared inflammatory pathways. Altered gastrointestinal microbiota was also frequently observed in psychological disorders including depression and anxiety disorders [48,49,50]. Psychological stressors are known to induce the production of various neurotransmitters or the release of neuropeptides from nearby enteroendocrine cells [51]. This could increase the permeability of the intestine and consequently cause intestinal and systemic inflammation. Indeed, an increased prevalence of infection with Helicobacter pylori (H. pylori) and small intestinal bacterial overgrowth and abnormalities in skin microbiota were observed in patients with rosacea [48,52,53]. Based on these findings, we can suppose a possible association between rosacea and psychiatric disorders via the gut–brain–skin axis [14,54]. IL-17 has been implicated as a key cytokine in central nervous system diseases and mediates psychiatric disorders. Indeed, Th17 cells are increased in the blood of patients with depression and promote depression-like behaviors in mice. Similarly, IL-17 plays an important role in the development and aggravation of rosacea [55]. However, when compared with other chronic cutaneous skin diseases including acne, atopic dermatitis, and psoriasis, the psychosocial aspects of rosacea have been underestimated and further research is needed to properly assess the risk of psychological burden in patients with rosacea.

4. The Risk of Gastrointestinal Disorders in Rosacea

Rosacea is considered a chronic recurrent systemic inflammatory disorder. Several studies have analyzed the risk of comorbidities in rosacea. The knowledge presented in this review suggests the existence of links between rosacea and various neurologic disorders, psychiatric disorders, and gastrointestinal disorders.
A growing body of evidence has reported the pathogenic factors of rosacea. The interplay of factors such as genetic predisposition, triggering factors, immune alterations, neuroinflammation, and neurovascular dysregulation has been suggested to play a pivotal role in the pathophysiology of rosacea. The possible association of diverse comorbidities in rosacea could also be explained by the shared pathogenic pathways and molecules involved both in comorbid disorders and rosacea.
Some triggering factors such as stress and diet are considered to have a major role in the exacerbation of rosacea. For example, alcoholic beverages, spicy food, hot drinks, and chocolate are well-known dietary triggers of rosacea. Diet has a substantial impact on the regulation of the human microbiome [72] and dysbiosis in the intestine has a negative impact on skin function. Metabolites of the microbiota could accumulate in the skin and thereafter damage the integrity of the skin barrier and promote further inflammation. Whether microbiota could be considered causative agents or innocent bystanders in the development of rosacea needs further elucidation [80]. Studies have supported the concept of imbalances in the diverse microbiota in the skin and gut of patients with rosacea. Moreover, as the skin and gut both have neuroendocrine pathways, this could also affect the function of the brain. The association with the gut–brain axis has also been established via multiple parallel pathways between them, including the autonomic nervous system and the pituitary–hypothalamus–adrenal axis [81]. The proposed role of the gut–brain–skin axis in rosacea is depicted in Figure 2.
The findings from this study present the concept of the involvement of the gut–brain–skin axis in rosacea. While diverse studies support this association, further experimental studies are needed to more clearly identify the exact pathophysicological mechanisms of this axis and its association with rosacea pathogenesis. In clinical practice, it is necessary to manage the stress of patients with rosacea and to strictly control the intake of some foods that can lead to the imbalance of the gut–brain–skin axis in rosacea. In addition, probiotic supplementation in patients with rosacea might help in improvement of the gut environment. As antibiotic treatment resulted in the improvement of some neurologic and gastrointestinal disorders, which were also associated with rosacea, we suspect that antibiotic therapy could be a promising option in controlling the altered gut–brain–skin axis of patients with rosacea.
In addition to the abovementioned comorbidities, further identification of comorbidities in patients with rosacea is needed in the future. The risk factors of each comorbidity in patients with rosacea also need to be further explored. Further, as increased risks of comorbidities are frequently observed in patients with rosacea, clinicians should always examine the possible presence of comorbidities in patients with rosacea to provide a multidisciplinary approach to treating the comorbidities. 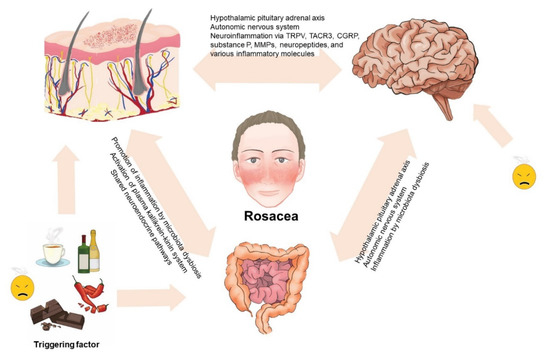