Advanced Methods for Studying Structure and Interactions of Macrolide Antibiotics

:
Macrolide antibiotics are macrocyclic compounds that are clinically used and prescribed for the treatment of upper and lower respiratory tract infections. They inhibit the synthesis of bacterial proteins by reversible binding to the 23S rRNA at or near the peptidyl transferase center. However, their excellent antibacterial profile was largely compromised by the emergence of bacterial resistance. Today, fighting resistance to antibiotics is one of the greatest challenges in medicinal chemistry. Considering various physicochemical properties of macrolides, understanding their structure and interactions with macromolecular targets is crucial for the design of new antibiotics efficient against resistant pathogens. The solid-state structures of some macrolide-ribosome complexes have recently been solved, throwing new light on the macrolide binding mechanisms. On the other hand, a combination of NMR spectroscopy and molecular modeling calculations can be applied to study free and bound conformations in solution. In this article, a description of advanced physicochemical methods for elucidating the structure and interactions of macrolide antibiotics in solid state and solution will be provided, and their principal advantages and drawbacks will be discussed.
Keywords:
structure characterization; macrolide antibiotics; macrolide interactions; biomolecular targets; X-ray crystallography; cryo-electron microscopy; NMR spectroscopy; biochemical and fluorescence methods; molecular dynamics simulations 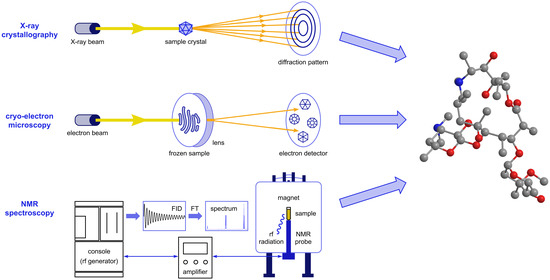 5. Other Methods for Macrolide Binding Studies

Biochemical and physicochemical assays provide interesting alternatives for X-ray, cryo-EM, and NMR methods, as they do not require a complete structure characterization of ligands, receptors, or their complexes and offer a fast and efficient way to confirm binding, identify the binding site, and assess how the complex formation affects biomolecular structure and function. There are three major groups of commonly used assays for macrolide interaction studies.
The first group is based on footprinting experiments, which allow a quick and reliable assessment of macrolide binding sites [86]. In the footprinting assay, a modification agent is introduced in vitro into the mixture of ribosome and macrolide solutions (Figure 8a). After nucleotide modification, the rRNA is extracted and the positions of modification are identified by using primer extension and gel electrophoresis. Macrolide binding protects a part of the rRNA from the modification, revealing a footprint in the electropherogram of a modified complex. Several research papers published in the last decade consider the use of footprinting as the principal method for describing the interactions of macrolide antibiotics with bacterial ribosomes [87,88,89]. Xiong et al. characterized the binding site of 6,11-O-bridged macrolide derivatives at the E. coli ribosome by identifying their footprints after the treatment with dimethyl sulfate (DMS), which methylates the nitrogen atoms N1 in adenine and N3 in cytosine and with 1-cyclohexyl-3-(2-morpholinoethyl) carbodiimide metho-p-toluene sulfonate (CMCT), which modifies guanine and uracil residues at positions N1 and N3, respectively [87]. The results were comparable with competition binding experiments and indicated that the bridged derivatives and erythromycin interacted with the same or overlapping sites at the E. coli ribosome. Similarly, Poulsen et al. utilized the footprinting assay to study interactions of pleuromutilins and macrolides with the E. coli ribosome [88]. It was demonstrated that pleuromutilin derivatives and carbomycin competed for an overlapping binding site at the ribosome, while erythromycin targeted another region.
An interesting approach was used by Petropoulos et al., who combined footprinting and kinetic experiments to describe the entire course of azithromycin binding to the E. coli ribosome and to explore the effects of magnesium ions and polyamines on the reaction mechanism [89]. Kinetic data pointed toward a two-step binding process: azithromycin was first recognized by the ribosome machinery and placed in a low-affinity site within the upper part of the exiting tunnel, followed by the slow formation of a final complex. Furthermore, mutual exclusion between the low- and high-affinity sites at the E. coli ribosome prevented the simultaneous binding of two azithromycin molecules. That observation was in sharp contrast to the results obtained for D. radiodurans, where two cooperatively interacting sites for azithromycin existed in the ribosome. A high concentration of Mg2+ hindered drug binding to both sites, while polyamines blocked the shift of azithromycin to the high-affinity site and attenuated the complex formation.
In the toeprinting analysis, primer extension and gel electrophoresis are applied to measure the ribosome position on the mRNA [90]. If macrolide binding triggers translational inhibition, a specific band in the electropherogram (toeprint) is shifted from the toeprint of a ribosome at the stop codon, pointing toward the stalling position (Figure 8b). Toeprinting experiments can generally be used if the complex is stable enough to withstand displacement by reverse transcriptase during the primer extension. Representative examples are the stalled ribosome complexes with macrolides and nascent peptides mentioned in the previous section. Ribosome stalling at the ErmCL peptide was studied by the group of Vázquez-Laslop, who used a combination of toeprinting, selective amino acid labeling, and mutational analyses to assess the contribution of ErmCL, erythromycin, and the bacterial ribosome toward the formation of the stalled complex [55]. Toeprinting showed that stalling occurred at the Ile9 codon, which was further confirmed by selective amino acid labeling. Mutational analysis revealed that universally conserved residues of the 23S rRNA play crucial roles in the stalling mechanism. In their recently published paper [91], Koch et al. corroborated these results by toeprinting and atomic mutagenesis assays, highlighting A2062, A2053, and U2586 (E. coli nomenclature) as the key players in the ErmCL-mediated translational arrest. A similar methodology was applied by Sothiselvam et al., who explored how macrolides affect the binding of nascent peptides to different acceptor substrates at the ribosome [92]. They carried out mutational and toeprinting analysis and suggested that the binding of erythromycin in the exiting tunnel blocked the transfer of nascent tripeptides with an Arg or Lys as their penultimate residues to an Arg or Lys acceptor. The authors found that macrolide-induced translational arrest was affected by the length of amino acid side chains in the donor and acceptor substrates and the positive charge of critical residues.
An alternative approach to study macrolide interactions involves selective labeling of the ribosome or antibiotic with a suitable fluorophore (F) and subsequent fluorescence detection of the complex (Figure 8c). Johansson et al. have shown that fluorometric analysis can successfully be employed to monitor the elongation dynamics and the effect of erythromycin on ErmCL-mediated stalling [93]. For this purpose, they applied an assay based on Förster resonance energy transfer (FRET), which was induced by mutual rotation of the small and large subunits labeled with fluorescent donor (Cy3 or Cy3B) and acceptor (Cy5) dyes, respectively. Real-time tracking of the elongation stage facilitated explanation of the stalling mechanism. The authors emphasized that erythromycin binding triggered an abrupt ribosome stalling, in contrast to the gradual slowdown and heterogeneous stall positions observed in the macrolide-independent process. Complementary information on the binding dynamics can be obtained by fluorescent labeling of the drug. Tereshchenkov et al. prepared a series of fluorescent macrolide derivatives and calculated the dissociation constants for their ribosomal complexes from the fluorescence polarization data [94]. It was found that certain tylosin derivatives with fluorescent groups could be used as probes to characterize the binding of new macrolides and other drugs to the exiting tunnel. However, these results should be interpreted with caution, having in mind that the binding affinity and inhibitory activity of macrolides may differ from their fluorescent derivatives.

The advanced experimental and computational methods reviewed in this paper have successfully been applied to study the structure and interactions of macrolide antibiotics with their biological targets. It has been shown that the solution-state structures of macrolides, their receptors, and complexes are very similar to those observed in the crystalline state. However, the structural features may not exactly be the same in crystals and at or near physiological conditions, which has been elaborated. The presented structural models revealed that macrolide-ribosome interactions are species-specific, although the structural architecture of the complexes showed similarities. It is important to obtain structures with the highest resolution possible to elucidate all relevant structural details of the interactions. Another fact that should not be neglected is the conformational differences between macrolide complexes with the whole ribosome and with the large subunit alone, as observed for erythromycin by cryo-EM. Having this in mind, a complete insight into the mechanisms of complex formation can only be obtained by combining X-ray, cryo-EM, and NMR methods with MD simulations, biochemical and physicochemical assays. This is crucial for further research aiming at the design of new inhibitors and drugs. 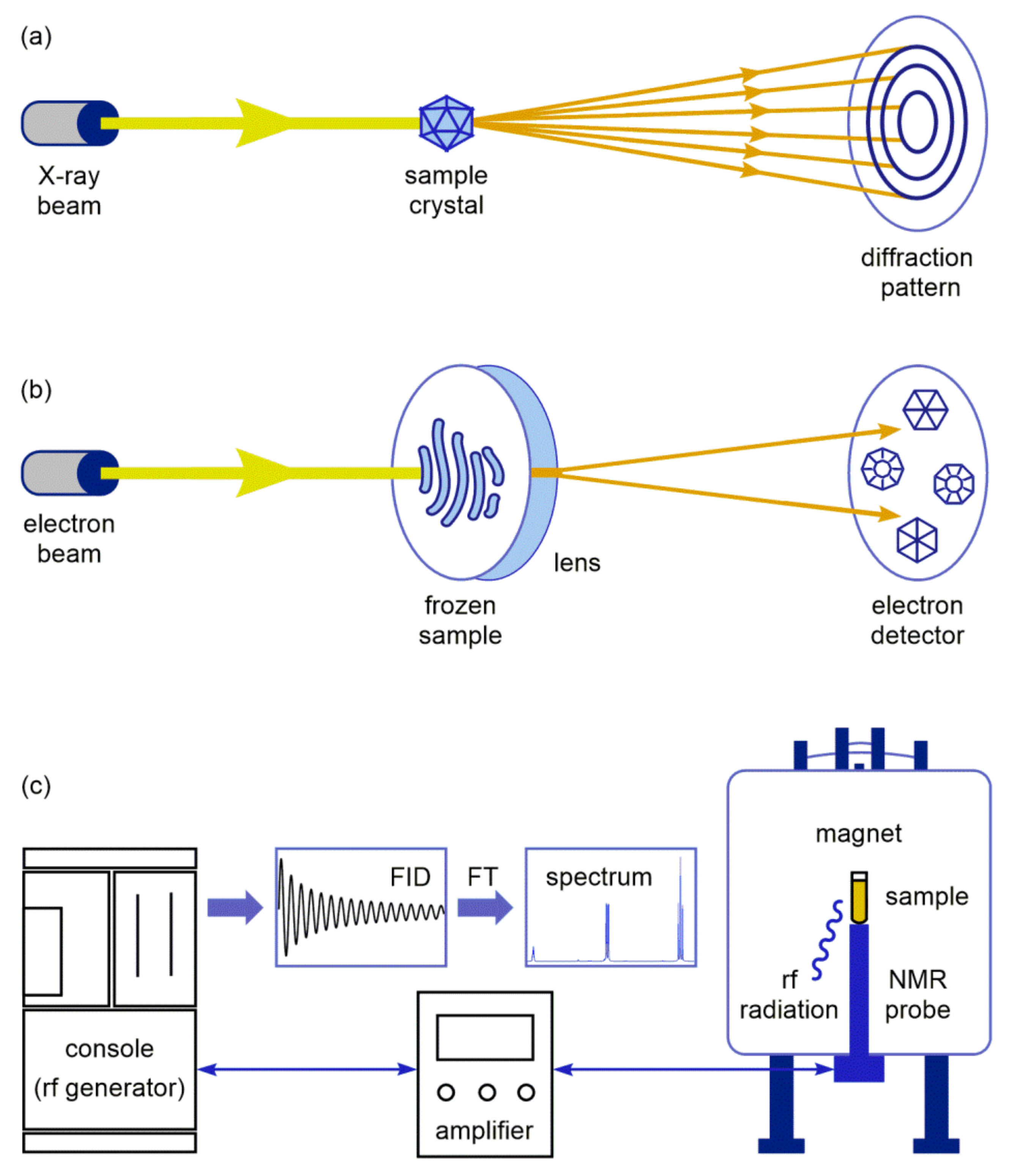 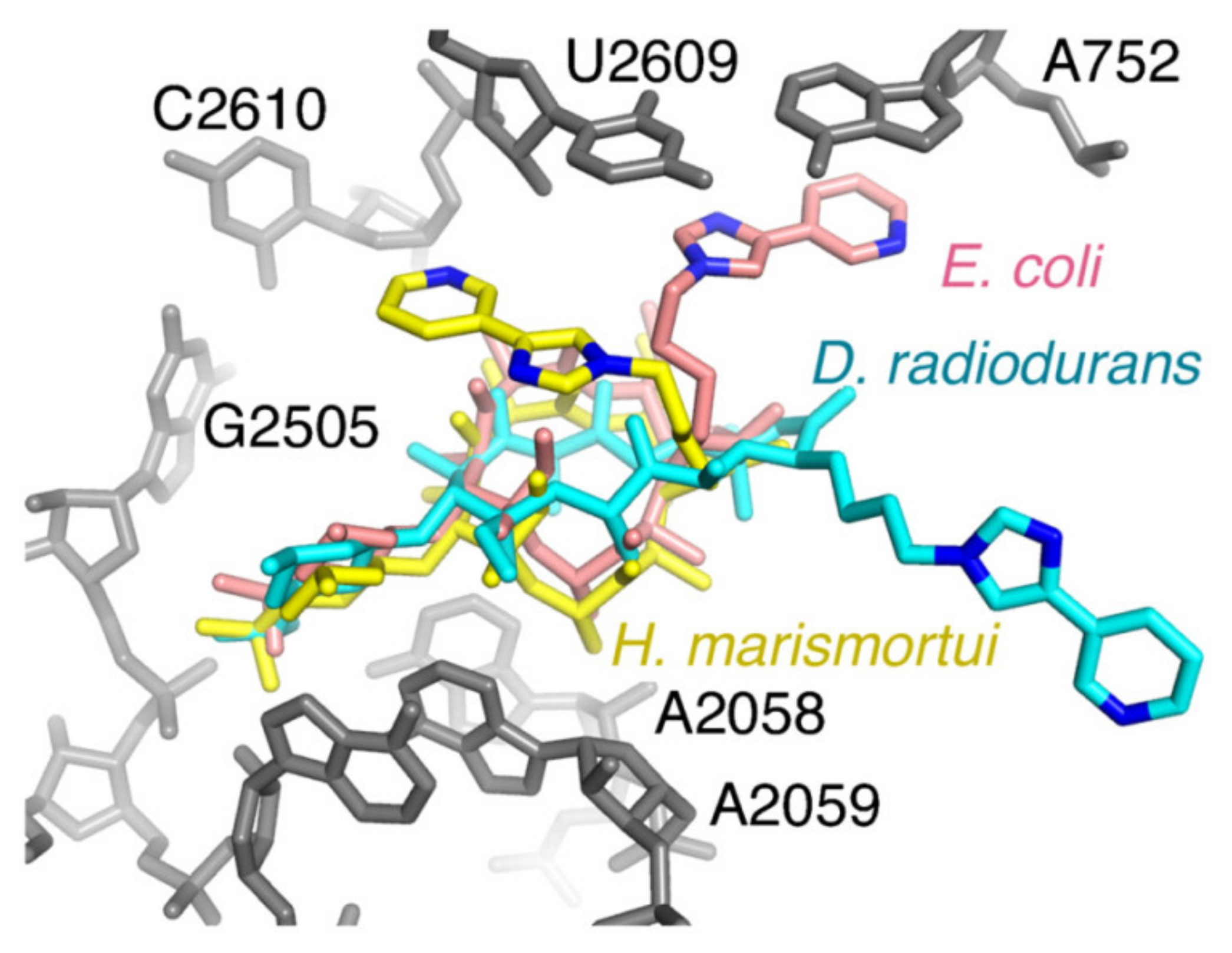