Solid platelet-rich fibrin (PRF) is produced with centrifugation tubes designed to accelerate clotting. Thus, activated platelets may accumulate within the fibrin-rich extracellular matrix even before centrifugation is initiated. It can thus be assumed that platelets and their growth factors such as transforming growth factor-β (TGF-β) are trapped within PRF independent of their relative centrifugal force (RCF), the gravitation or g-force. To test this assumption, we prepared PRF membranes with tubes where clotting is activated by a silicone-coated interior. Tubes underwent 210 g, 650 g and 1500 g for 12 min in a horizontal centrifuge. The respective PRF membranes, either in total or separated into a platelet-poor plasma and buffy coat fraction, were subjected to repeated freeze-thawing to prepare lysates. Gingival fibroblasts were exposed to the PRF lysates to provoke the expression of TGF-β target genes. We show here that the expression of interleukin 11 (IL11) and NADPH oxidase 4 (NOX4), and Smad2/3 signaling were similarly activated by all lysates when normalized to the size of the PRF membranes. Notably, platelet-poor plasma had significantly less TGF-β activity than the buffy coat fraction at both high-speed protocols. In contrast to our original assumption, the TGF-β activity in PRF lysates produced using horizontal centrifugation follows a gradient with increasing concentration from the platelet-poor plasma towards the buffy coat layer. View Full-Text
Keywords: fibrin; platelet-rich fibrin; TGF-β; gravitational force; buffy coat; platelet-poor plasma fibrin; platelet-rich fibrin; TGF-β; gravitational force; buffy coat; platelet-poor plasma
►▼ Show Figures 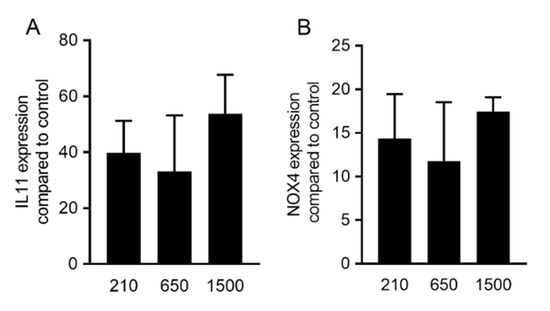