Natural Catalytic IgGs Hydrolyzing Histones in Schizophrenia: Are They the Link between Humoral Immunity and Inflammation?

Multiple Endocrine Neoplasia Type 1: The Potential Role of microRNAs in the Management of the Syndrome

Multiple endocrine neoplasia type 1 (MEN1) is a rare inherited tumor syndrome, characterized by the development of multiple neuroendocrine tumors (NETs) in a single patient. Major manifestations include primary hyperparathyroidism, gastro-entero-pancreatic neuroendocrine tumors, and pituitary adenomas. In addition to these main NETs, various combinations of more than 20 endocrine and non-endocrine tumors have been described in MEN1 patients. Despite advances in diagnostic techniques and treatment options, which are generally similar to those of sporadic tumors, patients with MEN1 have a poor life expectancy, and the need for targeted therapies is strongly felt. MEN1 is caused by germline heterozygous inactivating mutations of the MEN1 gene, which encodes menin, a tumor suppressor protein. The lack of a direct genotype–phenotype correlation does not permit the determination of the exact clinical course of the syndrome. One of the possible causes of this lack of association could be ascribed to epigenetic factors, including microRNAs (miRNAs), single-stranded non-coding small RNAs that negatively regulate post-transcriptional gene expression. Some miRNAs, and their deregulation, have been associated with MEN1 tumorigenesis. Recently, an extracellular class of miRNAs has also been identified (c-miRNAs); variations in their levels showed association with various human diseases, including tumors. The aim of this review is to provide a general overview on the involvement of miRNAs in MEN1 tumor development, to be used as possible targets for novel molecular therapies. The potential role of c-miRNAs as future non-invasive diagnostic and prognostic biomarkers of MEN1 will be discussed as well. View Full-Text
Keywords: MEN1; parathyroid glands; pituitary gland; GEP-NETs; miRNAs; circulating miRNAs; non-invasive biomarkers; personalized medicine MEN1; parathyroid glands; pituitary gland; GEP-NETs; miRNAs; circulating miRNAs; non-invasive biomarkers; personalized medicine
►▼ Show Figures 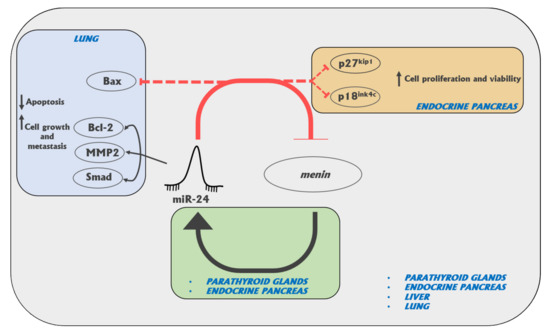