Anoectochilus roxburghii is a traditional Chinese herb with high medicinal value, with main bioactive constituents which are flavonoids. It commonly associates with mycorrhizal fungi for its growth and development. Moreover, mycorrhizal fungi can induce changes in the internal metabolism of host plants. However, its role in the flavonoid accumulation in A. roxburghii at different growth stages is not well studied. In this study, combined metabolome and transcriptome analyses were performed to investigate the metabolic and transcriptional profiling in mycorrhizal A. roxburghii (M) and non-mycorrhizal A. roxburghii (NM) growth for six months. An association analysis revealed that flavonoid biosynthetic pathway presented significant differences between the M and NM. Additionally, the structural genes related to flavonoid synthesis and different flavonoid metabolites in both groups over a period of six months were validated using quantitative real-time polymerase chain reaction (qRT-PCR) and high-performance liquid chromatography coupled with tandem mass spectrometry (HPLC-MS/MS). The results showed that Ceratobasidium sp. AR2 could increase the accumulation of five flavonol-glycosides (i.e., narcissin, rutin, isorhamnetin-3-O-beta-d-glucoside, quercetin-7-O-glucoside, and kaempferol-3-O-glucoside), two flavonols (i.e., quercetin and isorhamnetin), and two flavones (i.e., nobiletin and tangeretin) to some degrees. The qRT-PCR showed that the flavonoid biosynthetic genes (PAL, 4CL, CHS, GT, and RT) were significantly differentially expressed between the M and NM. Overall, our findings indicate that AR2 induces flavonoid metabolism in A. roxburghii during different growth stages, especially in the third month. This shows great potential of Ceratobasidium sp. AR2 for the quality improvement of A. roxburghii. View Full-Text
Keywords: Anoectochilus roxburghii; Ceratobasidium sp.; metabolome and transcriptome analyses; flavonoid; HPLC-MS/MS; qRT-PCR Anoectochilus roxburghii; Ceratobasidium sp.; metabolome and transcriptome analyses; flavonoid; HPLC-MS/MS; qRT-PCR
►▼ Show Figures 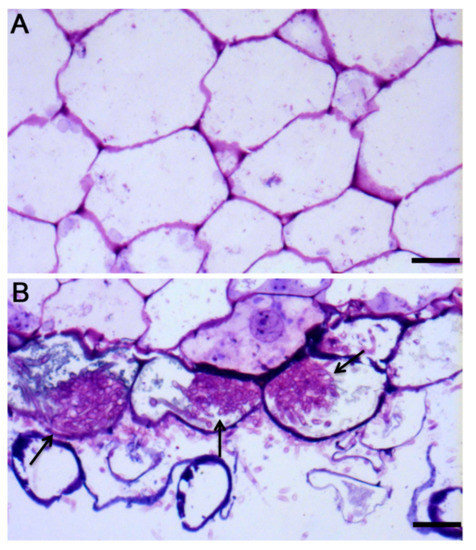