Challenges in Using Circulating Micro-RNAs as Biomarkers for Cardiovascular Diseases

Cellular autophagy is a widely-occurring conserved process for turning over damaged organelles or recycling cytoplasmic contents in cells. Although autophagy-related genes (ATGs) have been broadly identified from many plants, little is known about the potential function of autophagy in mediating plant growth and development, particularly in recycling cytoplasmic contents during seed development and germination. Castor bean (Ricinus communis) is one of the most important inedible oilseed crops. Its mature seed has a persistent and large endosperm with a hard and lignified seed coat, and is considered a model system for studying seed biology. Here, a total of 34 RcATG genes were identified in the castor bean genome and their sequence structures were characterized. The expressional profiles of these RcATGs were examined using RNA-seq and real-time PCR in a variety of tissues. In particular, we found that most RcATGs were significantly up-regulated in the later stage of seed coat development, tightly associated with the lignification of cell wall tissues. During seed germination, the expression patterns of most RcATGs were associated with the decomposition of storage oils. Furthermore, we observed by electron microscopy that the lipid droplets were directly swallowed by the vacuoles, suggesting that autophagy directly participates in mediating the decomposition of lipid droplets via the microlipophagy pathway in germinating castor bean seeds. This study provides novel insights into understanding the potential function of autophagy in mediating seed development and germination. View Full-Text
Keywords: autophagy; castor bean; gene expression; seed development; seed germination autophagy; castor bean; gene expression; seed development; seed germination
►▼ Show Figures 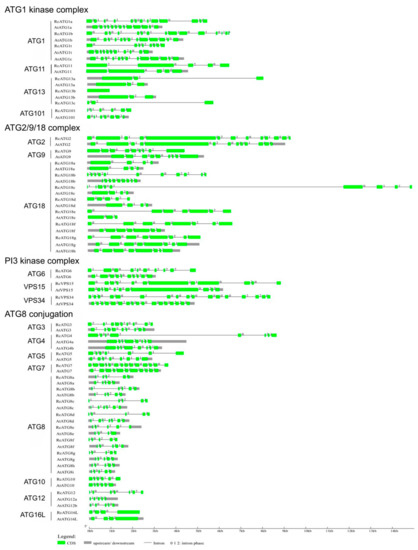