The Innovation Comes from the Sea: Chitosan and Alginate Hybrid Gels and Films as Sustainable Materials for Wastewater Remediation
Previous Article in Journal

Heat shock protein 27 (HSP27) is commonly involved in cellular stress. Increased levels of HSP27 as well as autoantibodies against this protein were previously detected in glaucoma patients. Moreover, systemic immunization with HSP27 induced glaucoma-like damage in rodents. Now, for the first time, the direct effects of an intravitreal HSP27 application were investigated. For this reason, HSP27 or phosphate buffered saline (PBS, controls) was applied intravitreally in rats (n = 12/group). The intraocular pressure (IOP) as well as the electroretinogram recordings were comparable in HSP27 and control eyes 21 days after the injection. However, significantly fewer retinal ganglion cells (RGCs) and amacrine cells were observed in the HSP27 group via immunohistochemistry and western blot analysis. The number of bipolar cells, on the other hand, was similar in both groups. Interestingly, a stronger neurofilament degeneration was observed in HSP27 optic nerves, while no differences were noted regarding the myelination state. In summary, intravitreal HSP27 injection led to an IOP-independent glaucoma-like damage. A degeneration of RGCs as well as their axons and amacrine cells was noted. This suggests that high levels of extracellular HSP27 could have a direct damaging effect on RGCs. View Full-Text
Keywords: glaucoma; heat shock protein 27 (HSP27); retinal ganglion cell degeneration; cell stress glaucoma; heat shock protein 27 (HSP27); retinal ganglion cell degeneration; cell stress
►▼ Show Figures 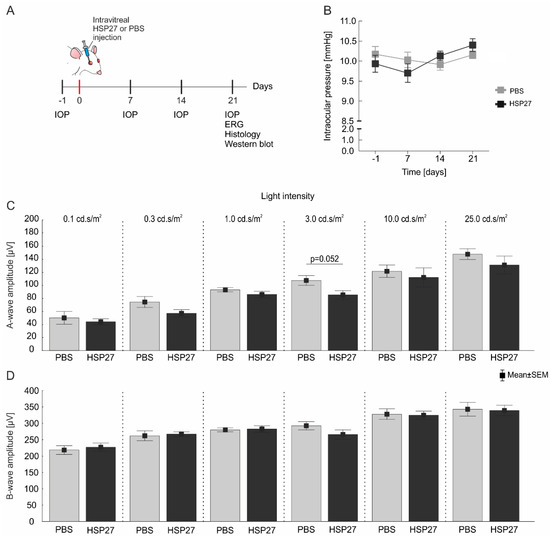