The IREG (IRON REGULATED/ferroportin) family of genes plays vital roles in regulating the homeostasis of iron and conferring metal stress. This study aims to identify soybean IREG family genes and characterize the function of GmIREG3 in conferring tolerance to aluminum stress. Bioinformatics and expression analyses were conducted to identify six soybean IREG family genes. One GmIREG, whose expression was significantly enhanced by aluminum stress, GmIREG3, was studied in more detail to determine its possible role in conferring tolerance to such stress. In total, six potential IREG-encoding genes with the domain of Ferroportin1 (PF06963) were characterized in the soybean genome. Analysis of the GmIREG3 root tissue expression patterns, subcellular localizations, and root relative elongation and aluminum content of transgenic Arabidopsis overexpressing GmIREG3 demonstrated that GmIREG3 is a tonoplast localization protein that increases transgenic Arabidopsis aluminum resistance but does not alter tolerance to Co and Ni. The systematic analysis of the GmIREG gene family reported herein provides valuable information for further studies on the biological roles of GmIREGs in conferring tolerance to metal stress. GmIREG3 contributes to aluminum resistance and plays a role similar to that of FeIREG3. The functions of other GmIREG genes need to be further clarified in terms of whether they confer tolerance to metal stress or other biological functions. View Full-Text
Keywords: expression pattern; metal stress; transporter; tonoplast; detoxification expression pattern; metal stress; transporter; tonoplast; detoxification
►▼ Show Figures 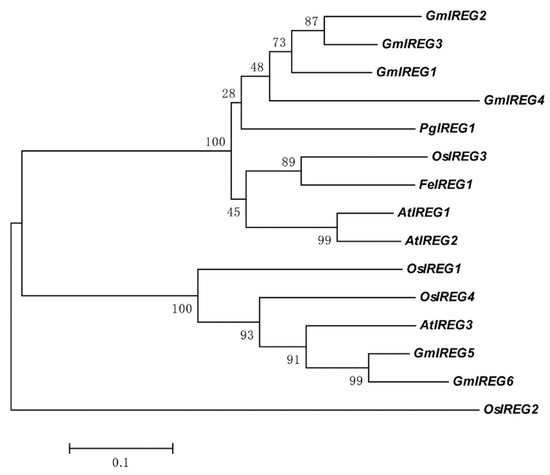