Stimulus-sensitive polymer drug conjugates based on high molecular weight N-(2-hydroxypropyl) methacrylamide (HPMA) copolymers carrying doxorubicin via a pH-dependent cleavable bond (pHPMA-Dox) were previously shown to be able to overcome multi-drug resistance. Nevertheless, a tumor type dependent differential response was observed. Although an improved and more selective tumor accumulation of pHPMA-Dox is generally achieved due to the enhanced permeability and retention (EPR) effect, little is known about the fate of these conjugates upon entering the tumor tissue, which could explain the different responses. In this study, we compared in vitro and in vivo accumulation and Dox-activation of pHPMA-Dox in three cancer cell line models (1411HP, A2780cis, HT29) and derived xenograft tumors using a near-infrared fluorescence-labeled pHPMA-Dox conjugate. Firstly, cytotoxicity assays using different pH conditions proved a stepwise, pH-dependent increase in cytotoxic activity and revealed comparable sensitivity among the cell lines. Using multispectral fluorescence microscopy, we were able to track the distribution of drug and polymeric carrier simultaneously on cellular and histological levels. Microscopic analyses of cell monolayers confirmed the assumed mechanism of cell internalization of the whole conjugate followed by intracellular cleavage and nuclear accumulation of Dox in all three cell lines. In contrast, intratumoral distribution and drug release in xenograft tumors were completely different and were associated with different tissue substructures and microenvironments analyzed by Azan- and Hypoxisense®-staining. In 1411HP tumors, large vessels and less hypoxic/acidic microenvironments were associated with a pattern resulting from consistent tissue distribution and cellular uptake as whole conjugate followed by intracellular drug release. In A2780cis tumors, an inconsistent pattern of distribution partly resulting from premature drug release was associated with a more hypoxic/acidic microenvironment, compacted tumor tissue with compressed vessels and specific pre-damaged tissue structures. A completely different distribution pattern was observed in HT29 tumors, resulting from high accumulation of polymer in abundant fibrotic structures, with small embedded vessels featuring this tumor type together with pronounced premature drug release due to the strongly hypoxic/acidic microenvironment. In conclusion, the pattern of intratumoral distribution and drug release strongly depends on the tumor substructure and microenvironment and may result in different degrees of therapeutic efficacy. This reflects the pronounced heterogeneity observed in the clinical application of nanomedicines and can be exploited for the future design of such conjugates. View Full-Text
Keywords: HPMA copolymer; polymer drug conjugates; pH-sensitive drug release; tumor microenvironment; chemotherapy resistance HPMA copolymer; polymer drug conjugates; pH-sensitive drug release; tumor microenvironment; chemotherapy resistance
►▼ Show Figures 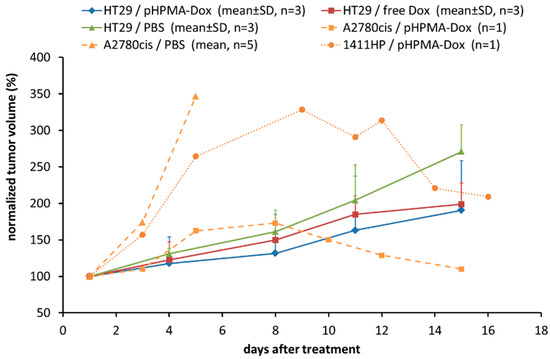