The root-knot nematode Meloidogyne graminicola is an important pathogen in rice, causing huge yield losses annually worldwide. Details of the interaction between rice and M. graminicola and the resistance genes in rice still remain unclear. In this study, proteome-wide analyses of the compatible interaction of the japonica rice cultivar “Nipponbare” (NPB) with M. graminicola were performed. In total, 6072 proteins were identified in NPB roots with and without infection of M. graminicola by label-free quantitative mass spectrometry. Of these, 513 specifically or significantly differentially expressed proteins were identified to be uniquely caused by nematode infection. Among these unique proteins, 99 proteins were enriched on seven Kyoto Encyclopedia of Genes and Genomes (KEGG) pathways. By comparison of protein expression and gene transcription, LOC_Os01g06600 (ACX, a glutaryl-CoA dehydrogenase), LOC_Os09g23560 (CAD, a cinnamyl-alcohol dehydrogenase), LOC_Os03g39850 (GST, a glutathione S-transferase) and LOC_Os11g11960 (RPM1, a disease resistance protein) on the alpha-linolenic acid metabolism, phenylpropanoid biosynthesis, glutathione metabolism and plant–pathogen interaction pathways, respectively, were all associated with disease defense and identified to be significantly down-regulated in the compatible interaction of NPB with nematodes, while the corresponding genes were remarkably up-regulated in the roots of a resistant rice accession “Khao Pahk Maw” with infection of nematodes. These four genes likely played important roles in the compatible interaction of rice with M. graminicola. Conversely, these disease defense-related genes were hypothesized to be likely involved in the resistance of resistant rice lines to this nematode. The proteome-wide analyses provided many new insights into the interaction of rice with M. graminicola. View Full-Text
Keywords: rice; root-knot nematode; Meloidogyne graminicola; compatible interaction; proteome-wide analyses rice; root-knot nematode; Meloidogyne graminicola; compatible interaction; proteome-wide analyses
►▼ Show Figures 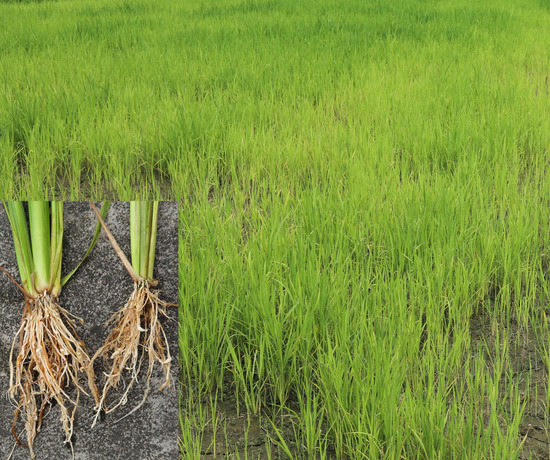