Inhibitory Effective Perturbations of Cilobradine (DK-AH269), A Blocker of HCN Channels, on the Amplitude and Gating of Both Hyperpolarization-Activated Cation and Delayed-Rectifier Potassium Currents

Effectiveness in the Block by Honokiol, a Dimerized Allylphenol from Magnolia Officinalis, of Hyperpolarization-Activated Cation Current and Delayed-Rectifier K+ Current

Background: Honokiol (HNK), a dimer of allylphenol obtained from the bark of Magnolia officinalis was demonstrated to exert an array of biological actions in different excitable cell types. However, whether or how this compound can lead to any perturbations on surface–membrane ionic currents remains largely unknown. Methods: We used the patch clamp method and found that addition of HNK effectively depressed the density of macroscopic hyperpolarization-activated cation currents (Ih) in pituitary GH3 cells in a concentration-, time- and voltage-dependent manner. By the use of a two-step voltage protocol, the presence of HNK (10 μM) shifted the steady-state activation curve of Ih density along the voltage axis to a more negative potential by approximately 11 mV, together with no noteworthy modification in the gating charge of the current. Results: The voltage-dependent hysteresis of Ih density elicited by long-lasting triangular ramp pulse was attenuated by the presence of HNK. The HNK addition also diminished the magnitude of deactivating Ih density elicited by ramp-up depolarization with varying durations. The effective half-maximal concentration (IC50) value needed to inhibit the density of Ih or delayed rectifier K+ current identified in GH3 cells was estimated to be 2.1 or 6.8 μM, respectively. In cell-attached current recordings, HNK decreased the frequency of spontaneous action currents. In Rolf B1.T olfactory sensory neurons, HNK was also observed to decrease Ih density in a concentration-dependent manner. Conclusions: The present study highlights the evidence revealing that HNK has the propensity to perturb these ionic currents and that the hyperpolarization-activated cyclic nucleotide-gated (HCN) channel is proposed to be a potential target for the in vivo actions of HNK and its structurally similar compounds. View Full-Text
Keywords: honokiol; hyperpolarization-activated cation current; current kinetics; pituitary cell; olfactory neuron honokiol; hyperpolarization-activated cation current; current kinetics; pituitary cell; olfactory neuron
►▼ Show Figures 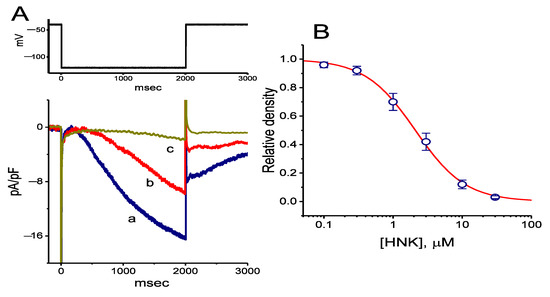